They say, “It takes a village…” I don’t know the rest of the quote, so we’ll stick with that. Our crew was just as much an integral part of The WunderTRE(k) Brandfomercial as the cast was. In this blog post we’re going to talk about each of their parts and how they helped crush this project out of the park.

Hopefully, you don’t need much more introduction to Ross since you’ve read our blog every time we released it and have made yourself very familiar with our “About the Hamil Bros” Page, right? Okay, if you haven’t, make sure to click that link and check the page out. For those of you too lazy to do even that, Ross is the Creative Director of Hamil Bros Studios as well as pretty much every project we produce. Ross was really the driving force behind the production and takes full credit for putting the brakes on the original concept for WunderTRE(k). Ross really drove this project in an entirely different, crazy direction and there’s much to say for his tenacity. It took him about three days, by our calculation, to write out the script and then consulted Jacob on it. Ross and Jacob agree that this was Ross’ true directorial debut, although you could argue that “Curse of the Were-Pa!” was really that debut. He directed with confidence and finesse bringing this seven minute, hilarious ad to life. That’s right, you heard me, seven whole minutes. Don’t believe me. Watch it now!

Ross was also the post production editor of the ad as well as colorist, VFX artist, and post production sound mixer. If you like the color, the “WunderTRACK” sign in the track scene, or the sounds make you laugh, you can attribute it to Ross’ incredible work. 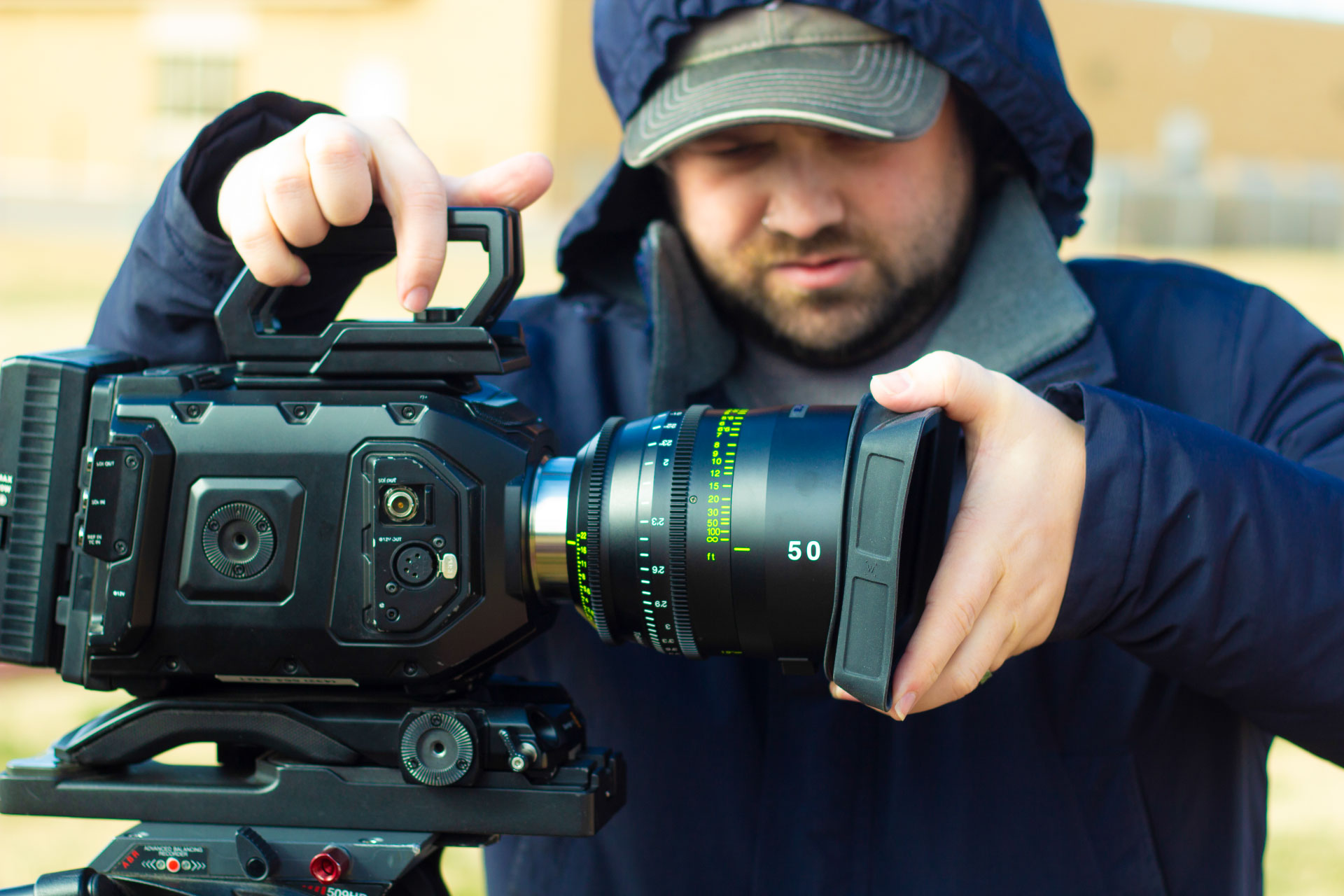 When you have a total crew of seven for an entire shoot (really four on any given shoot, and down to even just two), everyone winds up taking on many hats. Jacob has quite the collection of hats and he wears each proudly on set. This title says assistant director, but there was a lot more to that, as there was to anyone’s “title” on WunderTRE(k). In preproduction, Jacob helped edit the script and added a joke here and there, but mostly left it as is, because he couldn’t see any improvement. His skills were really put to the test looking for additional cast and locations for the shoot. Also, he did make a short (okay let’s get the laughs out now about this joke) appearance in this Brandfomercial, during the track scene.

Once it got down to Post Production, Jacob was heavily involved in designing all the motion graphics. This is his favorite Motion Graphics bit he’s ever put together. He also made a small contribution to some of the sound design, particularly in the shower scene as well as was the foley artist for all the body movement in the ad. You can read all about that in the blog, WunderTRE(k)- The Sound of Madness. 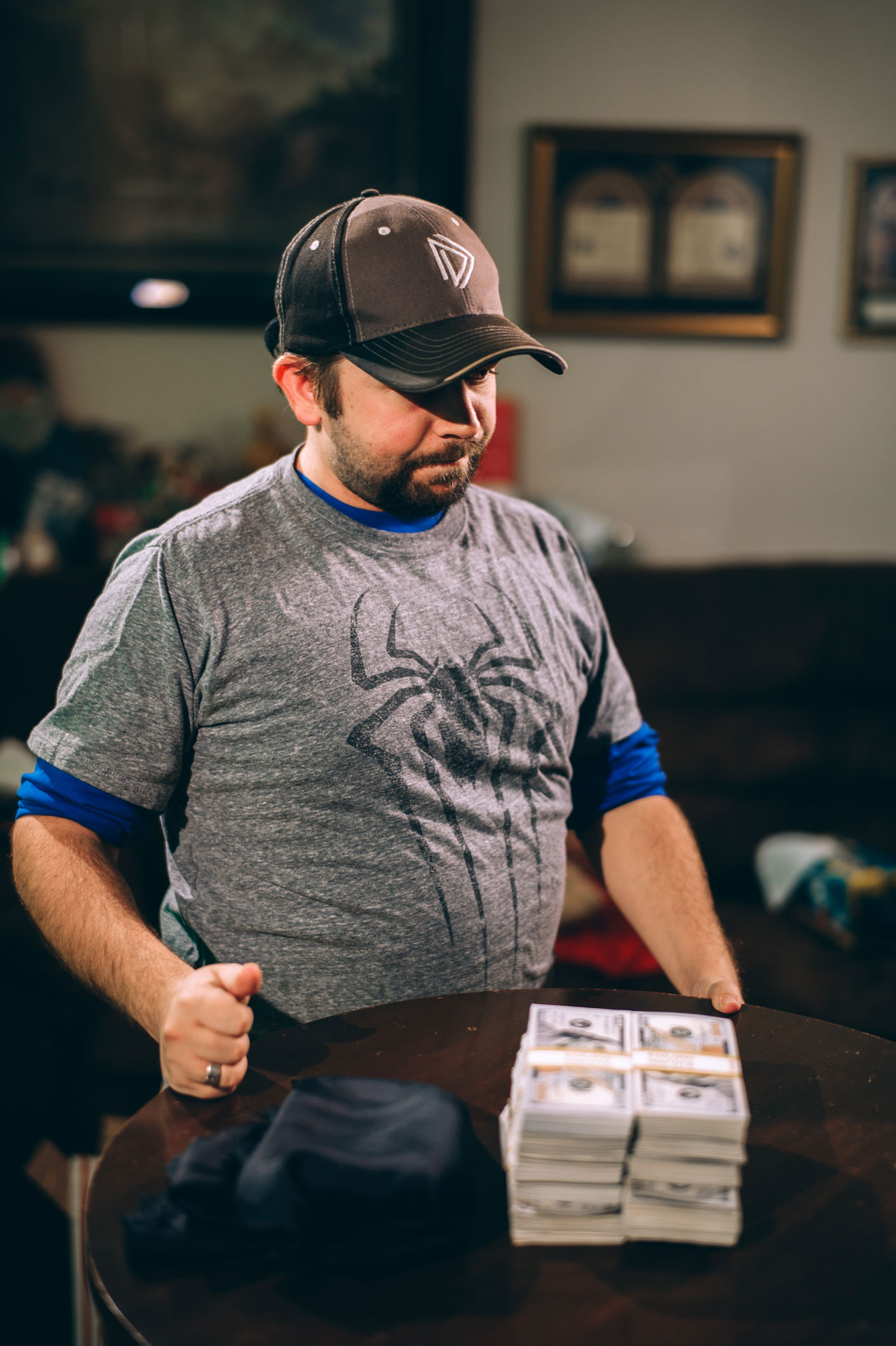 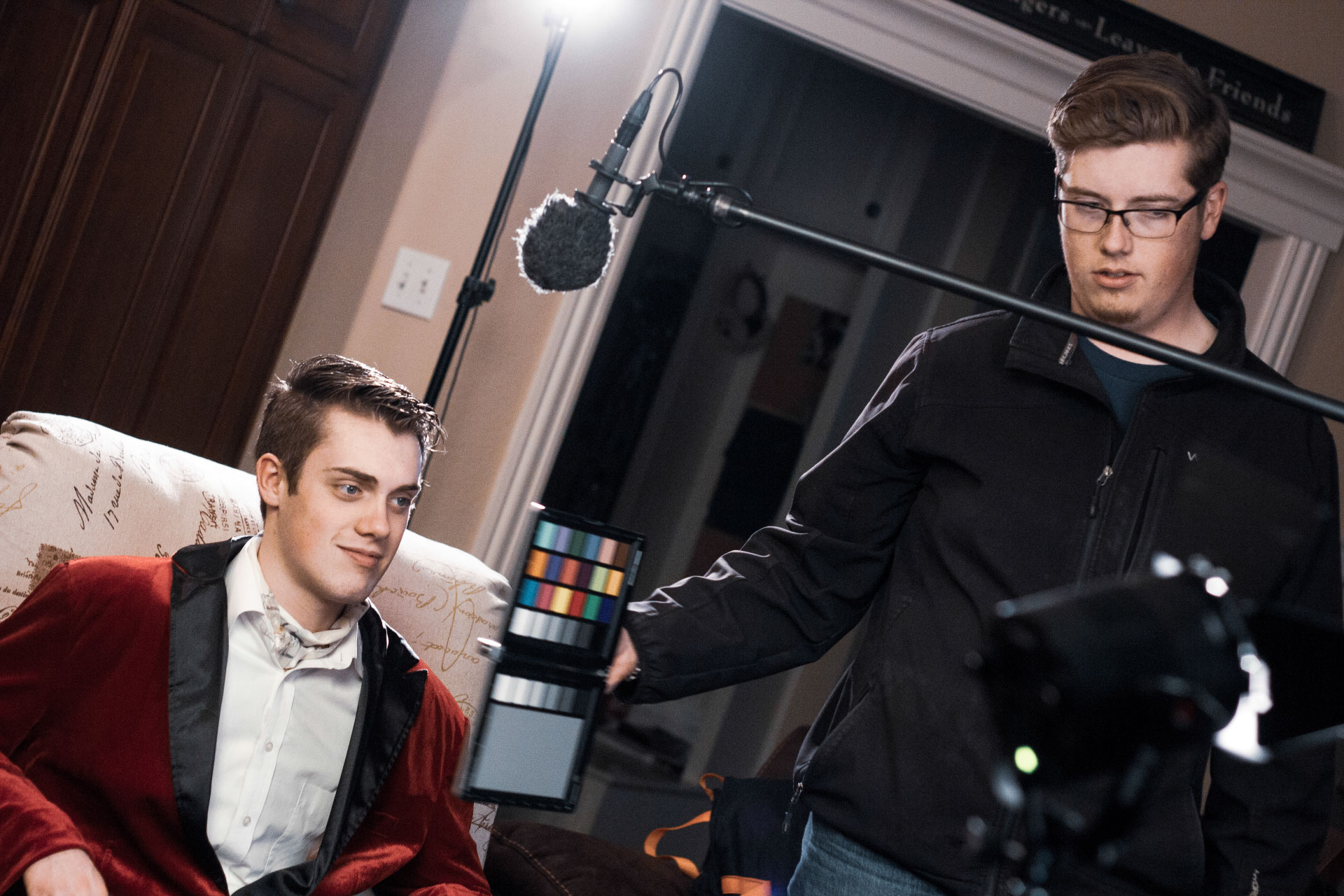 We love Dansby and that ought to be the first thing we say about him. Josh is a hard working guy who joined us in the summer of 2016 for the bulk of the shooting of Cinema Sound. We’ve had the pleasure of sub contracting him as much as possible for every job we do. Sadly, however, he’s now moved on to a full time position at Texas Tech Health Sciences Center.

It had something to do with a “paycheck he could rely on” and how we “didn’t really listen to him,” or something like that, I don’t know, I wasn’t really paying attention. Anyway, for this being his last production with us for the foreseeable future, he really rocked! He’s always 100% willing to do anything and everything we ask of him, and when it comes to building a team, that’s an invaluable characteristic to have. In this Brandfomercial, Josh was mostly an Assistant Camera/ Grip / Swing, which means we just had him do a little bit of everything. He’s a great kid (young man) and we’re hoping to ramp things up where we can hire him full time to kick butt and take names as a Hamil Brother. 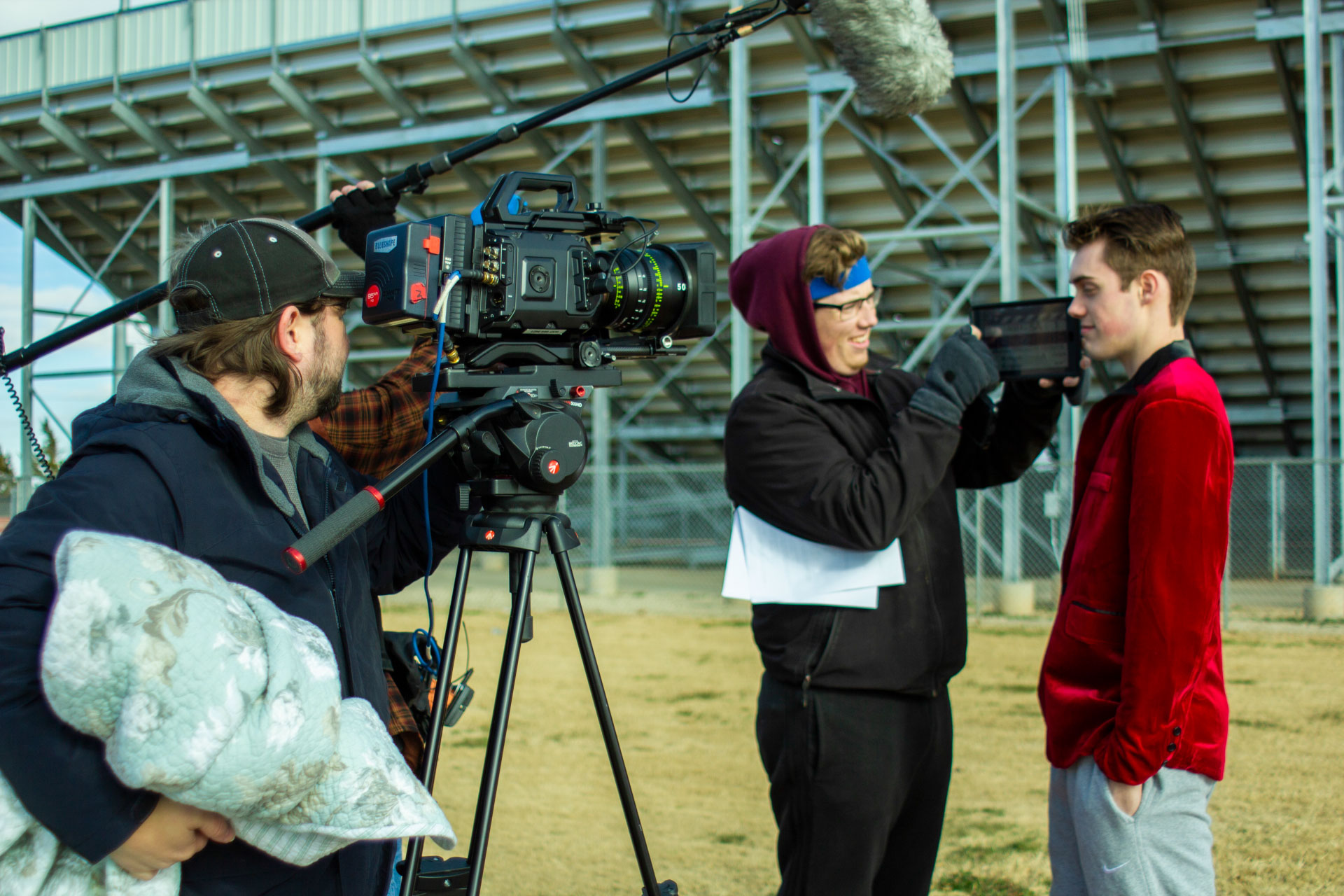 “Working on the WunderTrek ad was an absolute blast! The amount of creative collaboration from the whole crew was not only hysterical in the moment, but translated well in the end. I had such a great experience with Jacob, Ross, Scott, and Coby! This kind of project is why I love working in this industry and this crew made it special!”  – Josh Dansby

Hire people you appreciate and you never have to wonder if they’ll come through in a pinch. This doesn’t describe Scott at all, but I thought it was a cool quote to kick off a paragraph. Just kidding. This really is Scott. He’s been in the film industry for a long time, and when you do that for long enough, you get taken advantage of and asked to do a LOT more typically than whatever you’re being paid. That treatment can almost ruin a career when you’re searching for creative fulfillment. We love bringing Scott on because he’s a phenomenal sound recordist. He’s got the gear and he’s got the knowledge and experience to rock sound on set.

There is nothing more valuable than a sub contractor that you know is going to take care of his stuff. But, it wouldn’t Scott without plenty of sarcasm and quips about the incompetence of camera people. He does it in jest, but we really think he keeps a diary of “ways to troll camera people” under his pillow at night. To each his own, right? Scott made this project shine, due to his hardworking nature, and as soon as he’s done taking care of his primary assignment on set, he’s always asking “What can I do, now?”  Hire Scott, he’s good people. Also check out his website where he does weird, yet totally awesome stylized character shoots of himself.

“For sound, we went straightforwardly professional— quality boom mic into a double system recorder.  No lav mics, no recording into cameras, or any of that fuss. We just needed a simple and clear, one-man dialogue track.” – Scott Ross 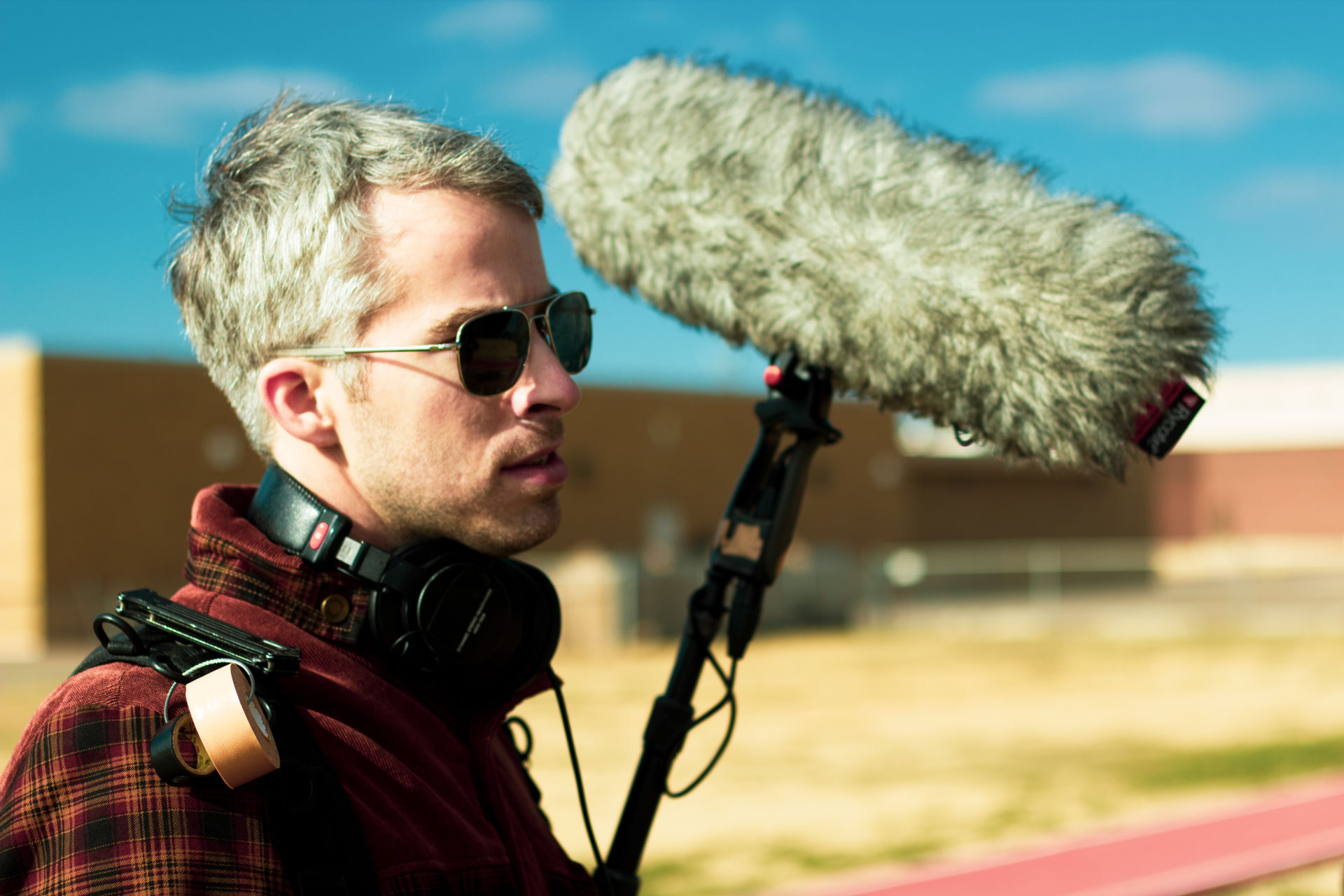 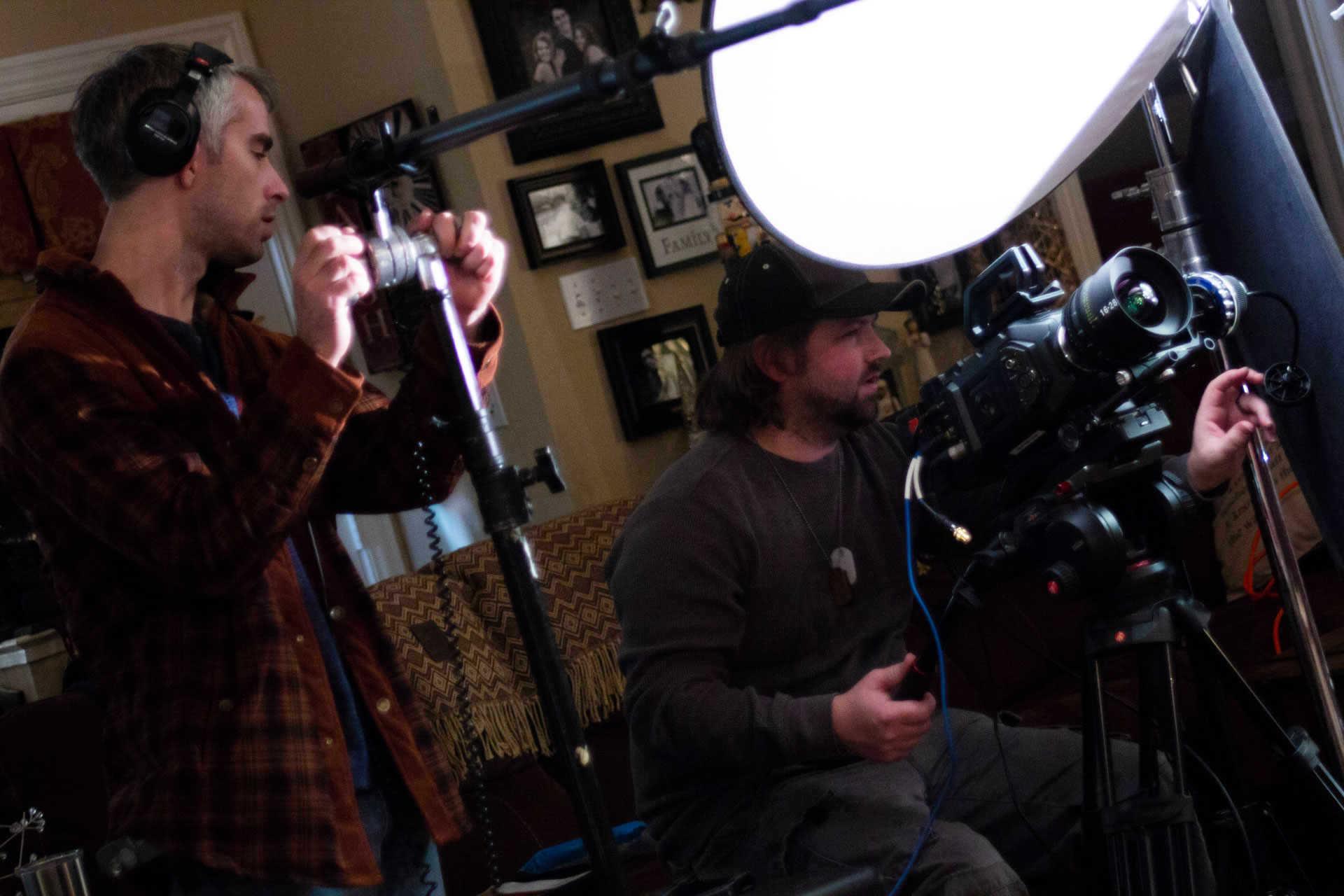 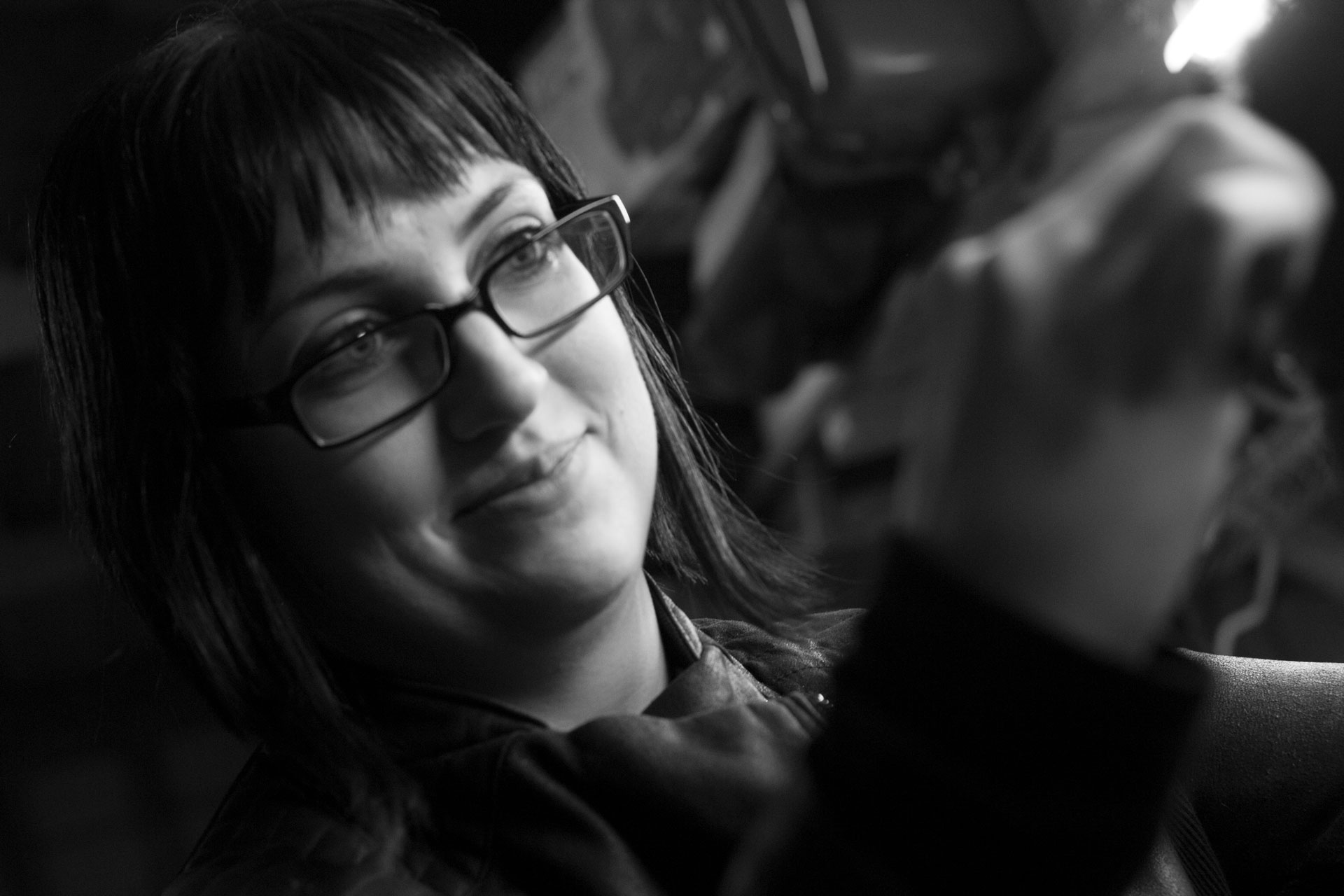 We first got wind of Lindsey (Looks to Kill HMUA) when we were looking for a prosthetic makeup artist in the fall of 2017. We needed someone who could make our actors truly look like cavemen for our AODC 2018 Super Bowl Ad. Someone put us in touch with Lindsey because they were at her salon (I hear she does GREAT HAIR) and saw one of her monster like prosthetic creations. 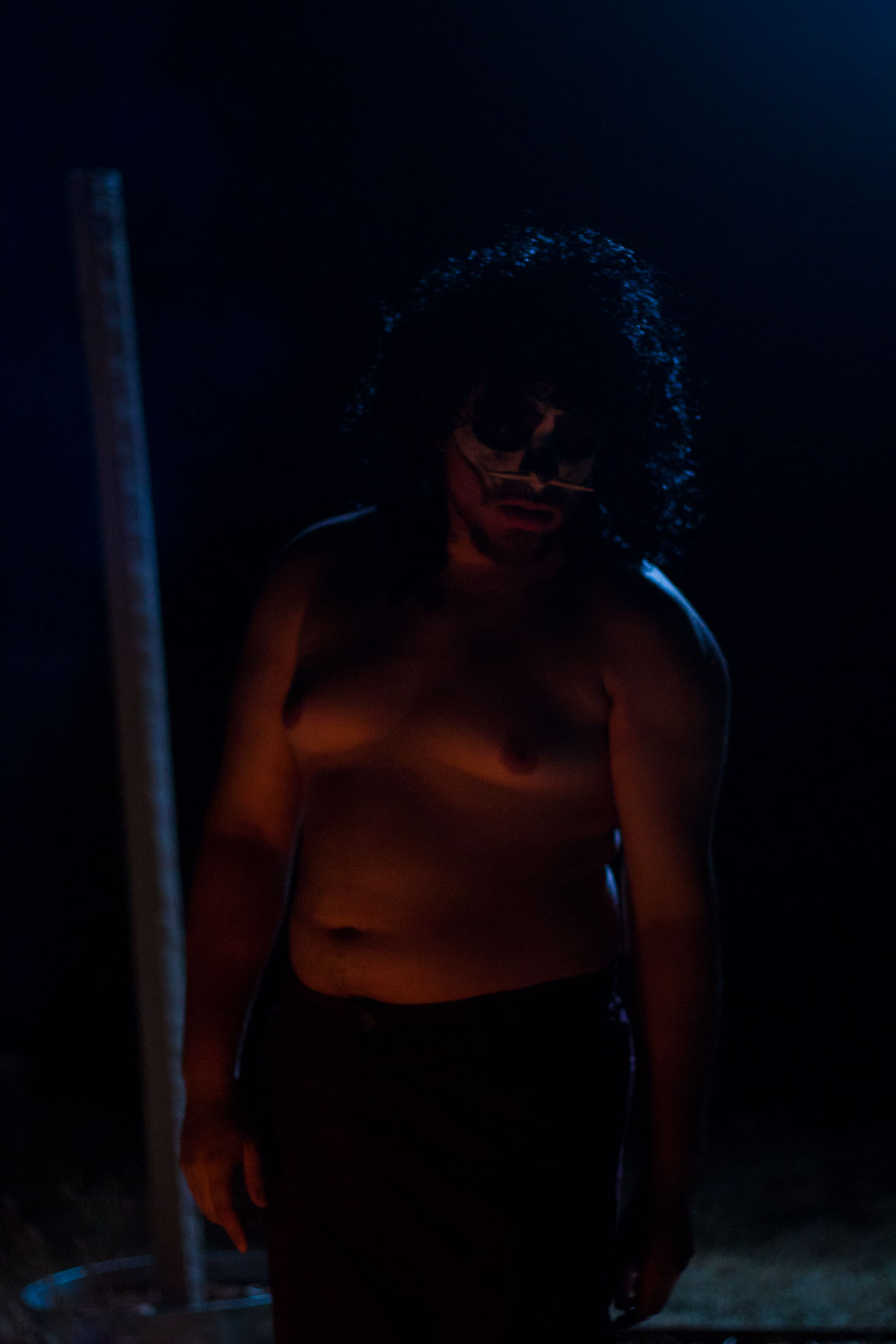 After doing some digging, we found out who she was and the rest is history. Lindsey played a key role in WunderTRE(k) by doing hair and makeup or HMUA (the last A is for Artist, but that’s just the best short form) on Ian who played the Voodoo Doctor. We will keep going back to Lindsey because she ROCKS and like Scott, we can trust her to do her job. I know I’ve said it a lot, but this is so valuable on a set. You NEED to be able to trust your team, or you will inevitably crash and burn. Lindsey is a rock star and we highly recommend her if you need hair and makeup for anything. If you want to do something freakishly cool for Halloween, however, I’d suggest talking to her now and getting something booked. She gets pretty busy around then if you can imagine.

“WunderTRE(k) was a great project to start the new year with. I enjoyed making the magnetic bone for the voodoo character. Hamil Bros put together a fun and supportive crew once again.”  – Lindsey Stanford

You better have read about Steven in the Cast Blog for WunderTRE(k) because I don’t feel like explaining how we met him again. We consulted Steven for the pyrotechnics in the voodoo doctor scene. We knew he likes setting fires on facebook, as well as at the camp ground. A week or so before the Voodoo Doctor scene, Steven actually did a facebook live video for us to do some testing on what combination would make the fire blow up with a pinch of magic powder from the Voodoo Doctor. We saw things we liked and decided on a course of action. Don’t think I’m going to forget Steven’s Partner in Crime and brother-in-law, Travis Burt. They both were in the live video and came to set ready to blow things up. They didn’t disappoint. 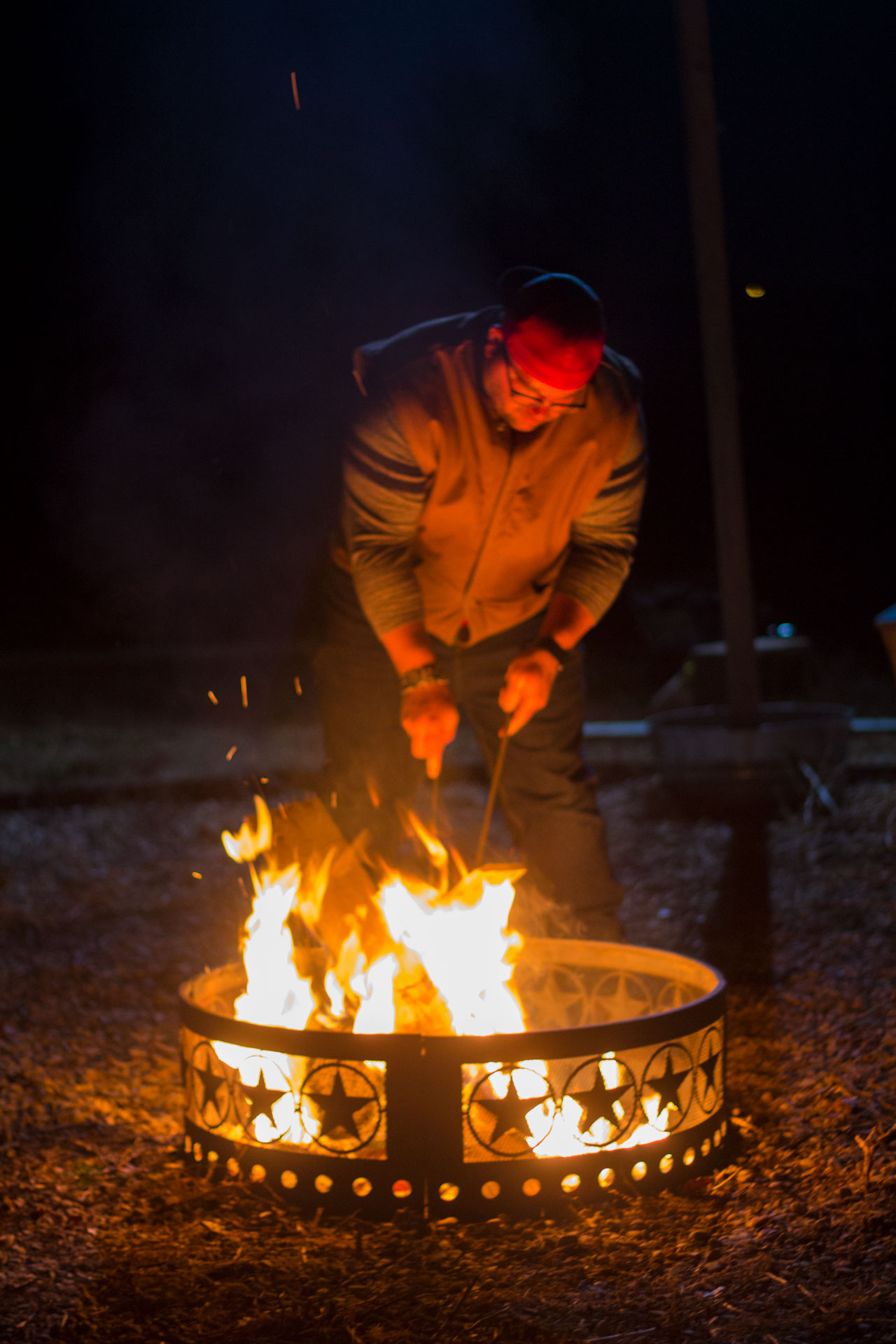 As you saw in WunderTRE(k), that flame is HUGE when Ian gets done chanting and throws his magic powder into the fire. Travis and Steven were there for preventative measures and safety as much as they were to make the fire HUGE. According to them, they do quite a bit of camping, so they’re familiar with how to work with fire. Fun Fact: Did you know that it’s better to put out a camp fire with water instead of dirt? That sounds like a dumb question, but I asked Steven about this. He told me it’s better to use water because it puts the fire out straight up. If you use dirt, even though it puts out the initial blaze, the fire can actually move into the earth and burn/destroy a tree’s entire underground root system without you ever knowing.

“As far as the playing with Fire goes; I wanted to go bigger but the scene did not call for anything more. Starting a fire and making it go boom was truly a labor of love. I couldn’t have done it without the help of my brother Travis. We played with a few different recipes prior to the shoot

and even tried one alternate recipe during. Ultimately we ended up with a product that made everyone involved proud. I would say the most difficult thing about the entire process was trying not to laugh through the process. I think I speak for Travis as well when I say we thoroughly enjoyed it, and the next time you see a Hamil Brothers Fire/ explosion it will be bigger and better!” – Steven Bailey

That wraps the entire crew of folks that we utilized for WunderTRE(k)! We hope you enjoyed the blog! If you want to be kept in the loop make sure to turn on post notifications for Hamil Bros on Facebook and Instagram, and also subscribe to our “Key Frames” Newsletter below!

Wasn't that fun??? If you want to sign up for unlimited fun and awesomeness, fill out this form and we'll make sure you get all the website content hot off the press!