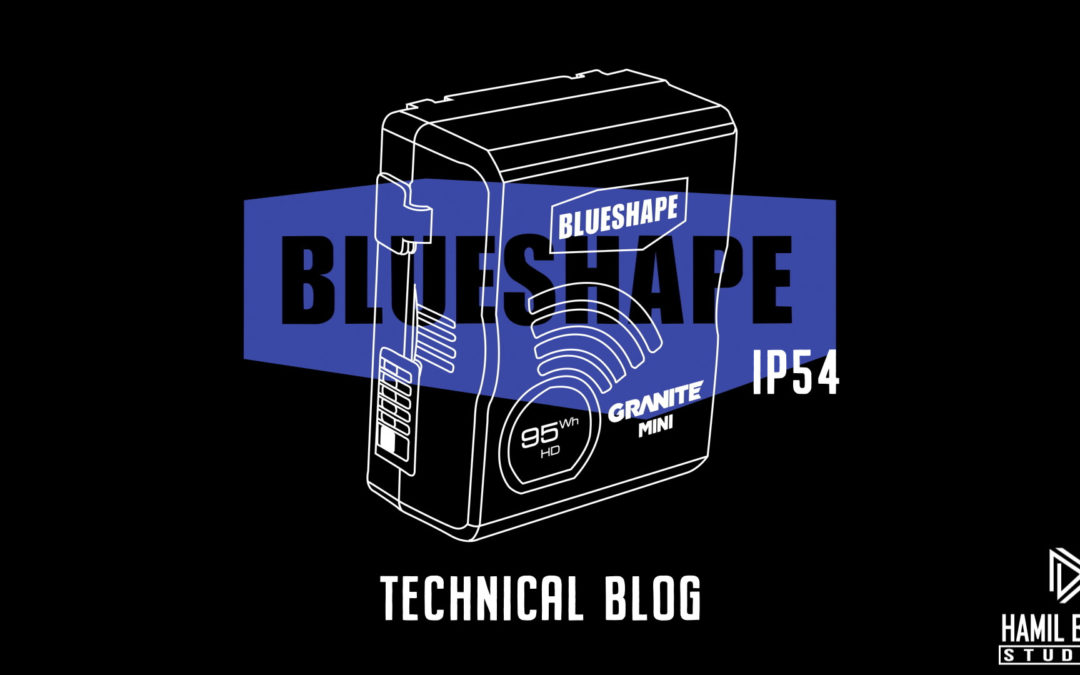 Hey folks! We’ve had a pretty massive response on our Blueshape IP54 rating video we produced a few weeks ago! So we decided to do a little bit more technical blog on it beyond just the project post. We try to keep those relatively non-technical just so potential customers can come see what we executed in the video production per the client’s requests. This blog is going to dive into the technical video production itself for anyone who wants to know how we lit, shot, edited, and delivered it. We’ll just give you a small refresher on the original video.

The pre-production for this video didn’t take a whole lot of time nor much work. We have a tendency, Ross especially, to have a script just strike us like lightning in the brain. He’s done a majority of the writing for us over the last few years and it’s crazy how he gets on a roll. We wind up with some pretty hilarious ideas and they all spawn from his brain finding the right path. Most of our productions are his brain children. I have one every once in a while, but for the most part, they all spawn from his mind.

The production really didn’t take us that long. We shot it all on a Friday afternoon at our parents house in their kitchen. The parts that took the longest were probably the lighting and blocking of the motion and movement. When you do a one take shot or a “oner” as we call it, you have to make sure it’s executed near perfection. We’ll jump into the lighting first, then hit the actual blocking of the shot.

If you don’t care about the technical aspect of this shoot, then read no further and you can continue to be happy with your life. Video production takes much more time and work than just pressing record on a camera. If you’ve followed us for a while, or have been on any of our shoots, you understand this. People are usually first impressed by what we take to light a shot or shots. So we’ll break down the lighting for you nerds out there.

The lighting on this PSA was really pretty simple. I think, by the time I was done, I only utilized four lights total. Everyone who starts lighting early in their experience with it tend to overlight instead of finding the perfect balance. I’m super guilty of this. Luckily, we were taught that less can be more early on. So for me and I think most cinematographers it’s about what helps the story. The story should drive EVERY SINGLE ASPECT of your shoot. It should drive light, camera motion, music, editing, everything. 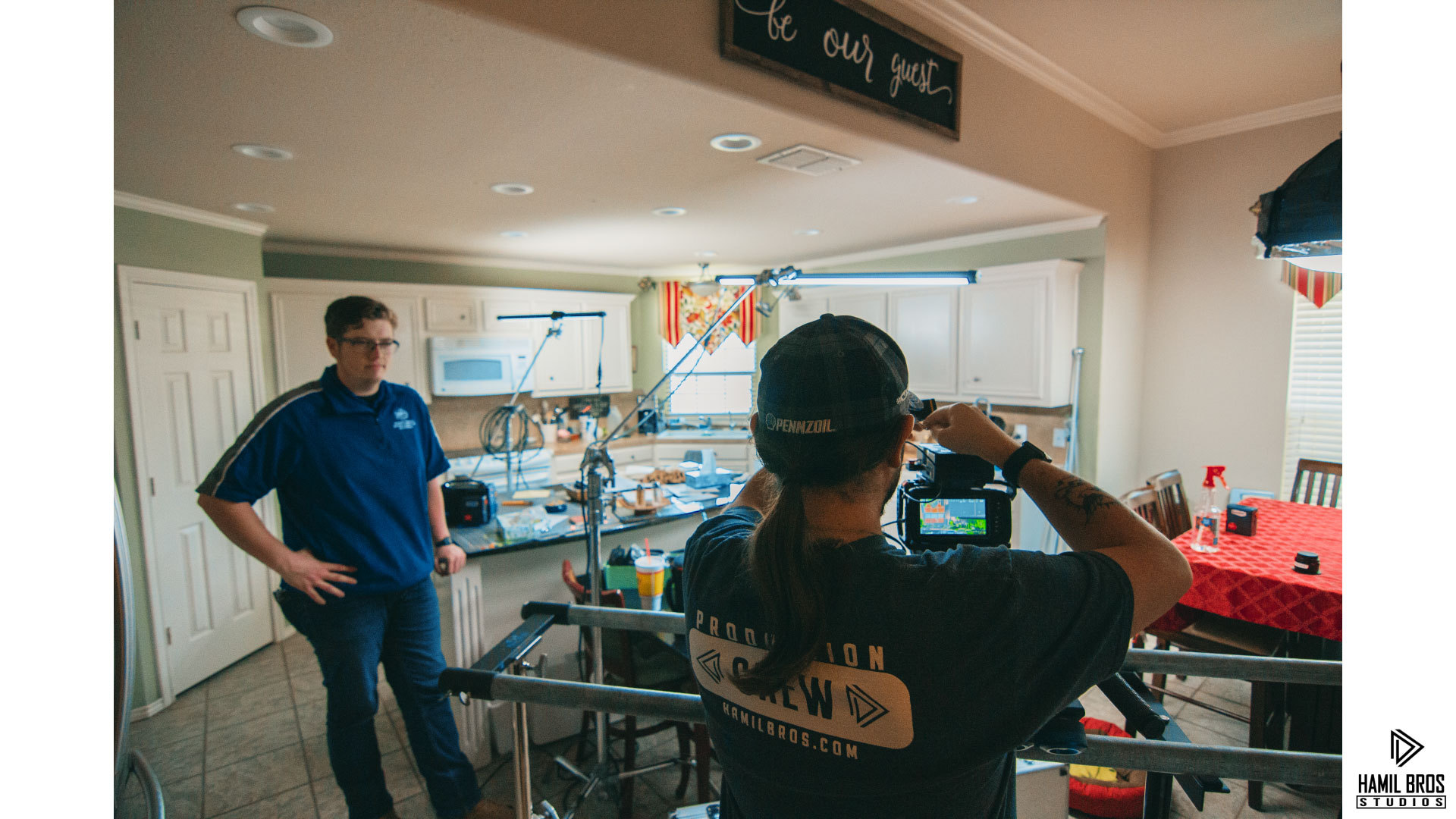 We wanted this psa to feel like an extremely cheesy home style cooking show. When it comes to lighting those shows and the sound stages, it’s literally blasting light from every direction possible. Not that we took that approach here, but we kept that in the backs of our minds. We’ve been trying more and more to light only with LED technology, mostly because it those lights are already daylight color temperatures. We had a lot of natural light coming in through the windows of the kitchen and dining room, so we had to have lights match that. We began by keying the shot with our Quasar Science 4 ft crossfade LED tubes. The first actually keyed Ross better than I had hoped, because he spends the first part of that shot looking over his shoulder, which gave us a nice, soft rembrandt light on his cheek. As he moves down the counter, camera right, we have a second Quasar Crossfade 4 ft LED tube just over the camera to front light him. This light kinda flattened out the shot and doesn’t cause a lot of shadowing, but it filled the frame and balanced the shot from falling into darkness once he left his first position. The third position, which is the product shot of the batteries on the table, was keyed by a 7” Quasar Q LION in a Matthews Matthelini clamp on a Matthews baby stand just giving a nice front fill to the batteries. 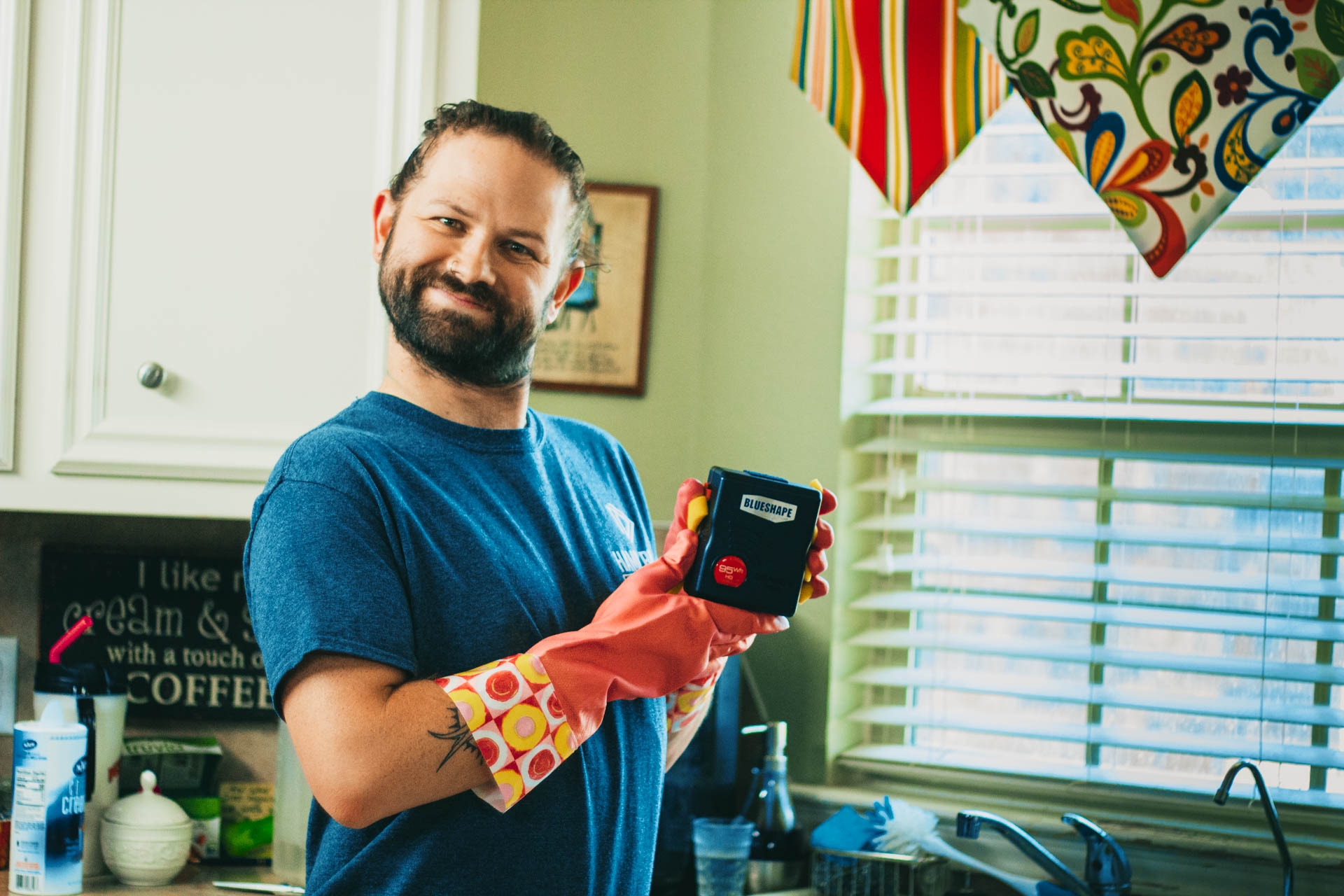 We always light to have back lights on talent because they help separate the talent from their background. In the first position, the back light is just the natural light coming from the window and it gives Ross a pretty nice side/back light. There isn’t really a back light in the second position where I’m being sprayed in the face. We didn’t have any available lights. Lastly, we had this really beautiful top light built to put a really soft pool of light on the batteries. That was an Aputure 300D Mki with their lantern attachment. It was a cross key of sorts to light Ross’ face as he placed the battery on the table, as well as back lighting the batteries as they sat there.

Blocking means planning out your shot. Not just where the camera is going to land, but also where the talent is going to stand to make sure it looks best on camera. Blocking in this ad was pretty paramount, because everyone has to know where to start and stop. That way the camera isn’t making major adjustments because they overshot the talent or vice versa. The best blocking doesn’t usually register to the audience, because it isn’t inherently noticeable. If that’s the case, that means you did it right. We had to find our 3 positions and make sure that all the interactions that took place in each were exact and precise. Josh Dansby operated the camera for this PSA and he did a remarkable job considering he had to operate the camera as well as pull focus. He had to tell us what the camera was seeing and where we had to stand to make sure each position was effective. Don’t you think he did a pretty great job? 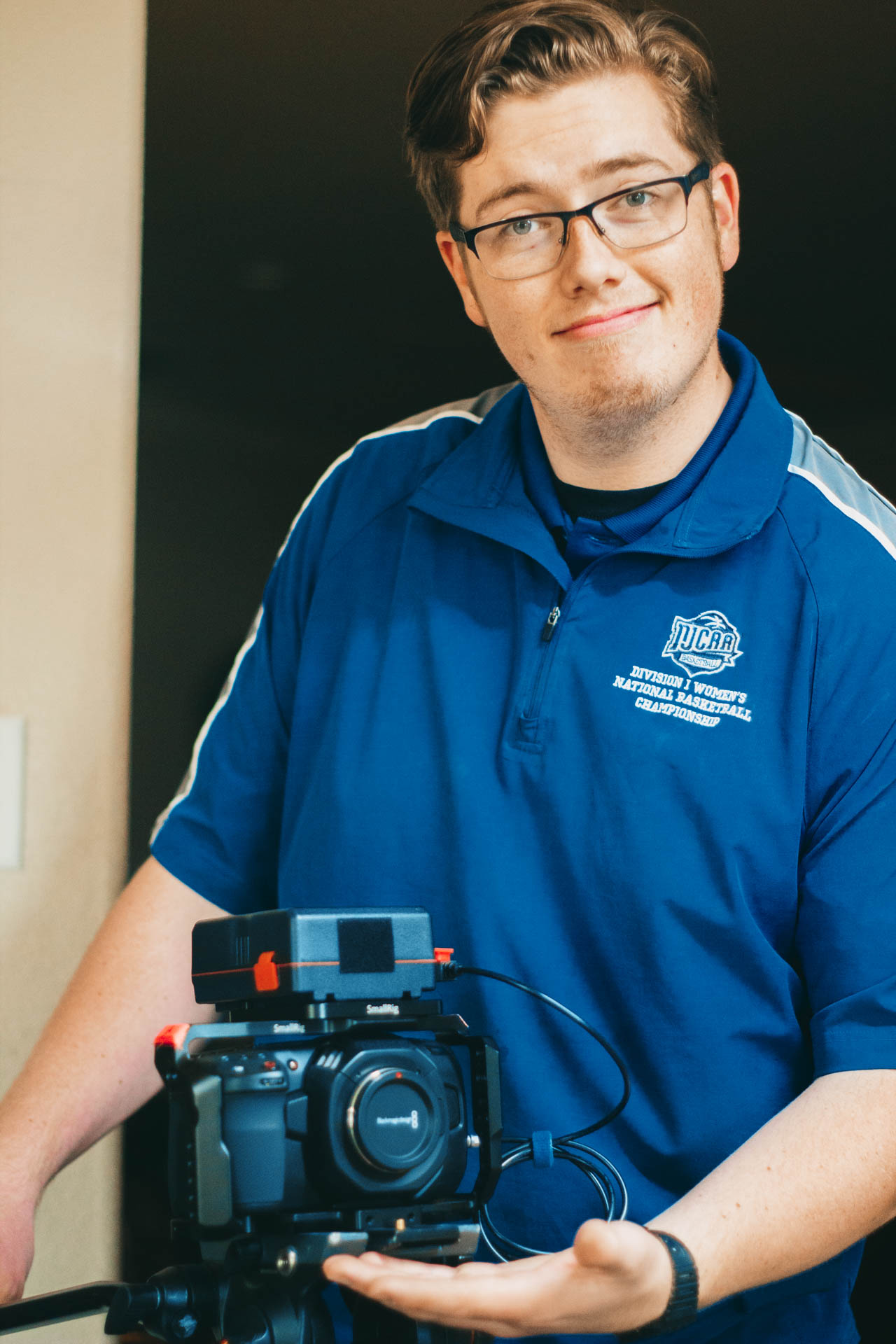 Post production on this video is actually more involved than you think. Perhaps, it’s not in the way you think though. There was relatively little editing being done since it’s a oner. Besides cutting the opening and the ending, there wasn’t much to do in the edit. Where the post really stands out is sound, VFX, and motion graphics.

Sound, as you know we believe, is incredibly important. Good sound makes a good video a great video and bad sound can make a good video a terrible video. Remember how we wanted that cheeseball cooking show feel? Well how better to do that than adding “live studio audience” reactions? We have a pretty massive sound library and Ross found the perfect studio audience to laugh, almost sarcastically at the different actions. To me, they sound like they don’t actually think it’s funny but are being told to laugh, which works in our favor. Besides dialogue clean up there wasn’t much more sound done minus the twinkle when the battery is first revealed out of the sink. I remember the first time I watched it, I was cackling because it was EXACTLY what we wanted. Great job, Ross!

VFX gets an honorable mention. I don’t believe we really had to do any VFX work besides adding the twinkle to the battery when Ross pulls it out of the sink. For that I used a RED Giant universe plugin called Glimmer. It gave the PERFECT cheesy, mid 90’s sparkle to that battery that haunts our nightmares. 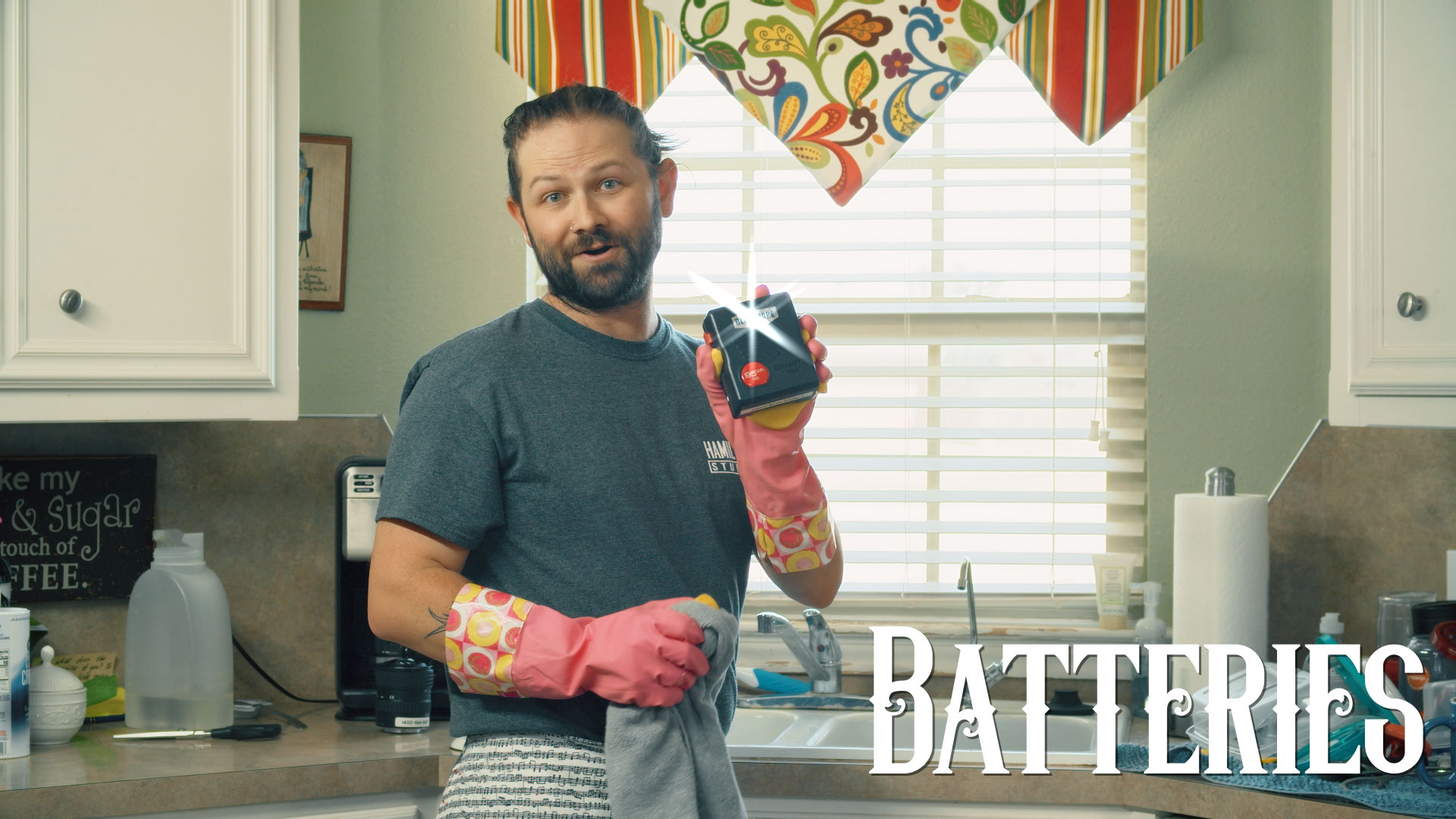 When I do motion graphics, I utilize them to drive a point home. In this particular PSA, I wanted them to highlight specific words or phrases that Ross was saying such as “Cleaning, Sanitizing” or “IP54 Rated”. I feel like this always visually drives the message home and people remember it when they read it as well as hear it being talked about. Plus, I just got this new font pack and I had to make use of it. I can always make a reason ha! 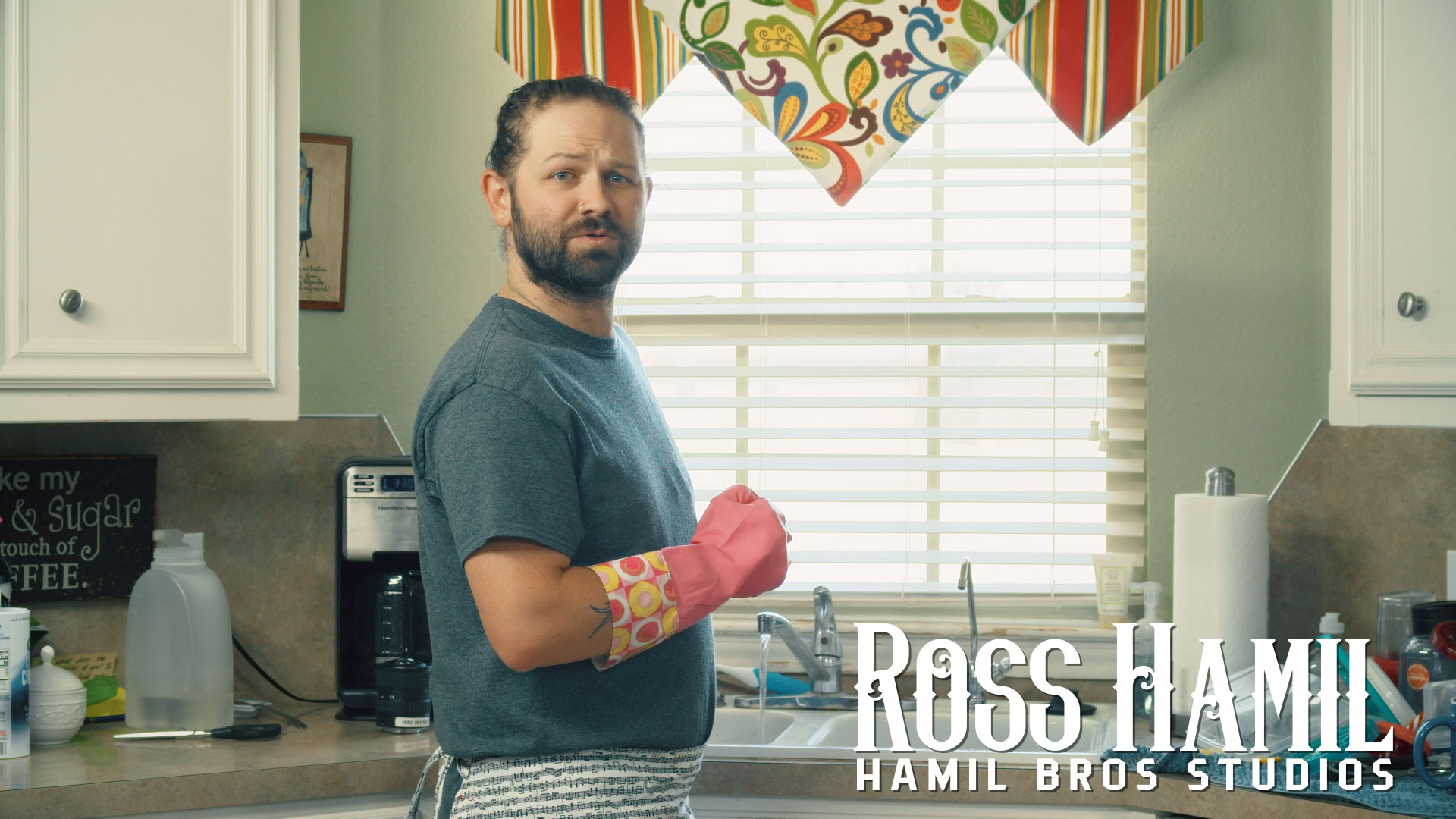 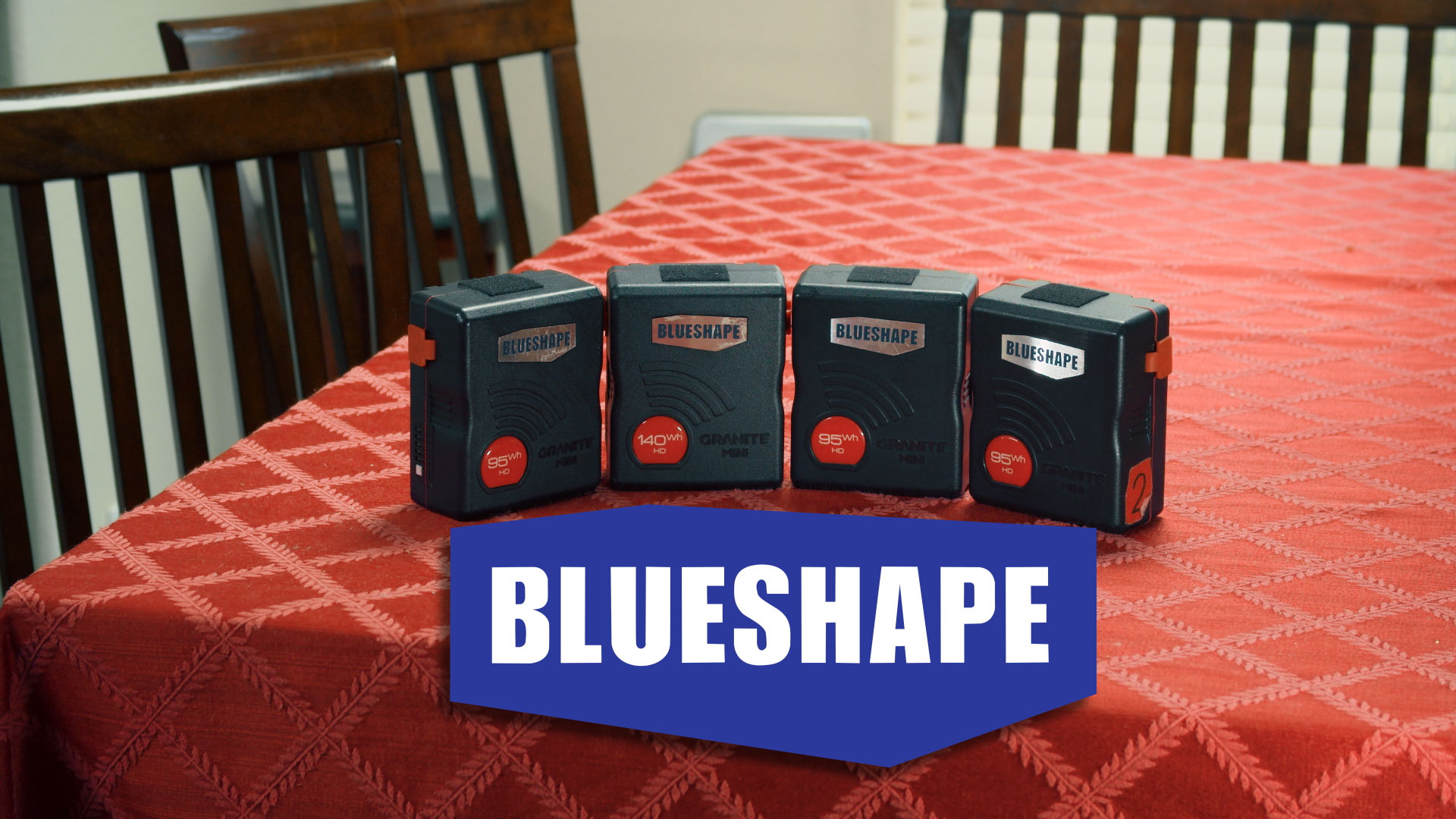 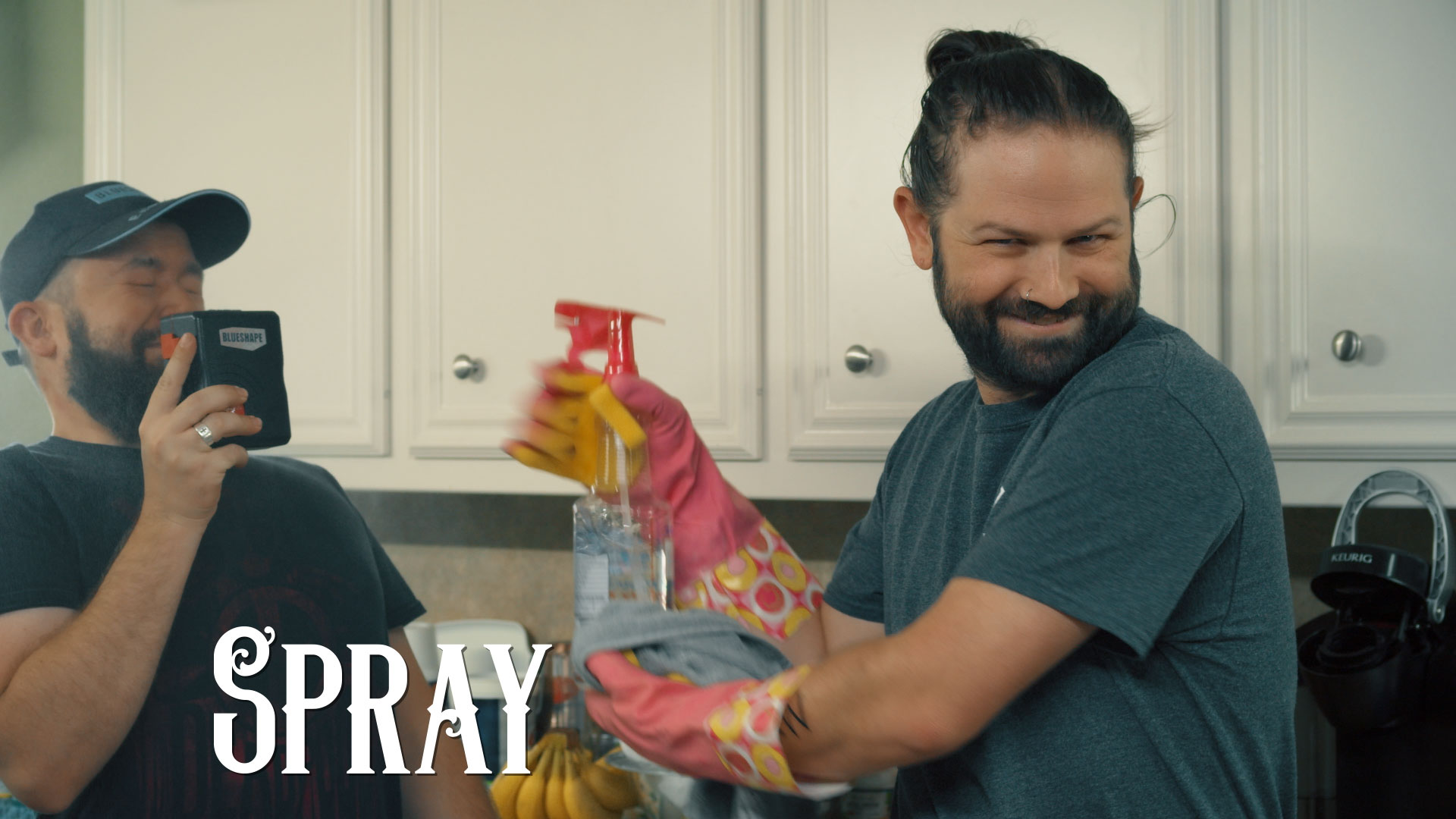 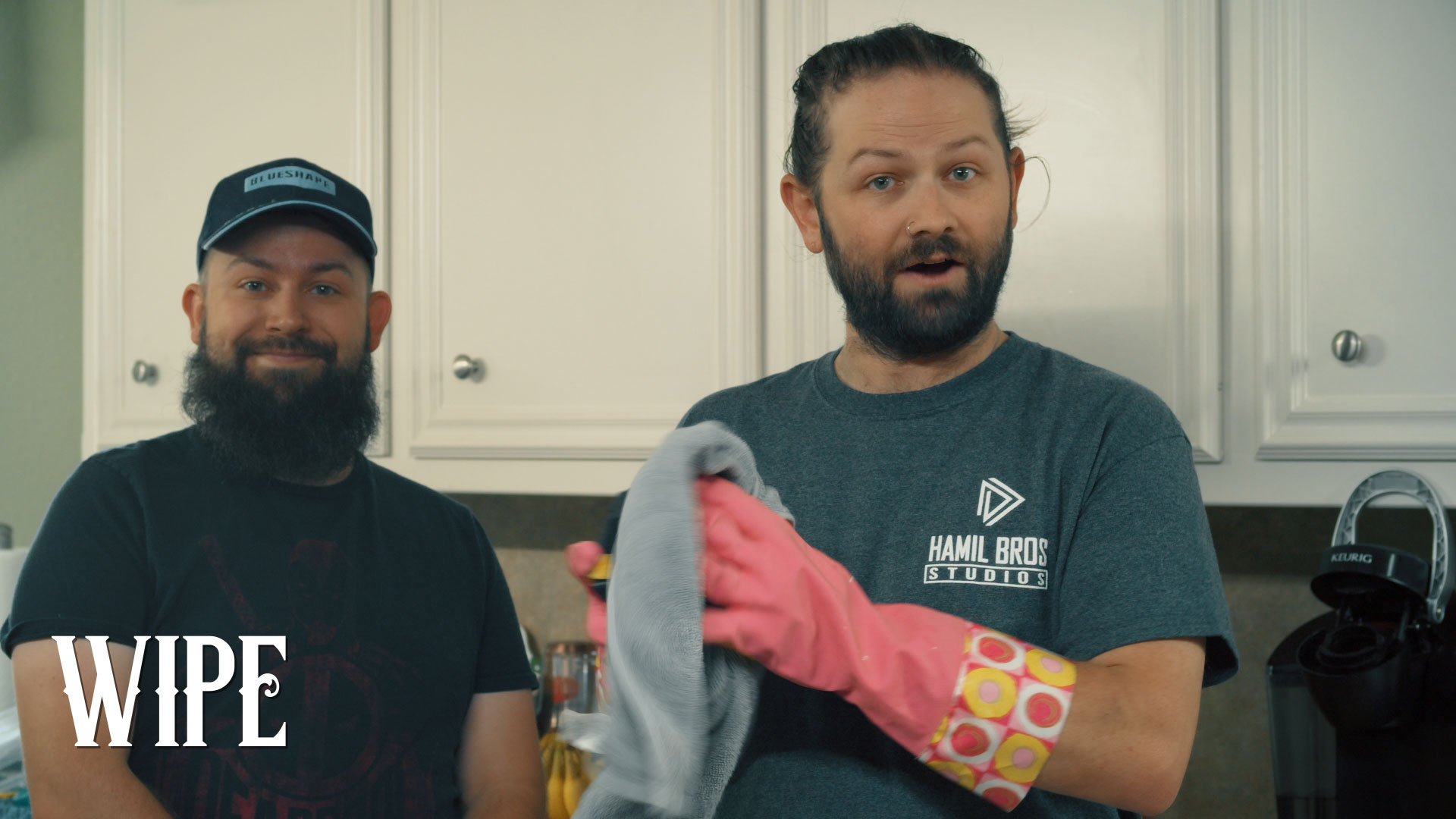 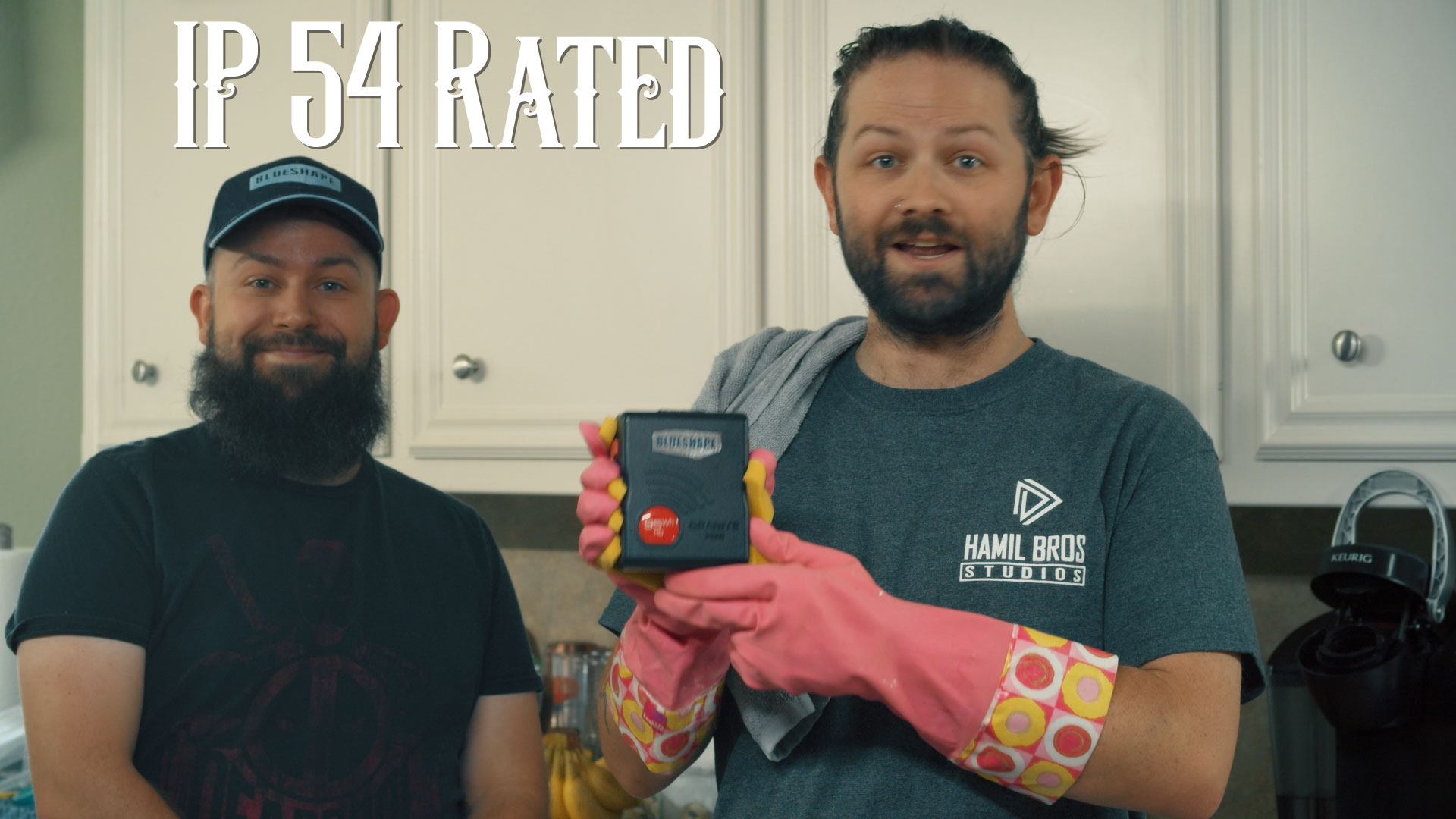 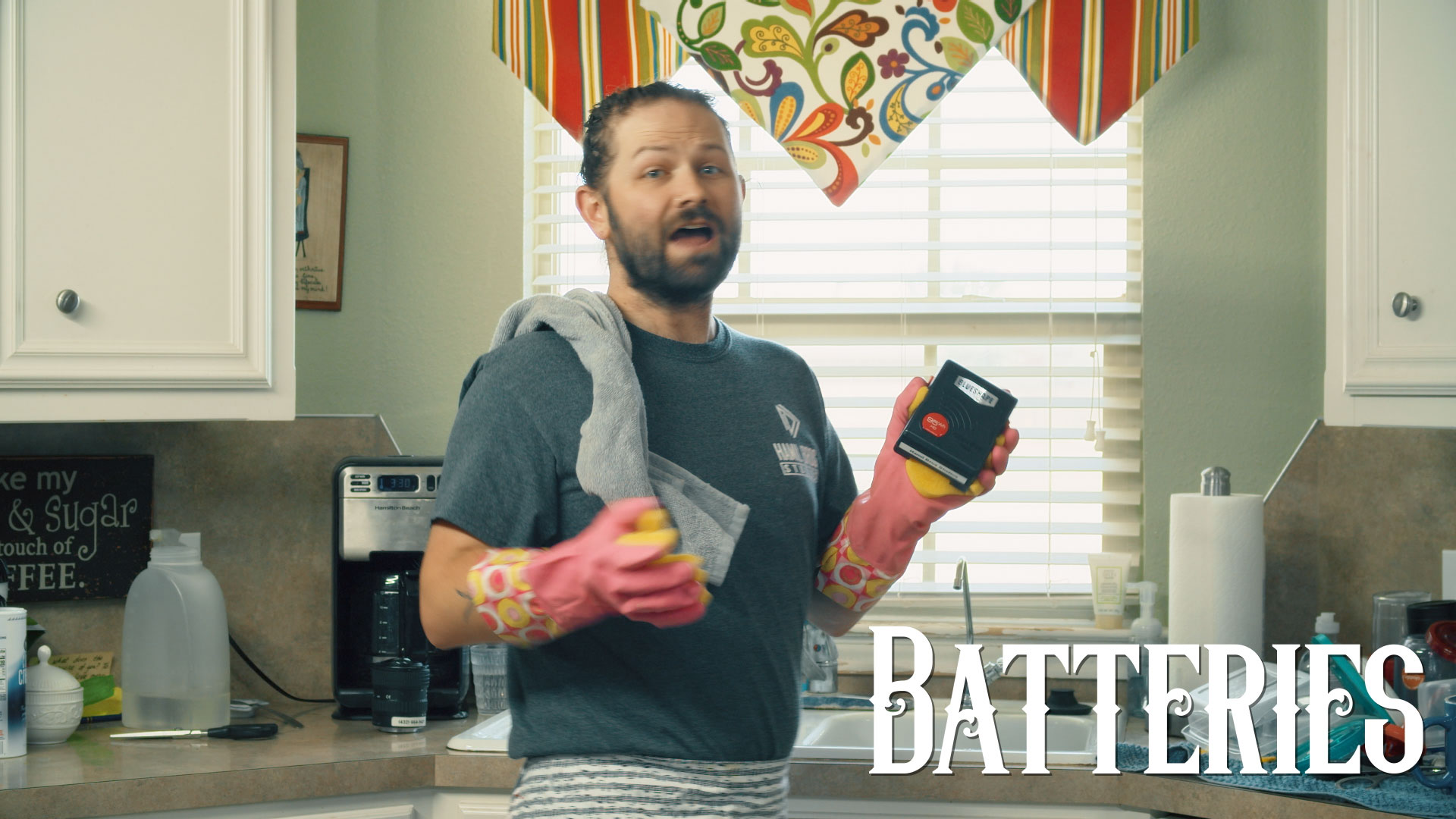 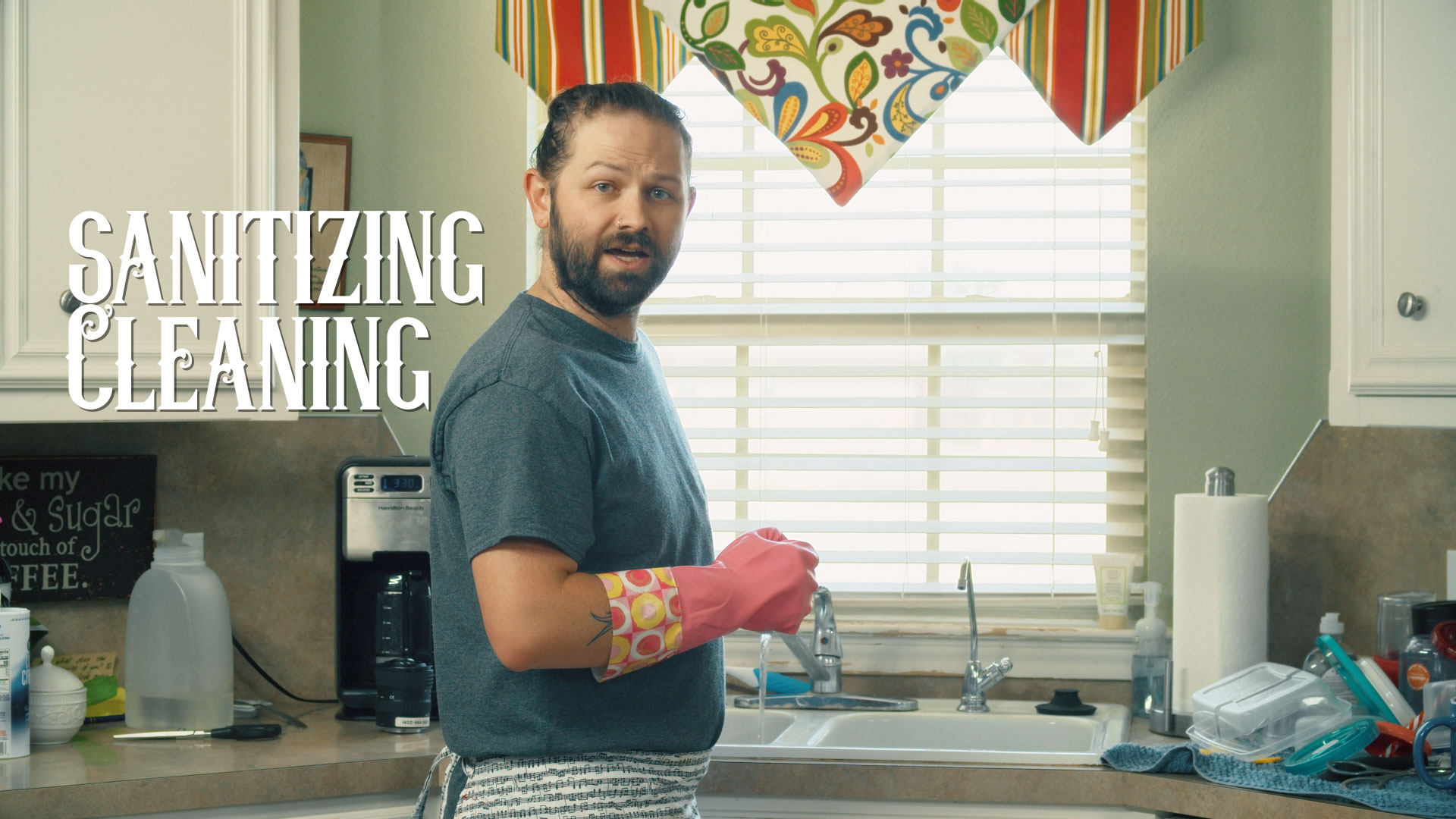 That pretty much wraps up the blog and we hope you enjoyed it. We would definitely love your feedback if you’re in the business. If you’re not in the business, but know you need to give your business the extra push, give us a call and we’d love to talk with you! You can also email us at [email protected]