Well we have been so busy we couldn’t see straight the last several weeks! First off, we had an incredible experience at Shane Hurlbut, ASC (Facebook and Twitter) ‘s Illumination Experience Tour (Facebook and Twitter) in Dallas September 20th and 21st. We came back to Lubbock and had a day before we flew off to Seattle, Washington for the Adobe After Effects 2nd Annual World Conference.

We left Lubbock Wednesday, September 24th, and flew through Dallas, Albuquerque, and on to Seattle. We had all of Thursday to go and do what we wanted before After Effects World, so we had the Hotel shuttle drop us off at the nearby Bellevue and Lincoln Squares. We actually stayed in Bellevue (which is like a suburb of Seattle), so we did not actually stay in “Seattle”. One of the hotel staff took us over there and dropped us off mid-afternoon and the sun was shining making for a really beautiful day. The mall there IS INCREDIBLE. We just walked around and met people in neat stores and they were really nice to give us really great info on what sites to go see and how to get to them, giving us a plan before and after After Effects World  That evening we went and saw most of Maze Runner, but had to leave before it was over so we didn’t have to take a cab back to hotel instead of the free shuttle. So we still don’t know what the ending is…

Anyways, Friday was the beginning of After Effects World. It was a TON OF OVERWHELMING INFORMATION that was really great to soak up, but our brain sponges were already full from the previous weekend workshop in Dallas. The morning started off with a great keynote from Steve Forde (Twitter). Steve touched on a few things we’re not allowed to talk about. Needless to say, they were all very, very exciting updates on Adobe After Effects that will be released in the next several months. We had to sign an NDA or Non-Disclosure Agreement saying that we are not allowed to tell what we heard at After Effects World. What we can say is that these advancements are MOST DEFINITELY going to help us give our clientele better end products. The rest of the day was pretty interesting. It was a bit more laid back where we got to listen to the developers of Adobe After Effects talk about new and upcoming features as well as discuss things that the general public might like to see. After the discussion groups ended, we got to go the After Effects World Expo and Happy hour where we were able to meet some vendors such as Pond5, Maxon, Borris FX, etc.  Thus ended day one of Adobe After Effects World.

Saturday or day 2 of After Effects World was pretty awesome. We broke up into different sessions for the time slots and we pretty much got to choose where we wanted to go for each slot depending on what interested us. So we went to some great sessions.

Our favorite session of day 2 of After Effects World was presented by the guy responsible for all of the inside glowing graphics of Iron Man’s helmet for Iron Man 3 and The Avengers, Jayse Hansen. He created a lot of the display screens in the Helicarrier in the avengers. He’s also done display screen work for Mocking Jay 1 & 2, Ender’s Game, Disney’s Big Hero 6, Rise of the Planet of the Apes, and Need for Speed. He’s an incredible brain and opened up our minds to some incredible ideas on how to improve our productions. He also let us take photos with him!! 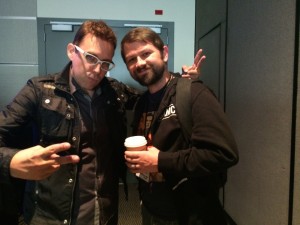 Also on Saturday we figured out that Bungie (The creative video game studio that created Halo for the Xbox) was a block away from our convention center. So we got to go up there and the security guard let us in to take some pictures (in the slideshow below). TOTAL NERD MOMENT. Never did I ever think I’d ever get to stand in there. So that was cool.

The Keynote speaker for day 2 of After Effects World was Video Copilot‘s very own Andrew Kramer!  He’s done visual effects work in the new Star Trek and Star Trek: Into Darkness with Chris Pine, Mission Impossible: Ghost Protocol, and Super 8. When Andrew isn’t co-piloting, he works for JJ Abrams at Bad Robot! He also designs a lot of software that we use on a daily basis. So we were totally nerding out when he spoke and his keynote speech was one of the most heart touching/ incredible speeches I’ve ever had the pleasure to sit through. You can watch it here. We strongly suggest you watch it! 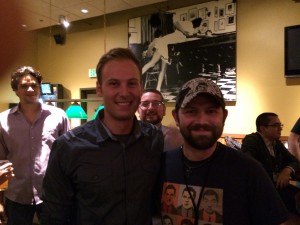 Sunday or day 3 of After Effects World was a nice wrap up to the conference. Wrapping up the whole weekend was a great keynote from Jayse Hansen, whom we mentioned above.

Monday was our last day in Seattle to do what we wanted! We went up to the space needle and rode it up and got to see Seattle from 560 ft in the air. It was really beautiful! Then we got to go visit the EMP museum. It was like a Jimmie Hendrix/ Nirvana Museum, but also had a Sci Fi Film, Fantasy Film, and Horror film museum as well. WE LOVED the film museums. They were all incredible!  All in all we really loved going to After Effects World in Seattle and look forward to going again next year!

Well that’s quite the blog! As always, we appreciate your support! Don’t forget to follow us on Twitter and Facebook for smaller updates. We will also post a video of our adventures once we get the time to put it all together!

In the meantime, enjoy all the photos we took in Seattle! There are a quite a few!