This blog is a continuation of the last WunderTRE(k) Locations Blog. Make sure to check it out!

Flasher Alley – Where Just About Anyone Could Potentially Be Stabbed

We also crammed Flasher Alley into our schedule for the first day of the WunderTRE(k) Brandfomercial. It was a little ridiculous, truth be told, but we knew we had to be down there a few hours after dark. That’s when the “Hash-Slinging Flasher” is known to come flashing. Okay… I’m kidding. This was one of the few locations that was nailed down from the beginning and stayed that way. For the most part, this location was perfect, minus the fact that there was no available power and we didn’t have the budget for a generator. That will be discussed more in the lighting blog.

This location is in Downtown Lubbock and actually has some REALLY COOL texture and natural light. It’s next to a parking garage and down two blocks is a building with a really cool up light that changes color on its own. This created some cool texture and vibe to the shot and we laughed as we shot because it felt like Coby was narrating an episode of “To Catch A Predator.” The only real issue we ran into was outside our control. This was  some guy parked with his high beams on for probably 30-45 minutes about two blocks down. This is the part of town where you just accept that as part of life and DO NOT GO ask him to go somewhere else. Safety was our first priority, so we just left him to his own devices. Took him long enough! It was also pretty much freezing on that location so we, minus Coby, were all bundled up. That kid has some sand in his spine because he braved the cold to get the shot. That knocked out the alley and ended our first day of shooting. 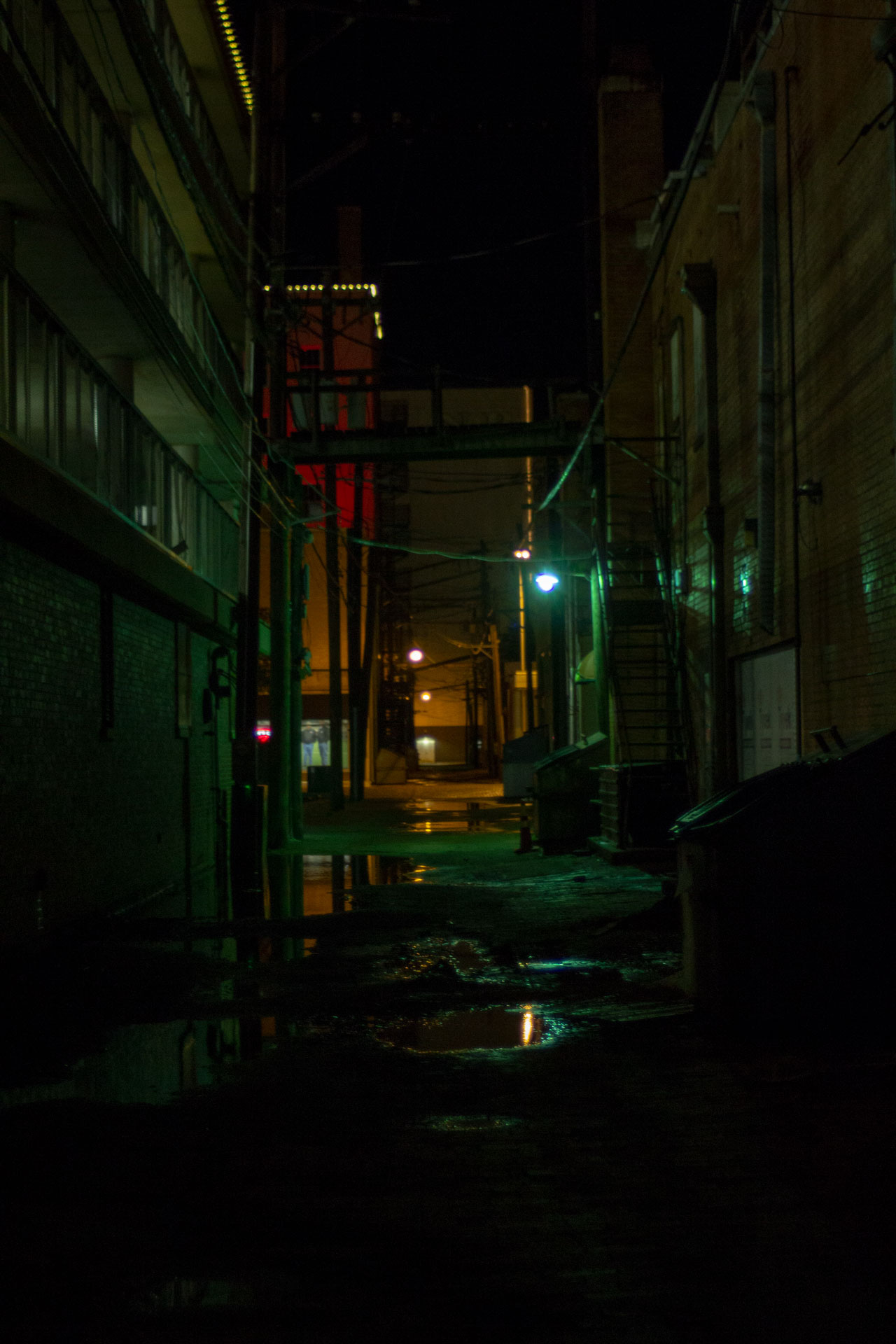 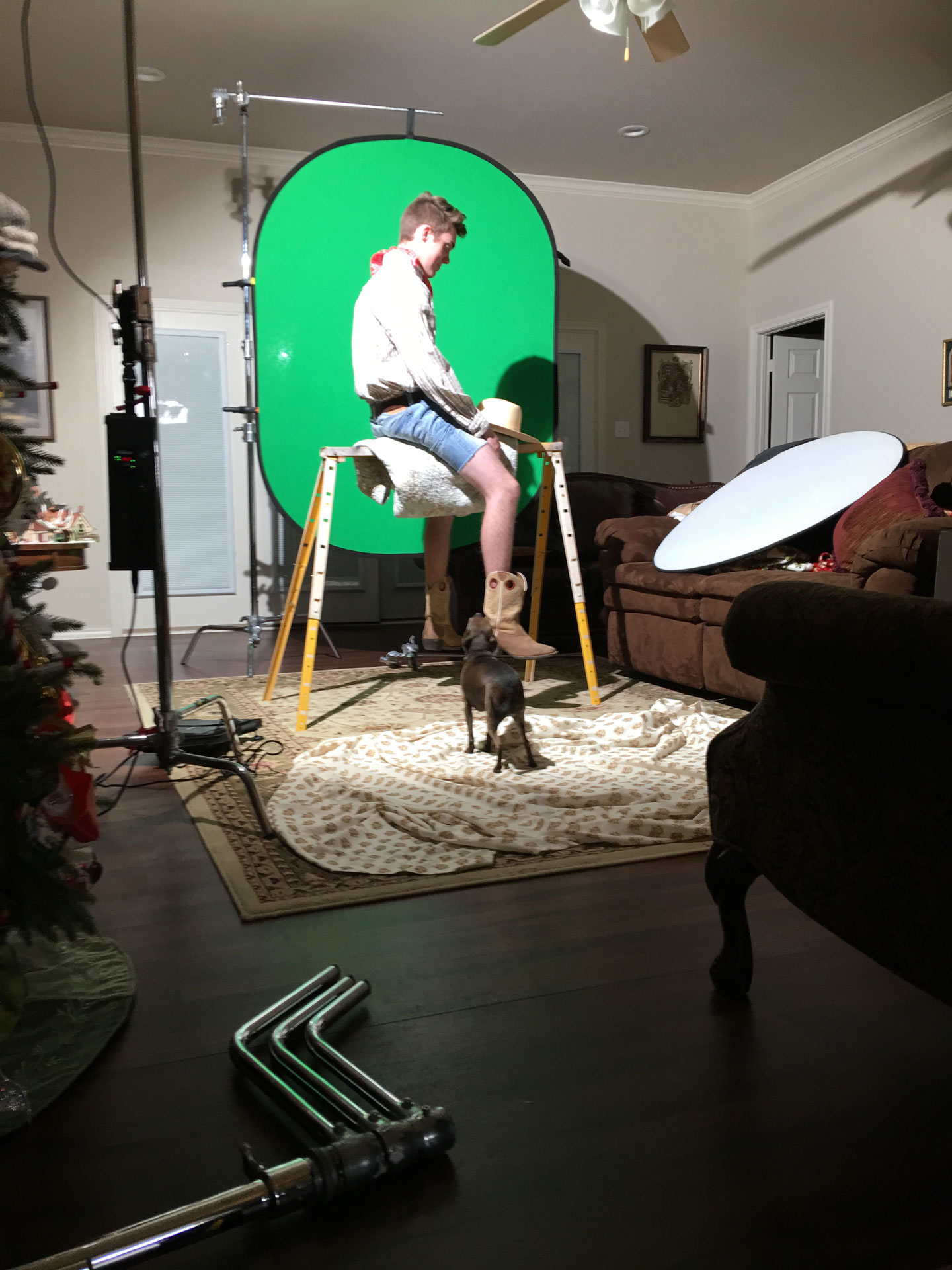 This wasn’t technically a shooting location, although we did have to have it for this still photo. I think it’s pretty obvious we didn’t have the budget to go to Africa, therefore, we had to bring Africa to us. Did we “Bless the Rains” while it was here? Definitely. This location was also part of our parent’s house. Nearly the same set up as the magician’s Theatre but with a different green screen. We found all our composition photos on unsplash.com and that essentially birthed the idea of the ostrich. The script only says “an embarrassing photo of the Englishman pops up,” which meant we had an idea of what could be embarrassing, but didn’t have anything solid. When we found the ostrich, we knew what we had to do. We had Coby sit on a sawhorse with blankets folded and draped over it to provide some comfort. He acted and we captured the rest!

The “Nerdy Work” scene actually had several (I think three) different location ideas before we landed on what you see in the ad. Originally, we wanted Coby lying on his side on a bed in a semi seductive pose, the Natalie to sit up behind him and deliver the line. Some different ideas were thrown out to whether he would be frightened by her sudden appearance and he’d fall off the bed. We decided to alter the location because that didn’t send the right message. From there, we pushed that idea to the fireplace location. Natalie walks around the chair, puts her arms around Coby and delivers the line. It could have worked except for the slight hiccup that Natalie works a full day job and couldn’t be available at the fireplace house during our shooting schedule. It felt like our plans were rapidly falling apart, but one morning during production week, Ross had the brilliant / slightly crazy idea of shooting it in the WundreTRE office. This is a fairly modest office space, something you would find when meeting with young entrepreneurs. It’s not flashy, because flashy isn’t functional or cost effective when you’re a young business. I was definitely skeptical about how we would transform this office into a location that grabs your attention and drives the message.

Ross is a wizard unto himself, though. His vision was the monitor array that you see in the final product. All the monitors and even the Matrix style coding on the monitors was practical. We’ll touch more on the actual Matrix Motion Graphic in the Motion Graphics Blog. We actually used the room where Matt and Ryker produce their YouTube Channel content, since it has virtually no furniture and we had to do little to get the room prepped for the build of the array. The guys at WunderTRE were blown away by how we built the monitor array and how it affected the final outcome of the shot. Lucky for you, you can watch a time lapse of this set build.

That wraps up part 2 of the locations for the WunderTRE(k) Brandfomercial. If you’re enjoying these blogs make sure to head over to our instagram and facebook page, and give us a “follow” and a “like”! If you’d like a recap of what’s going on with Hamil Bros Studios every so often, make sure and sign up for our  “Key Frames” Newsletter below!

These blogs are wildly entertaining right? In today's age, we want our entertainment delivered to us in the sanctity of our couch. So, sign up, and for a limited time, you CAN READ THIS BLOG ANYWHERE! Just kidding, you can read it anywhere anyway. Sign up for the email. Okay Bye!