Over the last several months, we have been very busy here at Hamil Bros Studios. A very good friend of our’s, Mark Edward Lewis, gave us a call that would turn our world upside down.

Earlier this year, we met Mark through the Mzed Sound Advice Tour stop that we attended in Houston. If you’d like more info about that tour, we have another blog post in which we did an in depth video review. During that day with Mark, he told everyone in the class, “If you want to volunteer, just jump up out of your chair and come on up.” So, naturally, we volunteered for EVERY. SINGLE. THING. 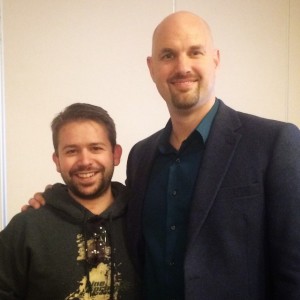 Back in September 2015, Mark messaged us through Facebook asking if we’d like to be part of a project on which he was working, Star Trek New Voyages/ Phase 2: The Holiest Thing (IMDB Page), starring Brian Gross, Brandon Stacy, Jeff Bond, Charles Root, Jasmine Pierce, Shyaporn Theerakulstit, Jonathan Zungre, Patrick Cawley, and Wayne Johnson. He said he needed some foley recordists and we came to mind. Foley is the reproduction of everyday sound effects that are added to film, video, and other media in post-production to enhance audio quality. These reproduced sounds can be anything from the swishing of clothing and footsteps to squeaky doors and breaking glass.

We had never worked on a collaborative job of this scale, but that didn’t scare us. We told him just that and he responded that he would be glad to walk us through the process, answer our questions (which there were more than plenty), and mentor us along the way. In a flash, we were part of the crew working to produce the episode, “The Holiest Thing.” We decided the best way to approach this project was to ‘Boldly Go’ where no Hamil has gone before.

First on our list was to watch this episode and figure out a plan. Mark got us hooked up with the episode via Google Drive and we got it downloaded and watched the first pass. This edit was a bit overwhelming to watch. At this point, there were still quite a few visual effects missing, so there are a few scenes that still have green screens. Also, the only audio on the project was some of the dialogue from on set and whatever other noise those on set microphones picked up. Besides that, it was barren. This was a really cool experience, because you don’t realize what an intricate part ambiences, music, and foley play in a movie until you’ve watched one that’s missing all those parts.

Mark suggested we capture wild foley first. So we set out to capture probably the most important wild foley there is: Footsteps. We figured the Starship Enterprise had carpeted floors, but we decided to add a little hollowness to the footsteps since it’s in space and would give it a little bit more space-like feel. 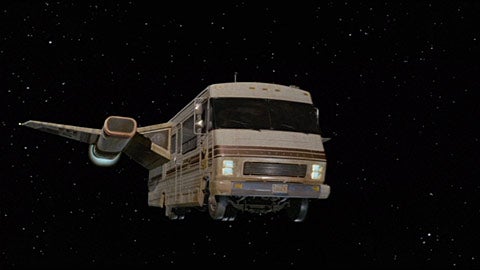 We tried several different attempts at creating a “hollow” footstep foley to no avail. Finally, Ross had the idea to record inside our grandpa’s old motorhome. We found the PERFECT fit. So we had Ross in boots doing footstep foley for the men and we had our AWESOME mother in boots doing footsteps for the women on the Enterprise. We got them recorded and knocked out in an afternoon. 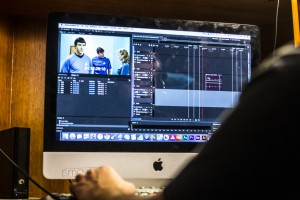 Once back to the studio, we took all that sound into the computer for a process called “Denoising.” Denoising is where you take a sound into this audio manipulation software, select a bit of dead space that may have an unsightly sound such as an air conditioner and through some amazing algorithms, the program can remove that noise without ruining the initial sound you needed. In this case, that would be the footsteps. Once that process is taken care of, it’s time to start placing footsteps in the scenes. This is one of the longest audio processes we’ve ever done! You wouldn’t believe how many people take a step in movies until you’re the one having to match them step for step with footstep foley. 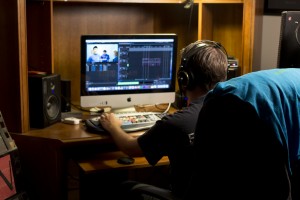 From there, we moved on to more wild foley and like we said this was a MAJOR learning process. What we learned after the footsteps is that it’s easier to act out actions with visual reference than trying to capture wild foley and make it fit the scene. Sounds like a pretty obvious thing, right? Well, sometimes you get so bogged down in a project that the obvious answer is staring you right in the face. We had to take a step back, look at the project, and answer a very hard question. “How do we simplify this process?” Granted, we don’t own a sound stage or have access to one, so we had to go on a more DIY route and figure out how we could rig this to work in one of our homes.

Our best bet was to get me isolated somewhere so he could do the movements of the characters without the additional keyboard sound Ross would be making. We came up with quite the contraption. We ran a stage snake downstairs to provide audio signal between Ross’ office and the basement as a means of communication between Ross and myself, but also as a means of recording the foley taking place down there. Once we had the audio feeding between the rooms, we had to get a video feed there as well. That also took some intuitive thinking. We managed to run SDI cabling from Ross’ office to the basement and then use an SDI-HDMI converter to bring the video signal into Jacob’s TV. This was a great way to do things until we had to return the SDI-HDMI converter we were borrowing back to its owner.

But, that DID NOT stop us! We made it work by adding a TV in Ross’ office as another display off his computer. From there, we set up our Blackmagic Design 4K production camera to push a feed to a monitor in the basement that would essentially become our SDI-HDMI converter. Thus, we brought the visual feed back into Jacob’s TV after that minor set back. Once we really had that system down, we hammered in the work to be done on the foley. There were a LOT of long hours packed into just a few days of free time that we had to work on this project.

We finally got to send off our pass at the foley and awaited the notes. It was a HUGE experience and we can’t thank Mark enough for having us along to go boldly into a project on a scale which we’ve never been. So, without further adieu, here is Star Trek New Voyages/ Phase 2: The Holiest Thing.

[to hear a surround version for headphones, click here]

If you enjoyed what you read here about our Foley endeavors on Star Trek, we hope you enjoy checking out the rest of our website. If you want to keep up to date with what we’ve got going for more of a day to day experience please head over to our Hamil Bros Facebook Page and click the LIKE button and follow our Hamil Bros Twitter. Also head over to Youtube and subscribe to the Hamil Bros Studios Channel!