Carter’s Furniture Behind the Scenes Video

This past week, we had the pleasure of shooting our first commercial client, Carter’s Furniture in Midland, TX.

We basically had two shoots over the span of two days. The first day was a relatively short shoot we caught on the way into Odessa. It consisted of meeting with a good friend of ours, B.D. Berryhill.

B.D. loves classic cars. HE LOVES THEM! It’s neat to get to experience someone’s favorite past time. We got a great shot with his 1955 Chevy Bel Air and he, in return, gets to show his car to more people. His passion for cars is amazing. 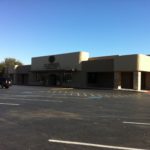 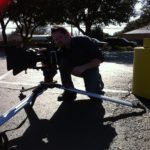 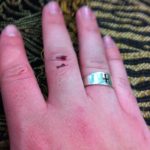 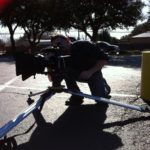 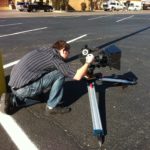 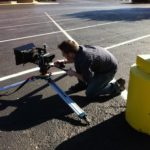 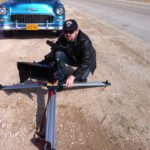 Our second shoot began the next day around 3:45 p.m. We started with catching the front of the Carter’s building and around 3:55 began our load in.

We can’t express our gratitude for how helpful and positive all the carter’s employees were. We were asked on countless occasions if we needed help and told if so, to grab anyone and they would be glad to assist us! We began the shoot with a basic two camera and tripod setups to film our basic still tripod shots and stay out of the way of customers. We finished those up around 5:45.

Next up was filming with our DJI Phantom Quad-copter with a go pro attached to the bottom. We had a few issues at first, but managed to catch some super sweet aerial footage of several sections of the store.

After the Quad-copter, we got out the saw horses and our micro dolly. This little setup really allowed our creative juices to flow just by adding a little bit of movement. It also allowed us to get some beautiful moving content in tighter spaces that wouldn’t allow our big dolly.

Then came the biggest piece of our arsenal, our 5′ crane so affectionately called “Ichabod.” This beauty gave us some great upward movement we couldn’t achieve otherwise. The setup is quite a bit larger since it incorporates our big dolly, so we had to have wider spaces to execute these movements. Though we love the end result, it can be a pain to move. But, we were in a furniture store! What do they have in furniture stores? Furniture dollies! With some much needed help, we could lift the entire setup off the ground and push a furniture dolly under it, saving us a ton of time and allowing us to move more freely about the store.

Greg, the general manager, and Echo, the floor display designer, were so incredibly helpful. They were ahead of the game by removing display price tags and rearranging furniture according to each shot we needed. Without them we could have easily taken probably 3-4 hours longer to shoot. Thanks so much!

After Ichabod, we broke the rig down to just the big dolly and tripod to get a few shots we couldn’t cover with the micro dolly.

It was an intense shoot and an intense day, but the great folks at Carter’s made it so great. We can’t express our appreciation for everything they did for us on the shoot and for allowing us to capture their store. We look forward to our next encounter.

We also appreciate all of you who keep up with us and especially those of you who read this short novel of a blog post. Don’t forget to follow us on twitter and on facebook. Hope you enjoy!