It’s been a nutty two weeks for us here at Hamil Bros preparing and delivering the LCU Musical Heritage film.

A few weeks ago, Sheila Dye, Director of Alumni relations at LCU, contacted us to put a film encompassing the musical heritage of LCU together. The musical heritage film was to be the opening video for
The Vocal Majority performance on LCU campus November 8th. The day after Sheila called us, we sat down to have a meeting with her to see in which direction they would like the film to go. Sheila gave us a bunch of incredible information along with more than 10 yearbooks spanning from 1957-present day. We were very excited about the job, but a little stressed with our time frame being only two weeks until delivery.

Our first shoot for interviews was to take place a few days later when we went to the Midland/Odessa area to film for another client. We figured why not have an interview shoot while we’re down there? It was a little hard pressed to find people to interview in such a short time span. Luckily our Dad, Lonnie Hamil of Spring Creek Ministries, had a great story really showing the true color of LCU’s musical heritage. Along with a lot of laughs, we got the story on camera and it was the first piece of the puzzle of the musical heritage film.

Two days later, I headed to Lubbock to bring gear for our second set of interviews for the musical heritage film. We were lucky enough to have one of our interns, Massiel, on hand to help us for this particular shoot. We owe a great deal to her extreme helpfulness! Thank you Massiel! It was great getting to interview these great people about their experience of LCU’s musical heritage. Samantha, Megan, and Izzy all had wonderful things to say about music at LCU and they really helped set the tone for the film.

Now we were on a search for music. How can you have a musical heritage film without music? The answer is that you can’t. Our search for music was a bit of a difficult process. Then lightning struck Ross in the brain. He proposed we talk to Dr. Philip Camp, Director of the LCU Praise Choir and Chamber Singers, to see if we could do a recording of a slightly different arrangement of “The Lord Bless You and Keep You.” Dr. Camp graciously agreed to help us out! We headed to LCU the following monday and set up to record the Praise Choir singing this incredible piece. After setting up we ran to the beginning of chapel to catch a little bit of footage of singing for the musical heritage film. Once chapel was over, the choir students began to fill the recital hall. It was great seeing so many familiar faces and getting hugs from the kids. We recorded our special arrangement of “The Lord Bless You and Keep You” and were on our way!

It was very difficult to figure out how to encompass over 50 years of incredible musical heritage into just 3 minutes of a video. Well… we actually fit it in 4 1/2 minutes. Either way, the task was a bit daunting. We finally figured out we were looking at the film in too narrow a scope. We broadened our view and the script rolled off Ross’ tongue with me sitting at the computer writing every word he said. Once we got a script down, we headed over to our Grandparent’s house and I recorded the Voice Over for the musical heritage film. I was pretty excited, this being the first professional VO I’ve ever done for us.

Once we made it back to the office, we worked at putting the VO with the music we had recorded and found that it the Praise Choir music really fit for the introduction of the film, but not for the entire film. So, Ross and I both went on the hunt for music. Several hours later, we found the perfect match for the tone of the musical heritage film, actually being two separate songs.

Now we had the foundation of the film, it was now time to turn our attention towards the yearbooks and general editing of the musical heritage film. I scanned a lot of pictures from a LOT of yearbooks, but our eyes were opened to some really cool facts having to deal very personally with our own upbringing. Upon looking into the 1959 yearbook in detail, we discovered our grandfather, Jack Rigney, was a instructor of photography for the 1958-1959 year at Lubbock Christian College. 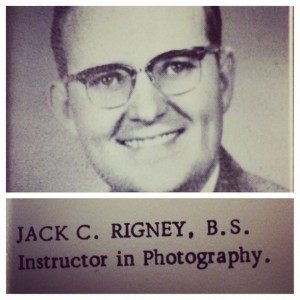 Our grandpa, Jack Rigney, in the 1959 LCC yearbook.

I scanned away at lots of photos as Ross built some incredible After Effects compositions to really bring this musical heritage film to life. Several days before the Vocal Majority Event, we met with Sheila and a handful of other faculty and staff from LCU to let them view/ give revisions on the first draft of the film. Later that morning we met with President Tim Perrin to get his feedback on the film. After our meetings, we headed back to the office to do some simple revisions.

Once the revisions were complete, we wanted to color correct the musical heritage film for projection. So we went back to our grandparent’s home and color corrected on their projector. That, in itself, was a really neat experience.

On Saturday, November 8th, we were able to finally show our LCU Musical Heritage Film to a crowd of around 650 attendees. It was very well received! 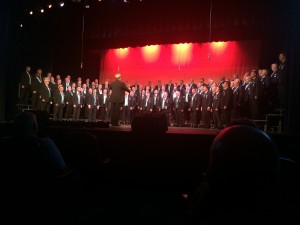 Photo of The Vocal Majority performance!

Our sponsorship slide at the Vocal Majority Event.

As always, we really appreciate the support we receive from our clients, friends, and family. You can keep up to date with more of our day to day activities by following us on either Facebook or on our Twitter!