This may be the video project post I’ve been most excited to do for this entire year. 2021 was a HUGE year for Ross and myself! We did a fair amount of video shoots and productions throughout the year, but the BIG accomplishment on our plate is that we recorded and produced our first album for our band, LABOR XII. The album was released on November 12th and has been doing very well since its release. So why am I talking about that on our production company website? There has been a TON of video production involved in the creation of this record as well as in the promotion of it. Here’s the first teaser for the release of the album, shot at our Album Release Concert.

When we originally started working on this album, we made the decision that in order to make it the best it could be, we would need to do a crowdfunding campaign to support the actual production of the album. Those funds would pay for the gear we needed to record ourselves, pay our amazing producer, Evan Rodaniche, to mix the album, and for the Physical CDs to be produced. Thus, we kicked off our video production journey with LABOR XII.

We had to kick off the campaign with a video introducing us and talking about our plan for the album funding and production. We knew if we were going to be successful, we would need to be as transparent as possible with our supporters. We, ourselves, have donated to plenty of kickstarters or crowdfunding campaigns that felt like they kept us in the dark. I ultimately regretted being involved because we never knew what was happening with them. That was a major pain point we recognized and knew we had to do everything we could to prevent our supporters from feeling that way. So we kicked off with the campaign video, being honest with our goals as well as making sure the perks for each backer level were explained.

After we launched our campaign we had to get into the studio and get to work. That was a ridiculous amount of work! Along with the crowdfunding video, we decided to produce a mini-documentary series to show just what in the heck goes on when you record a CD. We chose to shoot interviews and accompanying B Roll every day we recorded any tracks for the CD. We produced 44 mini-docs ranging from 1.5 minutes to 7 or 8 minutes per doc. It was one way we could actively update our backers on the progress of the album, plus it generated a large amount of video content for our youtube channel. If you have some time and want to dive down the LABOR XII rabbit hole, check out this playlist.

These turned out to be MASSIVELY beneficial to our band and really did its work helping us raise the funds we needed to get this album finished. The work, however, did not slow down there. There was a massive amount of creative work that had to happen to make sure the album came out as professionally as we wanted. Once the funding was under way, along with crushing the mini-doc videos that were released sometimes up to 3 times a week, we had to design all the album artwork and packaging. This was no small task as we wanted the album to look and present like you could walk into a record store and pull it off the shelf. This took many painstaking hours in Adobe illustrator for me. Mostly, because I work primarily in video and am still a total illustrator NOOB.

Designing the Lyric Booklet was my single favorite part of the entire design process. I’ve always had an affinity for good lyric booklets inside CD cases. For you younguns out there, that’s how we learned the lyrics for a song before the internet. The first piece of that puzzle had to be the album cover. Designing the album cover was a big collaborative effort between Ross and me. I found the original snowy forest image and then he took it and composited our ghostly Cerberus guarding the trunk full of monsters into the image. We could check the album cover off our list.

After that, the ideas started to flow. The design of each page was inspired by the lyrics or one of the songs featured on that page. Originally, the booklet was to only have 8 pages including the front and back cover, but as the campaign progressed, we were able to add 4 additional pages, to what is now the MONSTERS booklet. 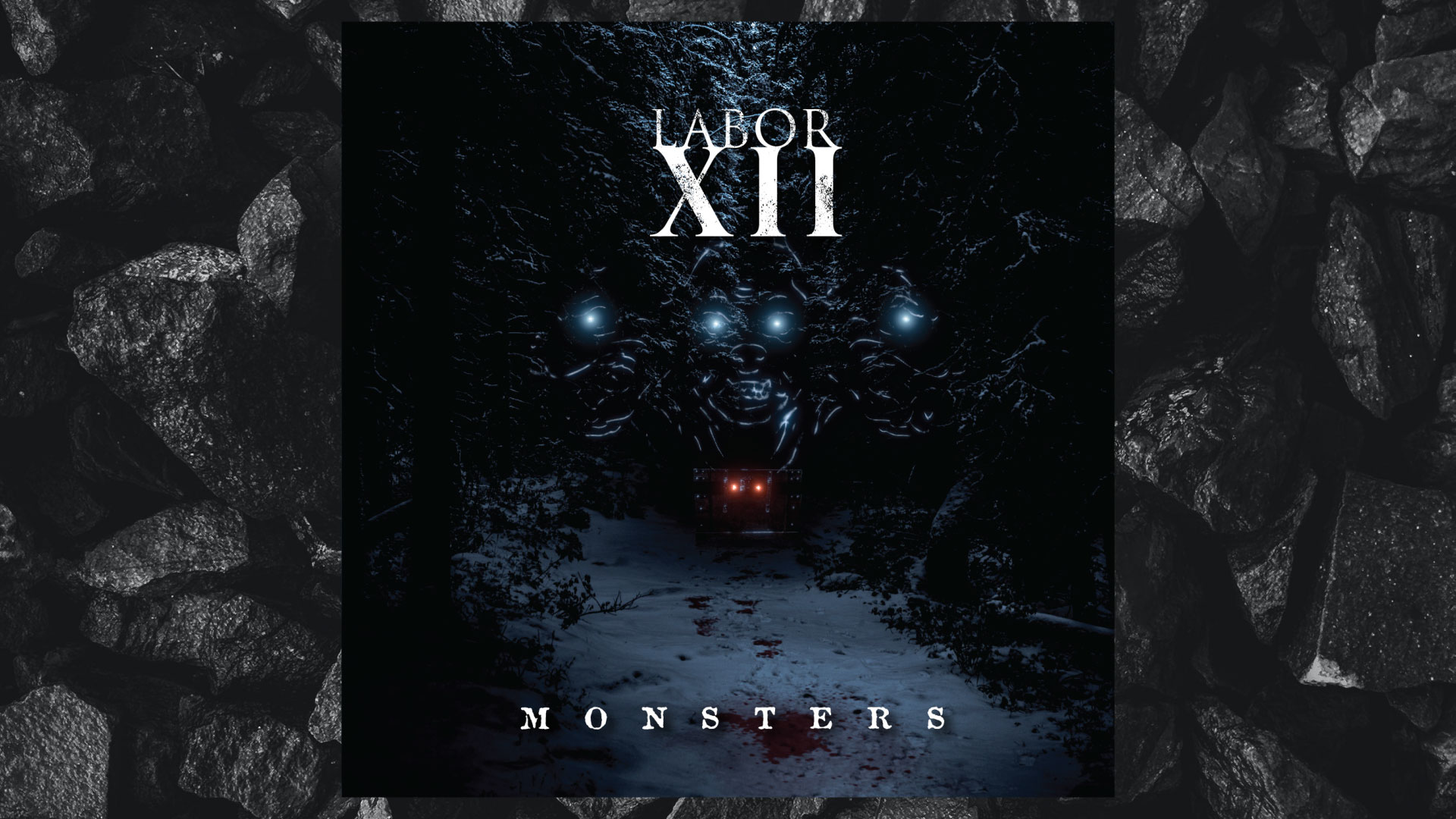 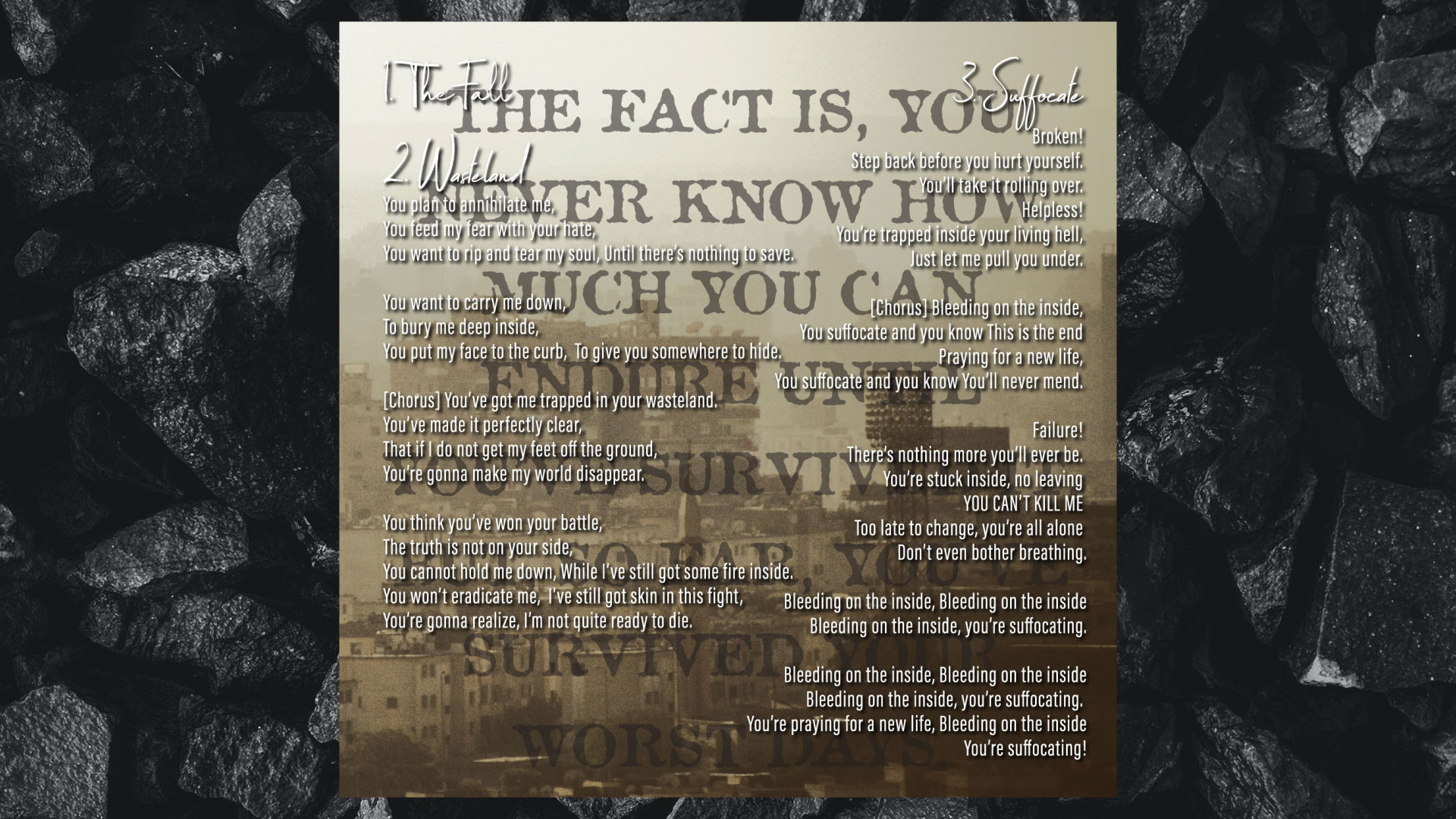 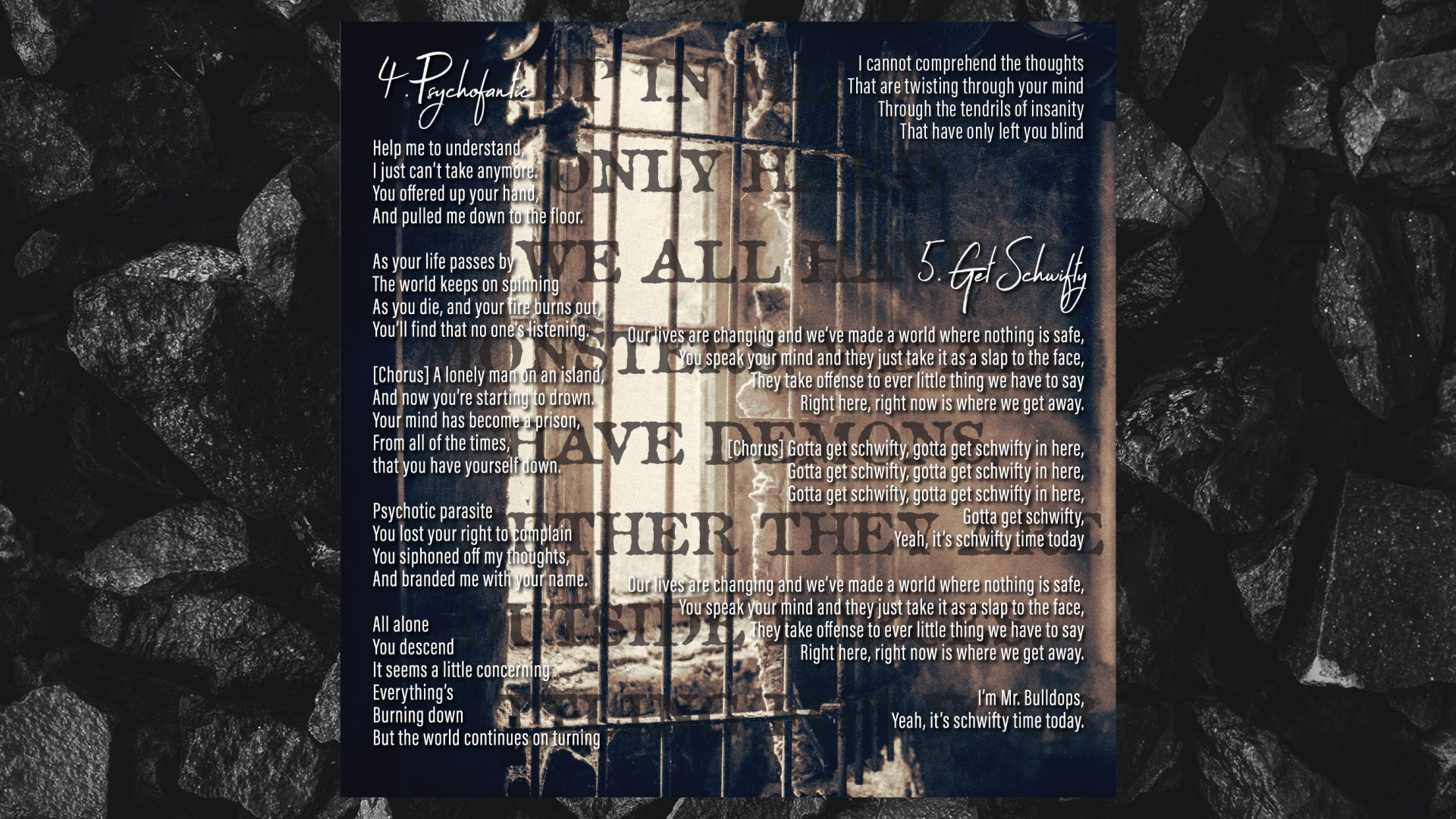 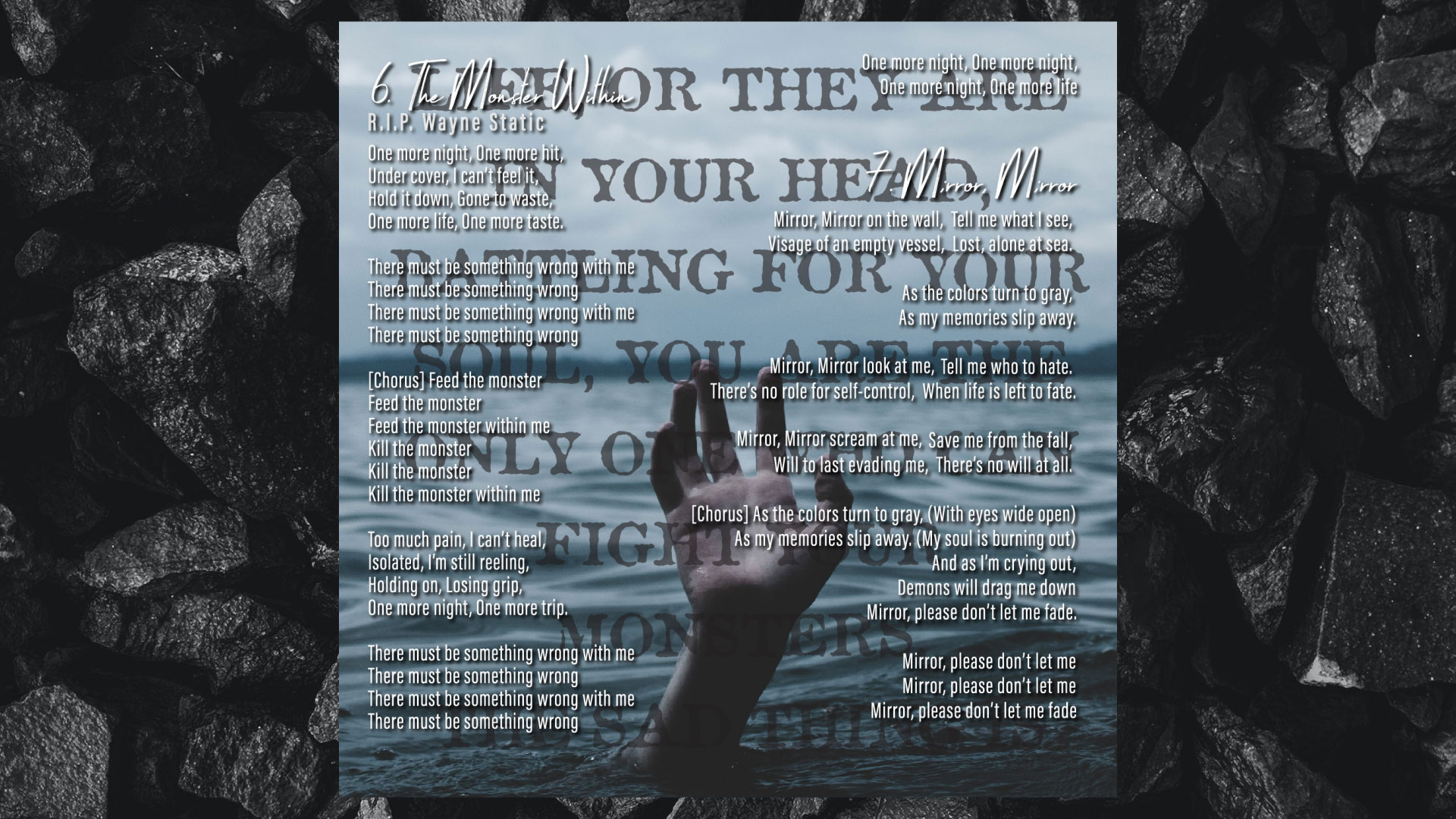 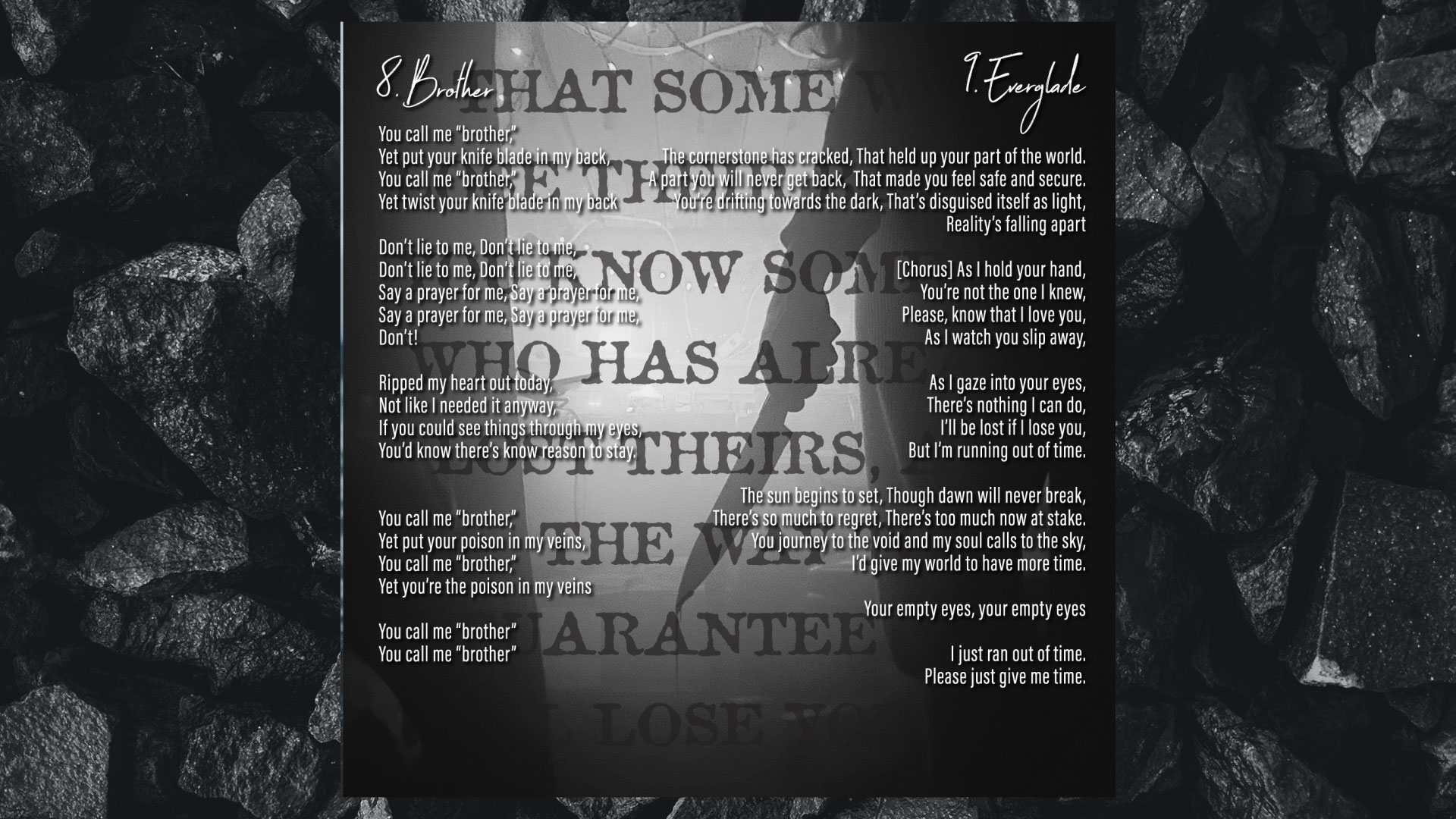 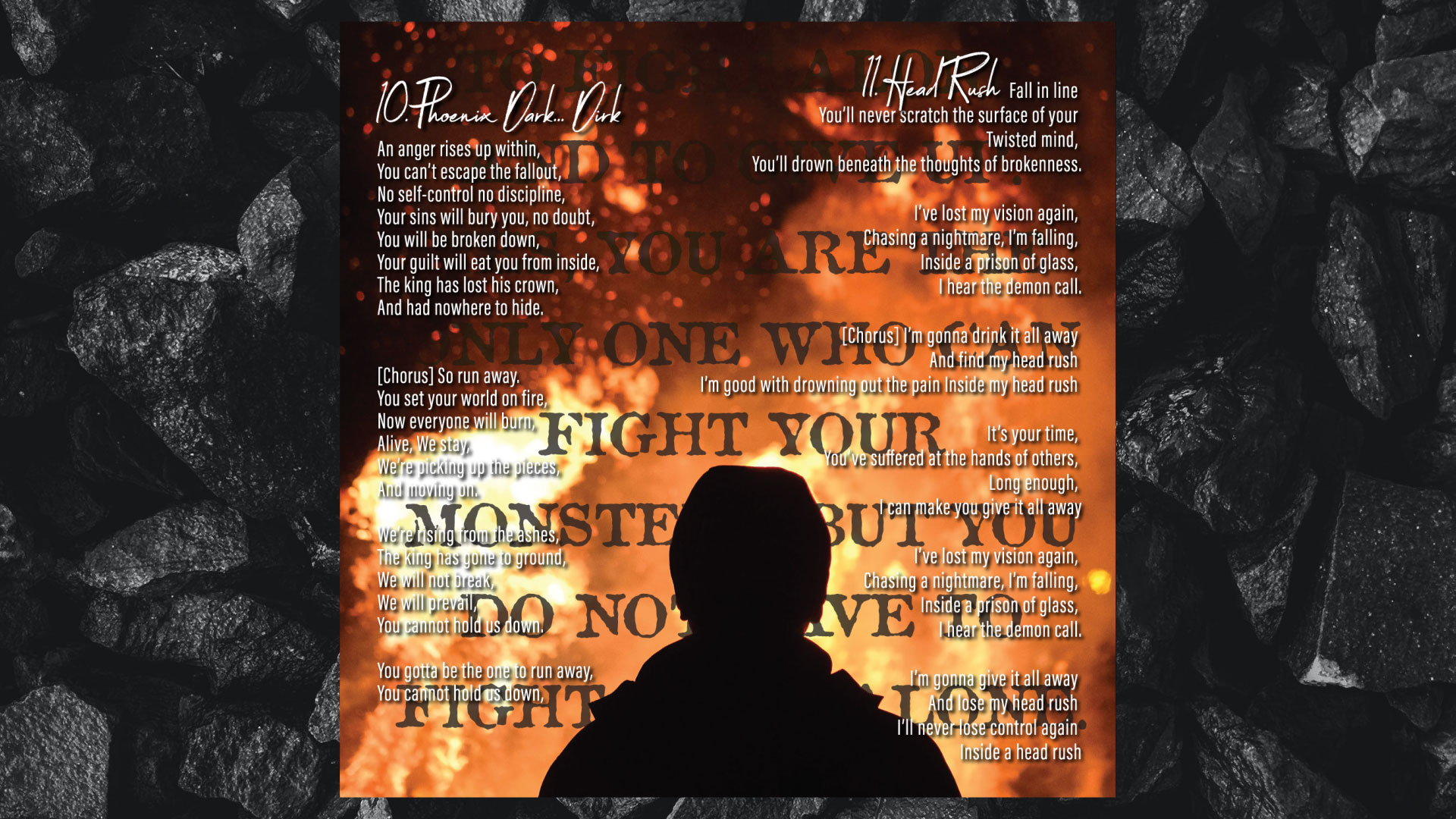 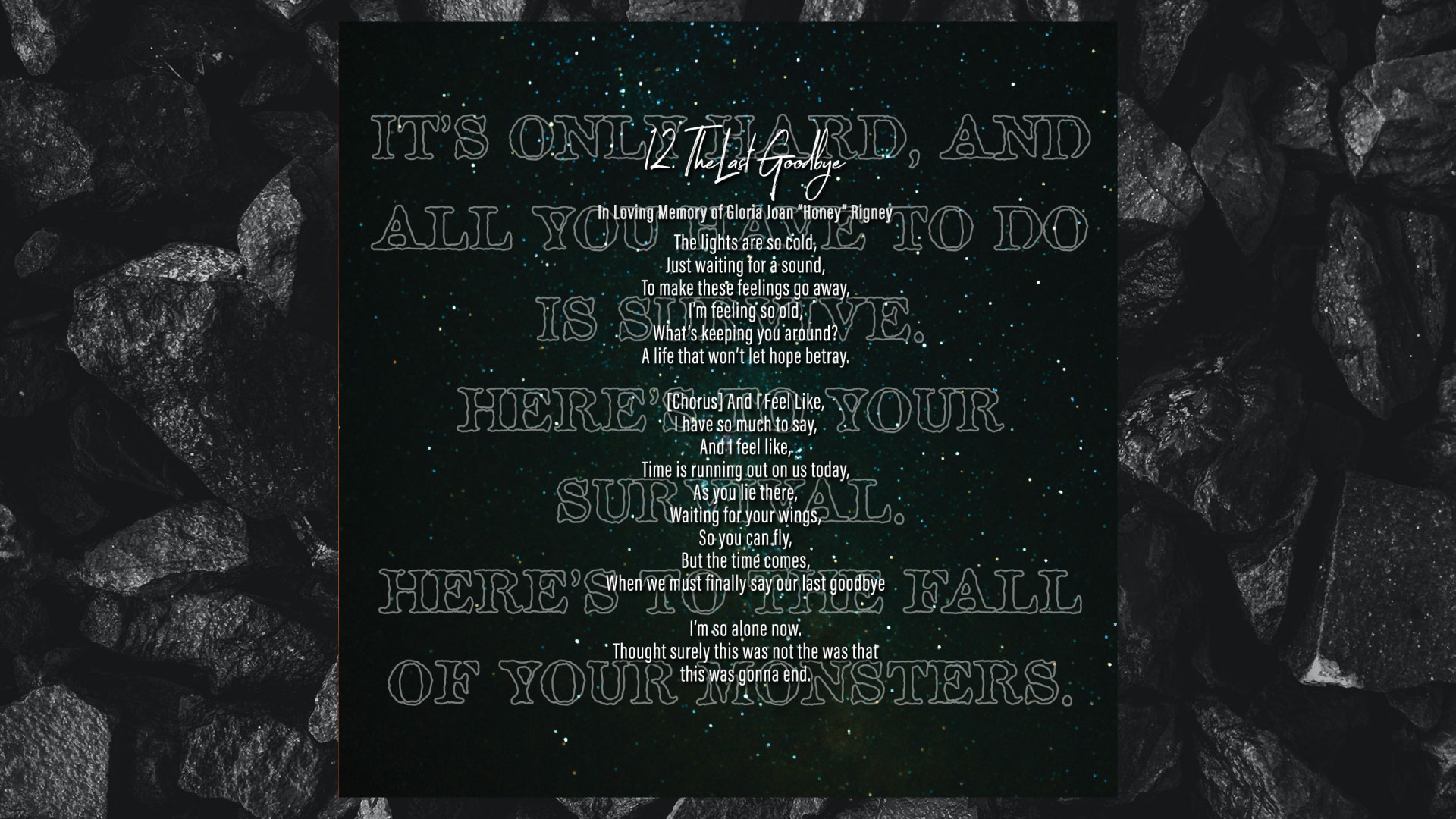 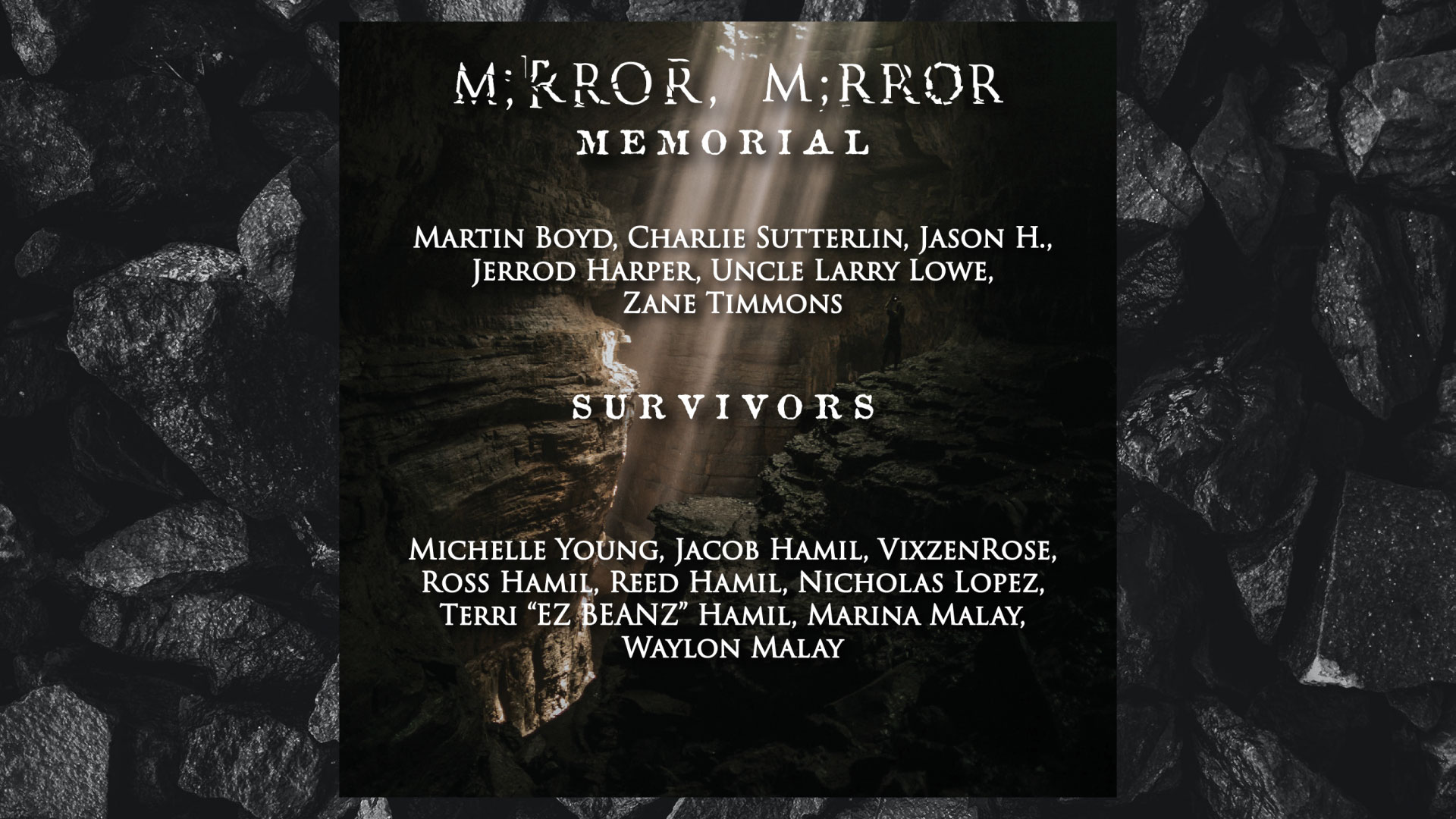 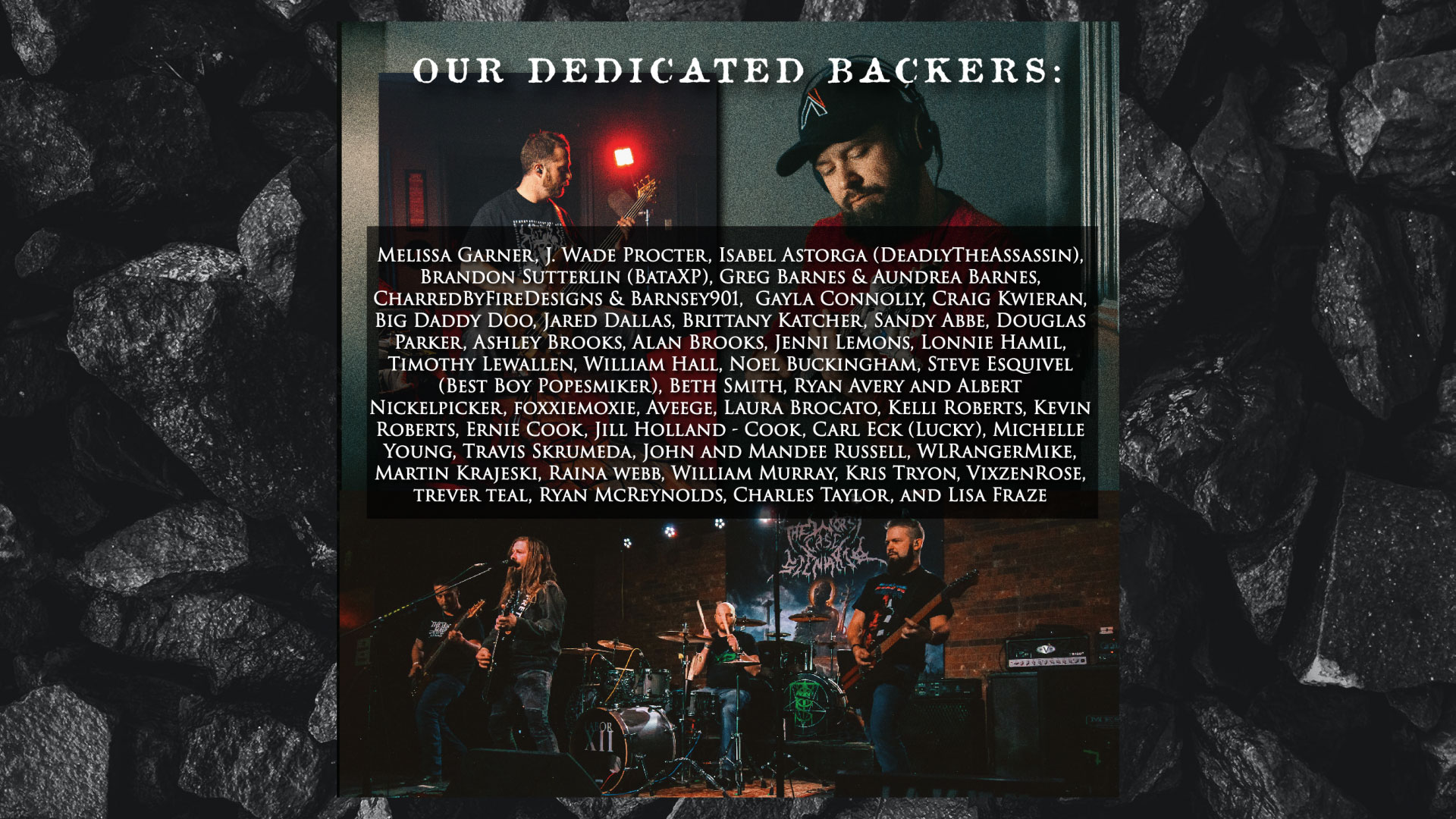 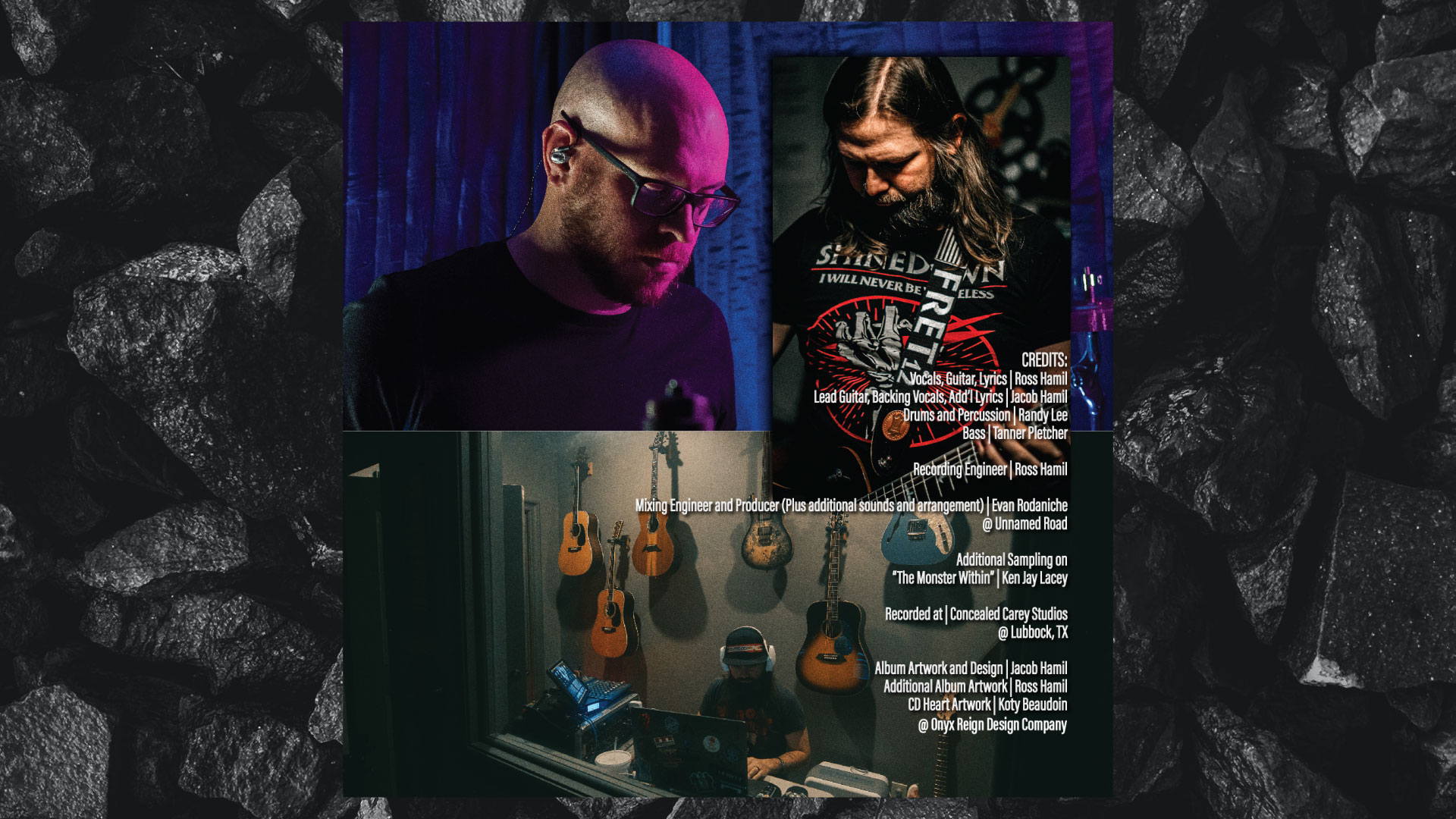 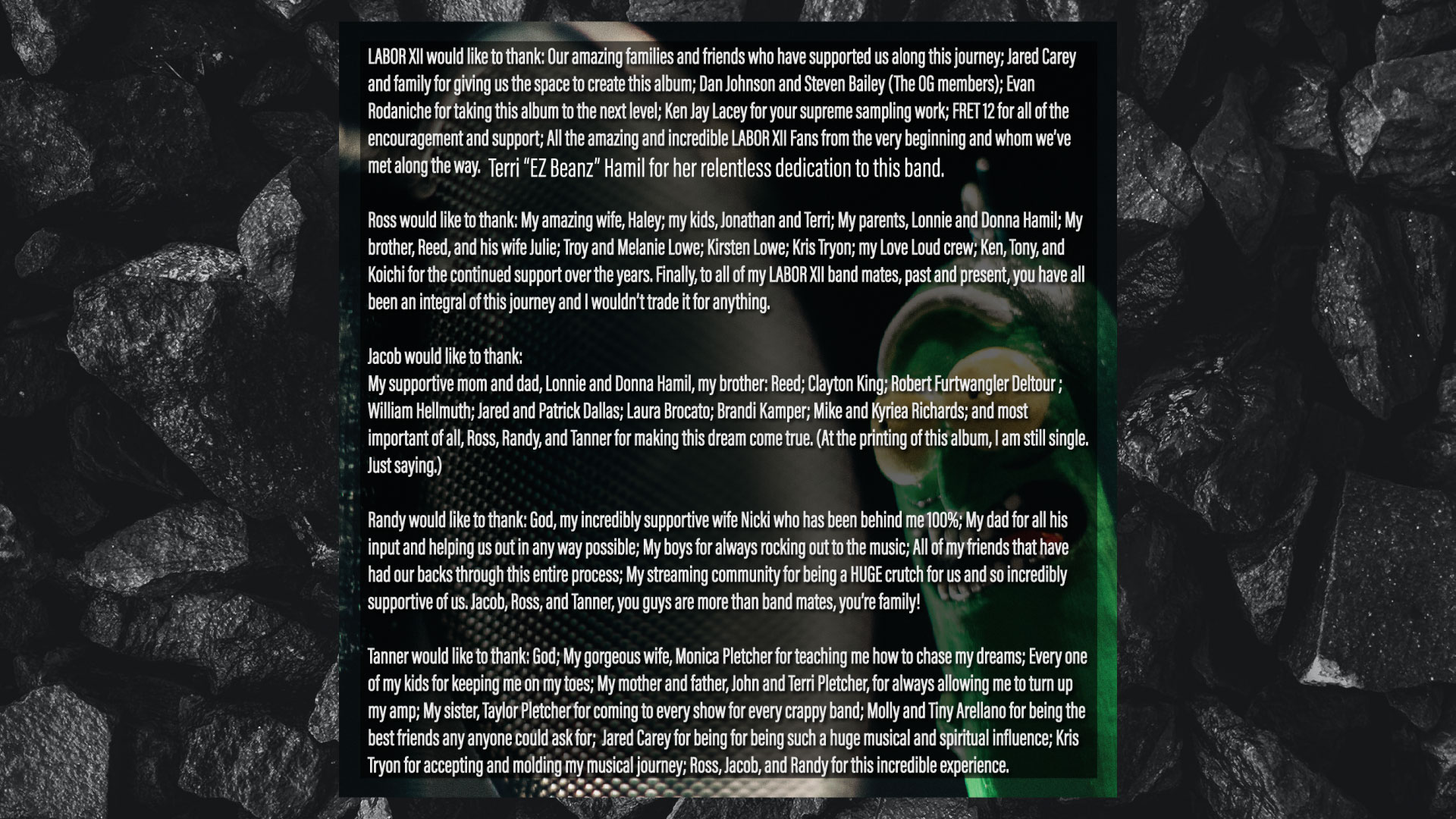 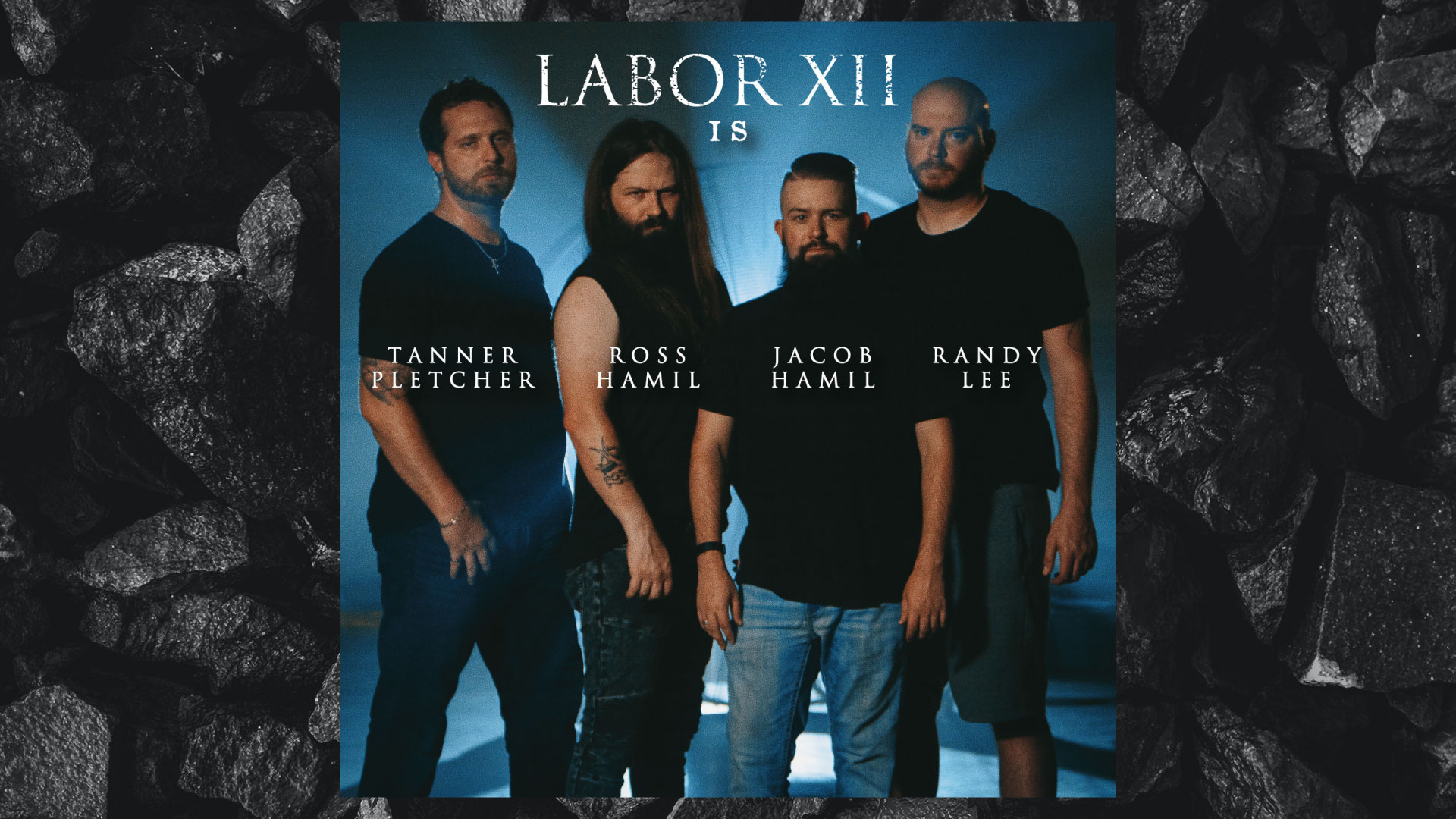 Closer to the end of the campaign and the end of recording the record, we started receiving mixes back from our amazing producer, Evan Rodaniche (Unnamed Road Studios). At that point we had to make the decision on our first single. After a lot of deliberation, we chose the song, “Suffocate” to be the first album mix (not including the suffocate demo or Mirror, Mirror Live Acoustic videos) the public should hear. With a big release like that, we had to have a music video to accompany the launch of the single.

In the midst of EVERYTHING ELSE the album was requiring of us, as well as other productions and our jobs, we managed to bang out this music video in about 2 days. Massive thanks to Sniper Dent Company for letting us shoot in their garage. The music video was everything you want out of a hard rock music video: lots of headbanging, light shafts, and sweat. Oh boy, did we sweat. We had it edited in no time, because we were so excited, and before long we had it scheduled to release on LABOR DAY 2021. Clever, huh?

On November 12, 2021 we released our first full length rock and roll album, MONSTERS. It’s still quite surreal that it’s even here, but with the massive response of positivity we’ve received, we can’t wait to see where it goes!

I can say with full confidence that this album would not be successful as it already is without video production. We maximized the effectiveness of video production and marketing to create and then continue the success of the album. Video helped us raise the funds we needed to do the album right and with the responses we’ve received from friends, family, and complete strangers, we did MONSTERS right.

With that authority, we can say video is worth it. Long form, storytelling projects are worth it, they will help your business flourish and thrive. If you’re interested in LABOR XII and would like to check us out, you can find us anywhere music can be streamed. You can also find us on Facebook, Instagram, Twitter, and Youtube. If you want info emailed to you, you can head over to our LABOR XII website and sign up for our email list. We won’t spam you, we just want to keep you informed. If you’re looking to invest in upgrading your business’s video content, give us a shout! We’d love to talk options with you!

In the meantime, you can listen to a playlist of the entire album through this playlist.