Several months ago, our good friend, Cassie Johnston of Alstrom Angels, gave us a call and asked if we could meet about sponsoring and producing an ad for Giving Tuesday LBK.

Giving Tuesday is a nationwide initiative to get the public to give to their favorite local charity. Basically, it goes Thanksgiving, Black Friday, Small Business Saturday, Cyber Monday, and Giving Tuesday.

Cassie contacted us to produce an ad to push the Giving Tuesday initiative locally here in Lubbock and we were glad to do so! We sat down with Cassie and started formulating a plan. Most of which was already taken care of, because Cassie is the bee’s knees when it comes to organizing. She had a GREAT script in hand and that saved us a lot of time in pre-production.

Next, we had to fit into the schedules of our local celebrities, Hall of Fame Texas Tech Women’s Basketball Coach, Marsha Sharp, Texas Tech Head Football Coach, Kliff Kingsbury, Lubbock Mayor, Glen Robertson, and Rick Dykes of the Reagor Dykes Auto Group. Again, Cassie did what she does best and was the go-between us and the celebrities, so we could focus on the ad instead of focusing on scheduling these different people with their incredibly busy lives.

Our first shoot was with Marsha Sharp at the Legacy Event Center. The scene was beautiful and we had a blast lighting it. We were a bit nervous shooting with someone so high profile, but Marsha turned out to be an absolute joy with whom to work. She thanked us over and over for having her be a part of this production and all we could do was thank her for making us all look good, ha! Marsha was fantastic on camera and set the tone for an amazing Giving Tuesday Lubbock video production. 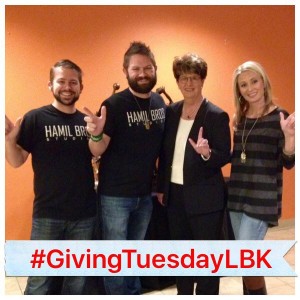 Marsha Sharp Putting her “Guns” up with the Hamil Bros and Cassie Johnston from Giving Tuesday.

Next, we made our way to City Hall to shoot with Mayor Glen Robertson. Mayor Robertson was, no surprise, up to par on delivery and took all of a couple of minutes to shoot this ad. He came in, read the lines, and delivered them like a champ. That was a more interesting lighting set up, because we had to turn a bland conference room into an interesting scene. It turned out well and we are very happy with the final product. 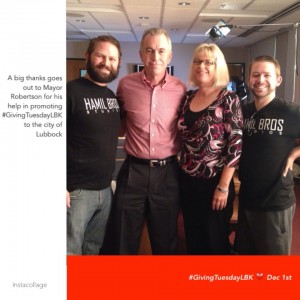 The Hamil Bros with Mayor Glen Robertson on the Giving Tuesday Shoot.

We had a bit of a break and that time provided us our Giving Tuesday #UnSelfie shoots with locals from around Lubbock. Our first location was the Buddy Holly Center downtown. The wind was wretched, as it is this time of year in Lubbock. So, we had to opt for shooting inside the Buddy Holly center. This time of year they have a “Dia de los Muertos” exhibit in the art gallery. So, that was the colorful backdrop to our first set of primarily children holding their #Unselfie signs. We must say, these kids were ADORABLE. A fantastic and CUTE addition to our Giving Tuesday LBK shoot!

The day after, we traveled down the Lubbock Garden and Arts Center where we shot in the Arboretum. This location turned out to be a FANTASTIC exterior location with a gorgeous, fall colored backdrop. Ross has a knack for finding beautiful back drops in exterior locations. We had more adults show up to this Giving Tuesday #UnSelfie shoot and it turned out amazingly. The lighting was perfect and manageable (which is a real blessing when you’re at the mercy of the elements). This particular shoot filled out the rest of the #UnSelfie people and finished a significant portion of the video production.

After the shooting #Unselfie people at the Garden and Arts Center, it was time to shoot with Texas Tech University Head Football Coach, Kliff Kingsbury at the Football Training Facility.

We were able to shoot in the helmet room. This room contains a helmet from each NFL team that has had a Texas Tech player in it’s roster. 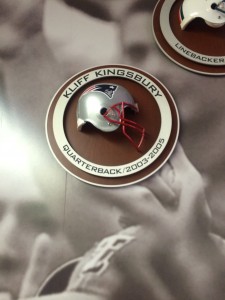 It was a really cool room, but didn’t quite serve our purposes for this ad. However, the assistant at the front desk. Taylor, was more than happy to arrange for some of the awesome manikins dawning full on football gear to be placed in the helmet room at our disposal. That made the shoot way more interesting and lighting the manikins was a fun obstacle to tackle. Kliff was great on camera and he was so kind. Truly, it was a fantastic experience working with someone on that level. Jacob was pretty excited to be Kliff’s body double for lighting! 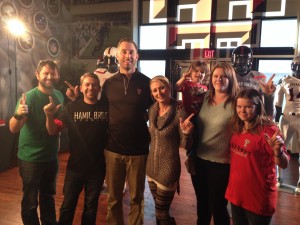 Kliff Kingsbury with the Hamil Bros, Cassie Johnston and Haley, Terri, and Jonathan Hamil on the Giving Tuesday Shoot. 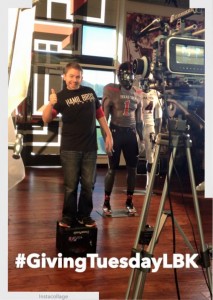 Kliff’s assistant, Kirstie, made cue cards for Kliff to read and it was AWESOME! She was such a huge help and it made things go even smoother than we thought possible. It turned out to be an awesome shoot. Kliff filmed for all of a few minutes and then was gracious enough to sign a lot of Tech paraphernalia for us. 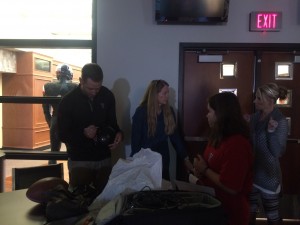 At the same shoot, we were able to have Rick Dykes deliver his lines. Rick was very polite and very appreciative of what we do. We had to change the scene up a little and decided to pull the manikins out of the shot. It actually turned out really well, because the daylight flooding through the Texas Tech symbol on the back wall gave us more of a cyan tint to the whole scene. Something that wasn’t in Kliff’s shot near as much. 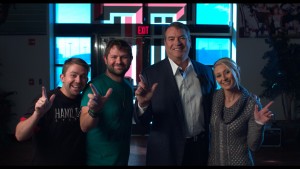 Rick Dykes with The Hamil Bros and Cassie Johnston on the Giving Tuesday Shoot.