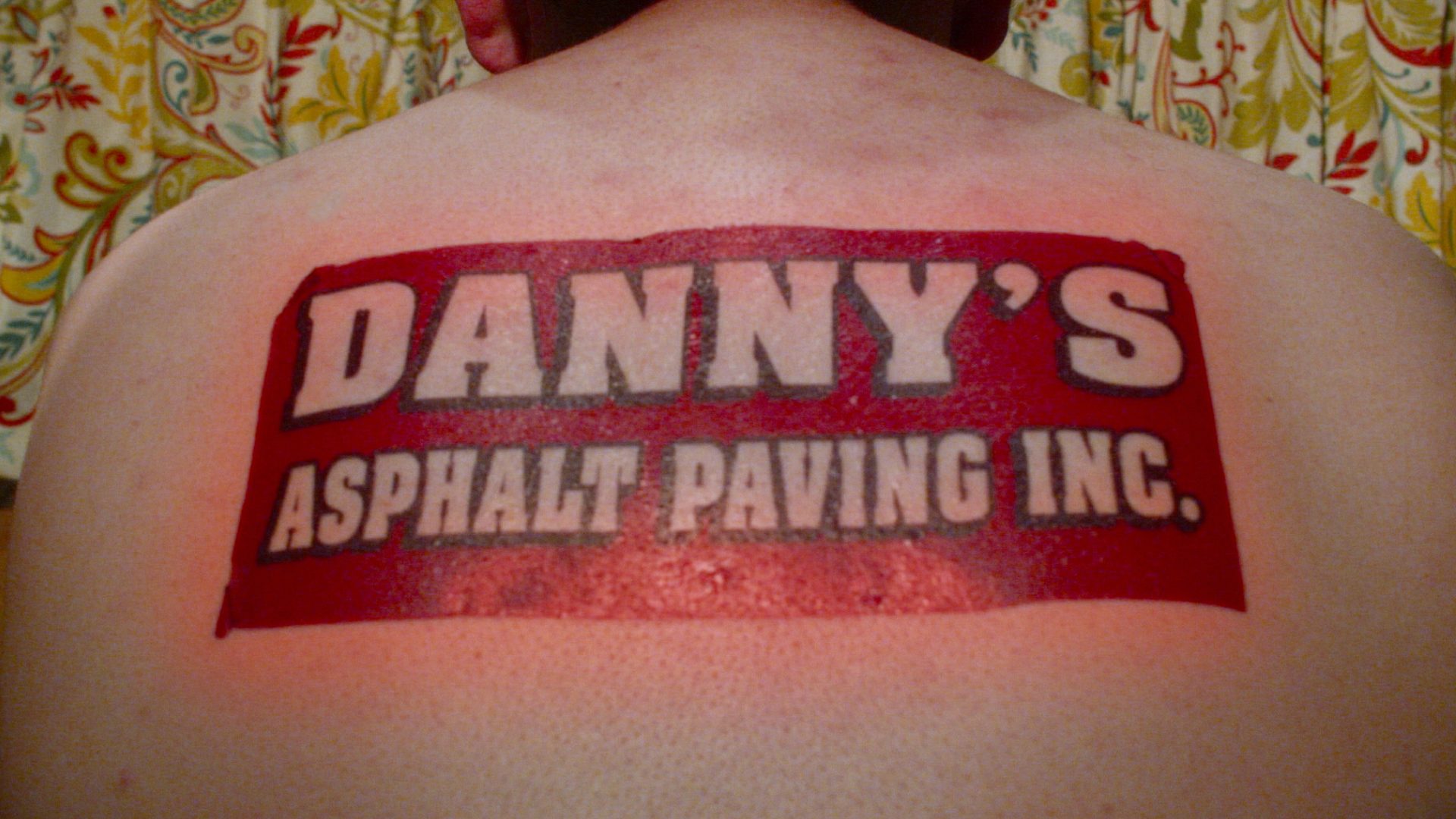 We’ve been cooking up a lot of work throughout the summer and we’re finally in the production phase of several projects! We had a meeting with Danny Carroll, Owner of Danny’s Asphalt Paving Inc., back in August to start talking about commercial ideas. After a few weeks of back and forth, we managed to land on our first idea!

The idea was simple enough. “We love our branding so much we put it on… everything.” So we decided that beauty shots of their branding would be the way to kick off the ad. We had several different rigs we pulled together for shooting the glamour footage of Danny’s Trucks, Dump Trucks, and branded gear. One of our favorite bits of camera support has been the Dana Dolly we bought from our good friend and cinematographer, David C. Weldon, jr. It’s a smooth dolly and we just cannot get enough of it. Along with that is our Freefly Systems MoVI M5. Another great bit of gear!

Planning the Concept on Location

Our original idea had been to shoot the ending scene in a tattoo shop local to the Permian Basin. As we were shooting around Danny’s, Danny showed us a little trailer he had purchased a while back which got our wheels turning. What if our tattoo receiver has to travel out to a weird trailer in the middle of nowhere for this Danny’s tattoo? And the more we thought about it, the more enticing the idea became. After some deliberation, we figured out our best course of action for shooting this ending scene. We wanted to pull off a a rather large, wide establishing shot to show just where this tattoo was taking place.

We had Les Gaddis of Gaddis Visuals on set as our Assistant Camera and he did a splendid job. It was his idea to do our wide establishing shot of the Trailer and our two trucks. We also needed to find the right talent for the job. THIS IS A JOB FOR RUSTY EUBANK! But seriously, Rusty is a giant, bald teddy bear with a beard and a few tattoos. But, make Rusty mad, REALLY mad, and he’s no longer a teddy bear. So we gave him a call to see if he’d be interested and he told us “Of Course!” Our next course of action was to find someone willing to not wear a shirt on TV where they could be recognized. Since Jacob has been in ads before, he gladly opted to “receive the tattoo. The tattoo was a custom printable tattoo we ordered online and we think it turned out spectacularly!

ON TO THE SHOOT!

We, first, wanted to shoot the trailer interior to maximize time with Rusty. So we got our hideous simulated mirror ball set and figured out what practical light we were going to use inside the trailer. Then we brought in a 1K tungsten fixture with the famous wax paper diffusion and dimmed it to our liking. This was a terribly enclosed space and we wouldn’t use the term “Petite” to describe Rusty. So we had to have a camera rig small enough to squeeze in the trailer with Rusty, Jacob, Les, and the lights. So we turned to the Black Magic Design Micro Cinema Camera. IT IS THE BOMB! Once we wrapped our interior shot, we could let Rusty leave the location.

From there, we moved to the WIDE SHOT. Something we were really excited about! Lighting a “Moonlit Exterior.” We managed to pull together some really pretty awesome footage with our lighting set up. We pulled together our 750w ETC Source fours for the shot. Threw some half CTB (daylight gel) on them and did our best to light this scene where everything was visible and it still held the ambience of the moonlight. Once we had the dana dolly rigged and set, we commenced shooting the exterior shot. After that, we wrapped the day, got our gear loaded, and got out of the location.

Once we got back to our on the road DIT station, we dumped the footage and audio, and got to work on editing. The edit came together fairly easily and seamlessly. The real work started with the visual effects and sound design. For the glamour shots of Danny’s location, equipment, and trucks, we didn’t really have any visual effects. We just wanted it to look a little more “local” to give good contrast to the first half of the ad and the latter half of the ad. The effects heavy portion really starts at the concept break where we go from basic local ad to cinematic shooting with the wide exterior of the trailer and the two trucks. The sound design and VFX happened, for the most part, simultaneously with Ross working on the visual effects and Jacob working on the sound design. First we’ll cover the VFX, because, just for you, we put together a VFX breakdown of our exterior trailer shot!

For the first half of Danny’s ad, we didn’t have any sound in mind. We just wanted the voiceover (Provided by our amazing VO artist, Ryan Ramon of Ramon Voiceovers) and our music. Once we hit the break, we needed to change the tone of the music, Voiceover, and we jumped into “Cinema Mode”. You’ve probably recorded a video on your iphone on a semi windy day and the audio is harsh and possibly not even listenable. So, we have to dive in and create the auditory ambience that you hear here. So let’s break this down!

This is just a screen shot of the tracks involved in the last half of the Asphalt Tattoo ad.

So, the photo above just shows all the assets that went into this last half of this ad. It had 19 TRACKS of audio. So what are they? Well, we found our obvious assets first. What are some of the things that will obviously make noise or sounds in this? The tattoo gun is the most obvious to us. So we laid in the tattoo gun sound.

Once the tattoo sound was laid in we had to put it out in the distance. You’d be thrown off and confused if you heard what sounds like a tattoo gun right next to you when the new scene starts.

Now what are some of the less obvious sounds that are made or what are sound we can think of to add to this atmosphere to make it sound better? We decided to layer in some crickets to make it feel like a warm summer night. We actually had two different tracks of crickets. One track has crickets up close that feel like they are with in grabbing distance of you. Then we put in distant crickets so you felt like they were all around in the distance of this location. We also wanted it to sound like whoever is in the trailer has the radio cranked while they’re doing the tattoo. Next, if you watch the footage back, the awning on the trailer is flapping. What causes flapping? DING DING DING! You got it! Wind. But you can’t just throw in a wind track and be done! You have to find a wind sound that matches the intensity of the wind seen in the footage. So the wind is placed and we’re done right? Wrong! We might be half way there (whoaaaahhh livin’ on a prayer!). The awning is flapping in the wind, and it’s going to make audible noise at a distance. So, we had to find something to make that noise in our sound library. What flaps in the wind? Sails, flags,  etc? Yes and yes. So we went with a flag flapping in moderate wind. We’re almost done creating our ambience for this exterior. Now, something you may not notice in the footage is that we shot under a plant which was in the top left corner of the frame. Plants, too, make noise in the wind. So we decided adding some up close leaves rustling to allow the plant its shining glorious 3 seconds of fame. Some of the other thoughts that crossed our minds were “What do you hear in exteriors? Rural or suburban?” Well, a dog bark is always cool and we happened to have a doberman bark queued up. Then, to top it all off, we added some of that digital typing sound for the text coming into the bottom right corner of the shot.

So now, you just mix out the audio, slap it on the video, and go about your life right? Wrong, again! Why do you keep asking these questions?

We had to mix for exterior then take some of those same sounds, and move them to different tracks to accommodate what the inside of the trailer might sound like. Now we can have the tattoo gun sound like it’s right next to you, because it is right next to you. We also kept the crickets and the dog bark low in the mix, but wanted you to be able to hear them because the trailer door was open. Now that we’re in the interior, foley plays a big part. When Rusty stands up, it had to sound menacing. He is a BIG guy in a LITTLE trailer. So we had to do a little mixing and take a BIG wooden door creak and a leather chair creak and infuse them in a way that sound like he was getting up off the vinyl seat he’s on. We sprinkled a few boot steps and a punch in, and voila! You have your audio designed.

If you can’t tell by the word vomit on this page, we REALLY had a blast shooting with Danny’s asphalt from start to finish! So, if that wasn’t enough. Now it’s time to entice you with some behind the scenes photos! We hope you’ve enjoyed this project post and we look forward to hearing what you have to say about it! 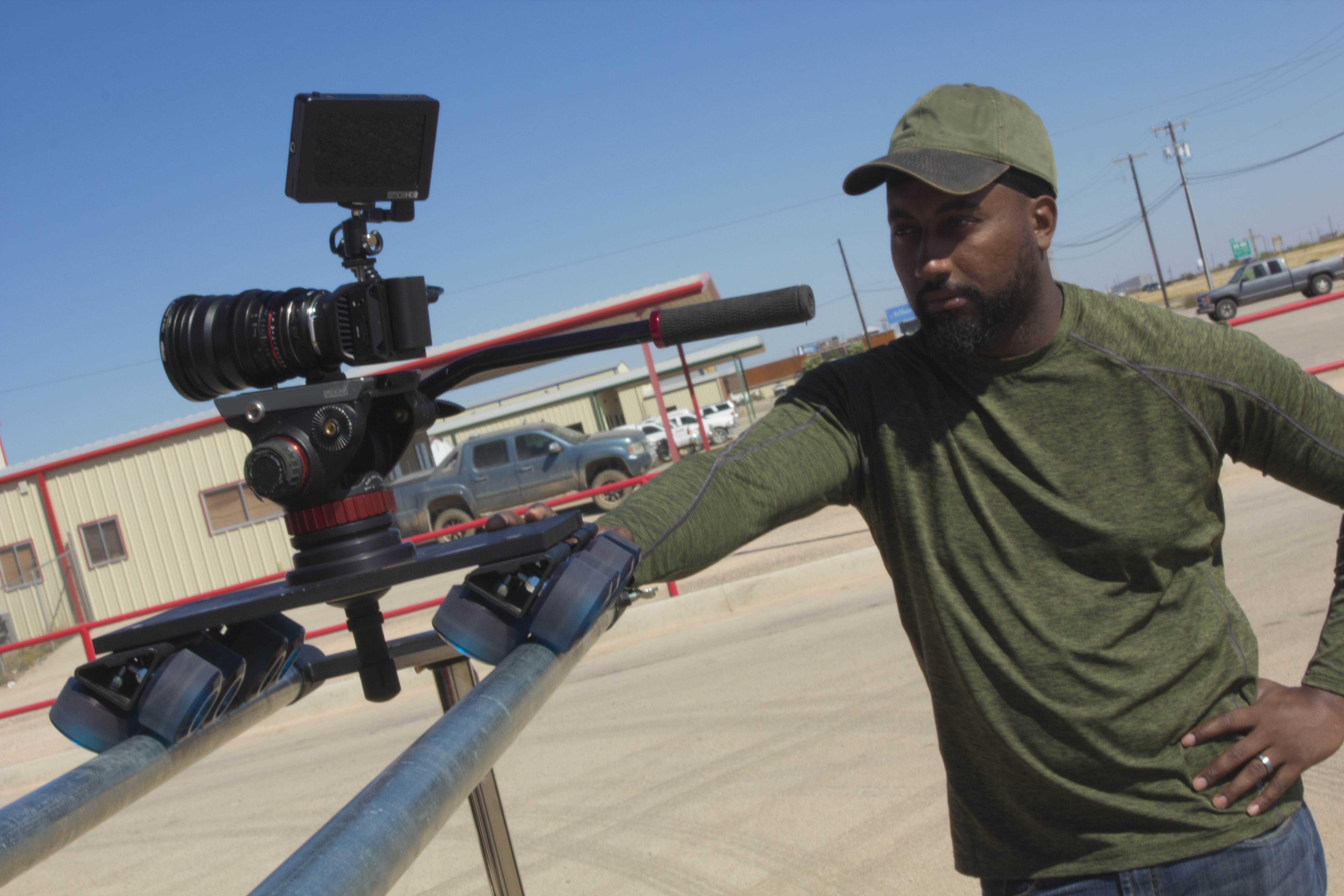 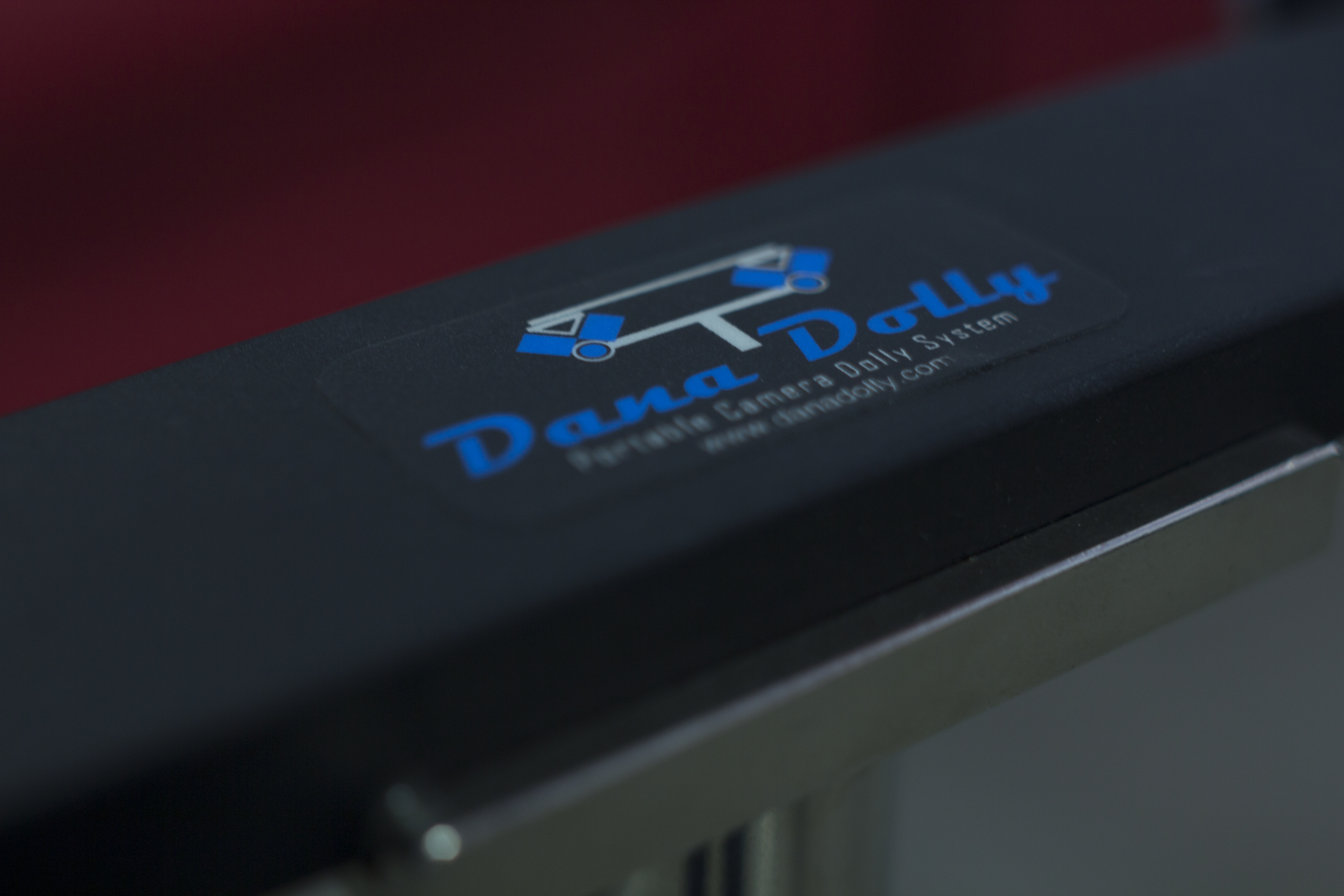 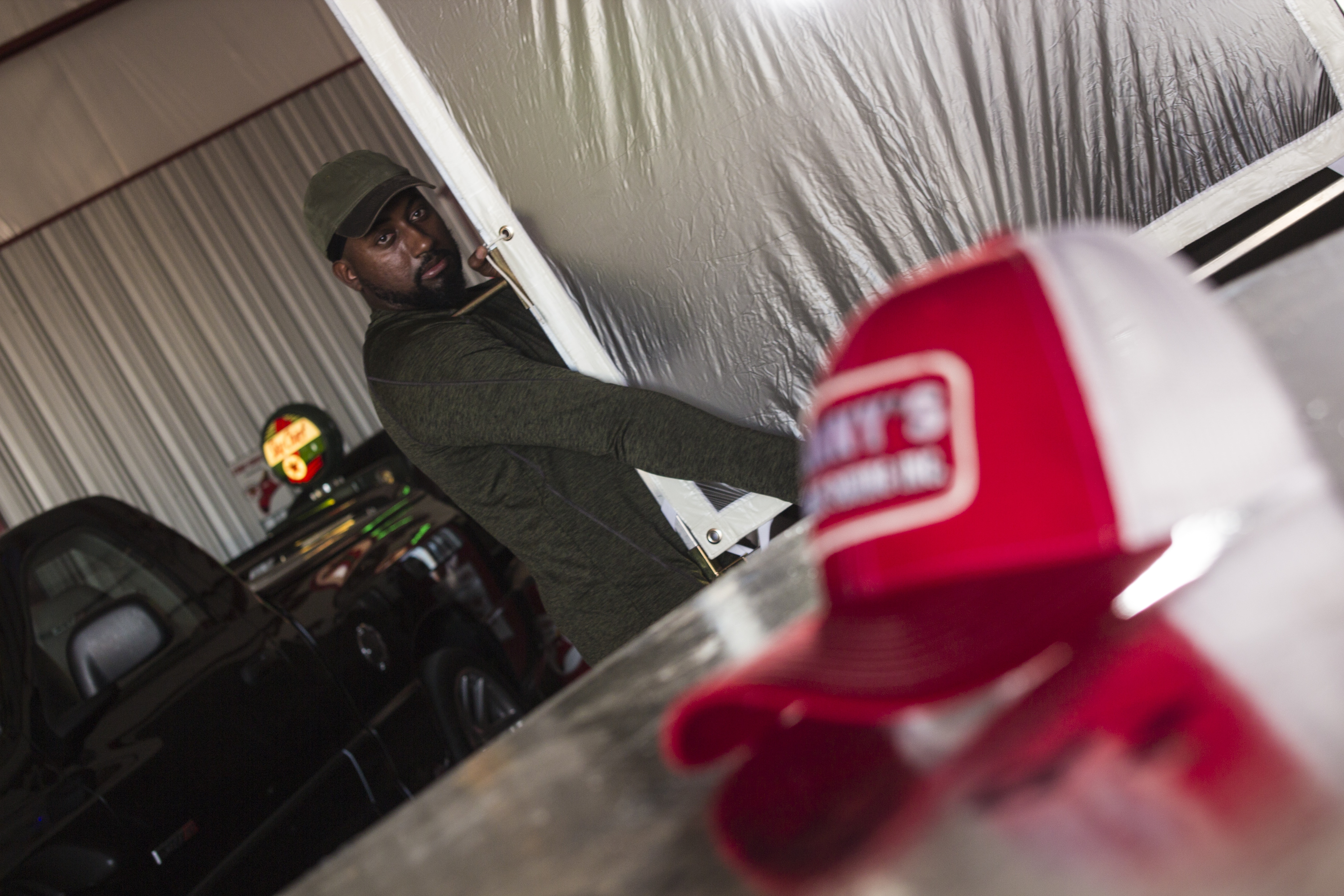 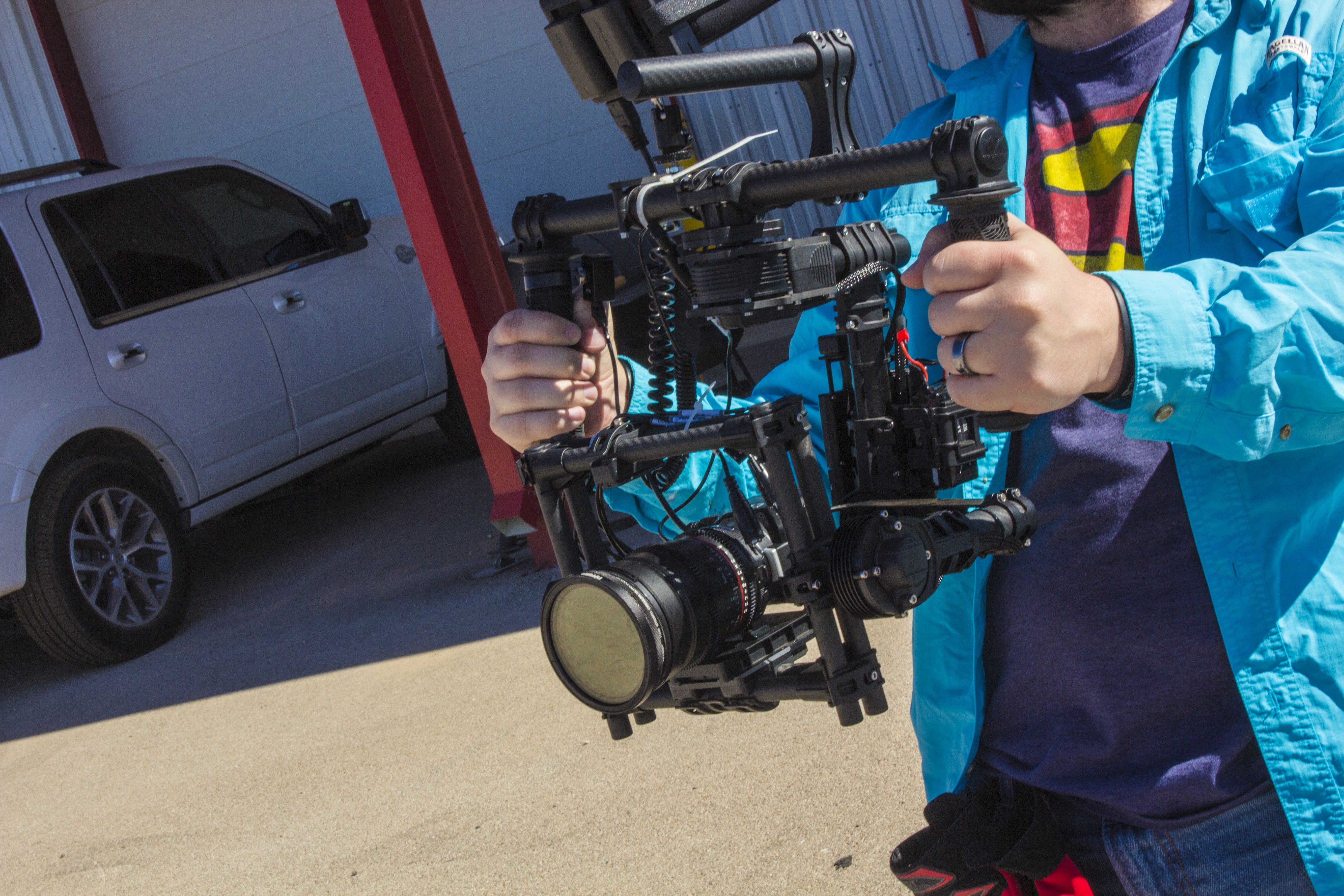 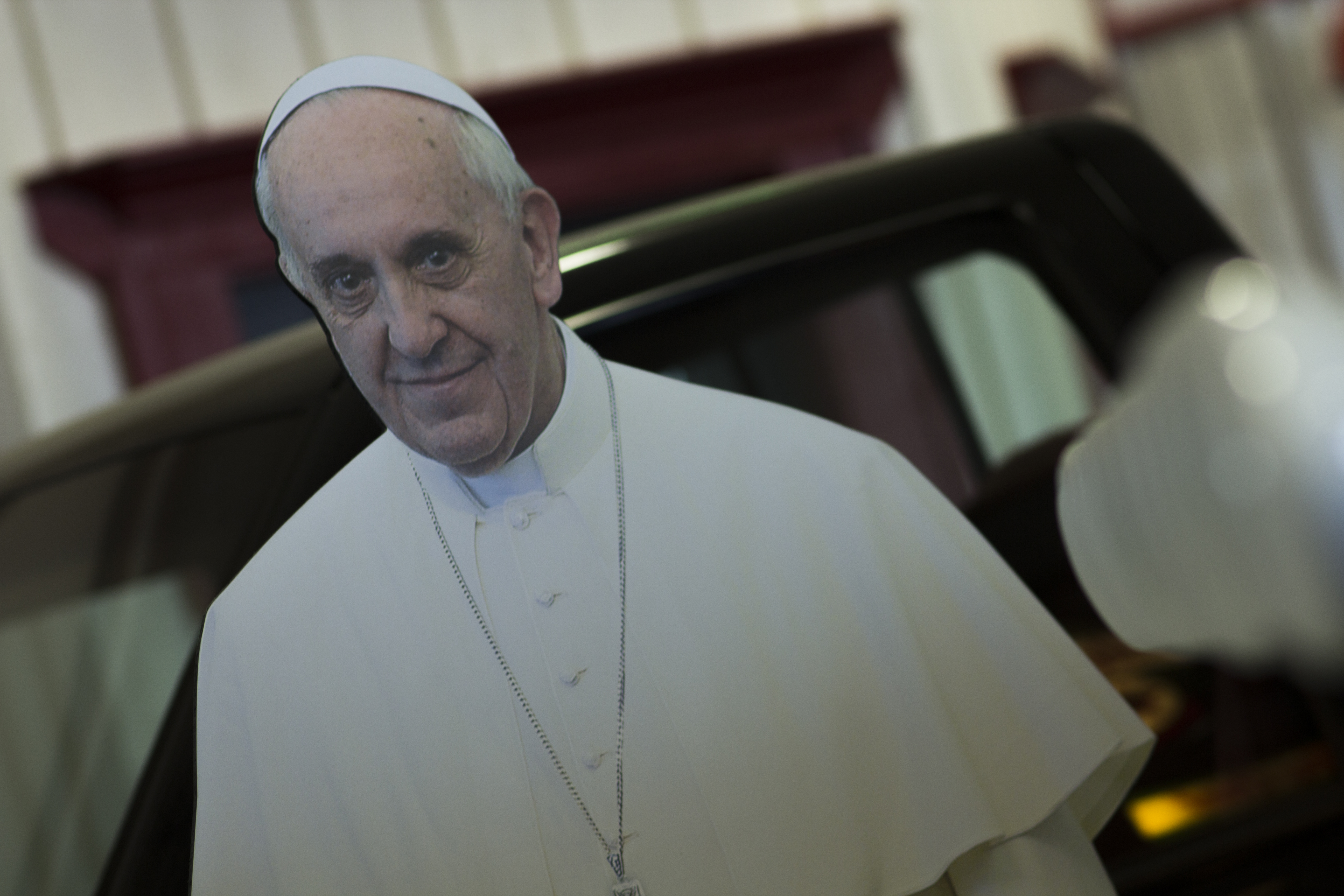 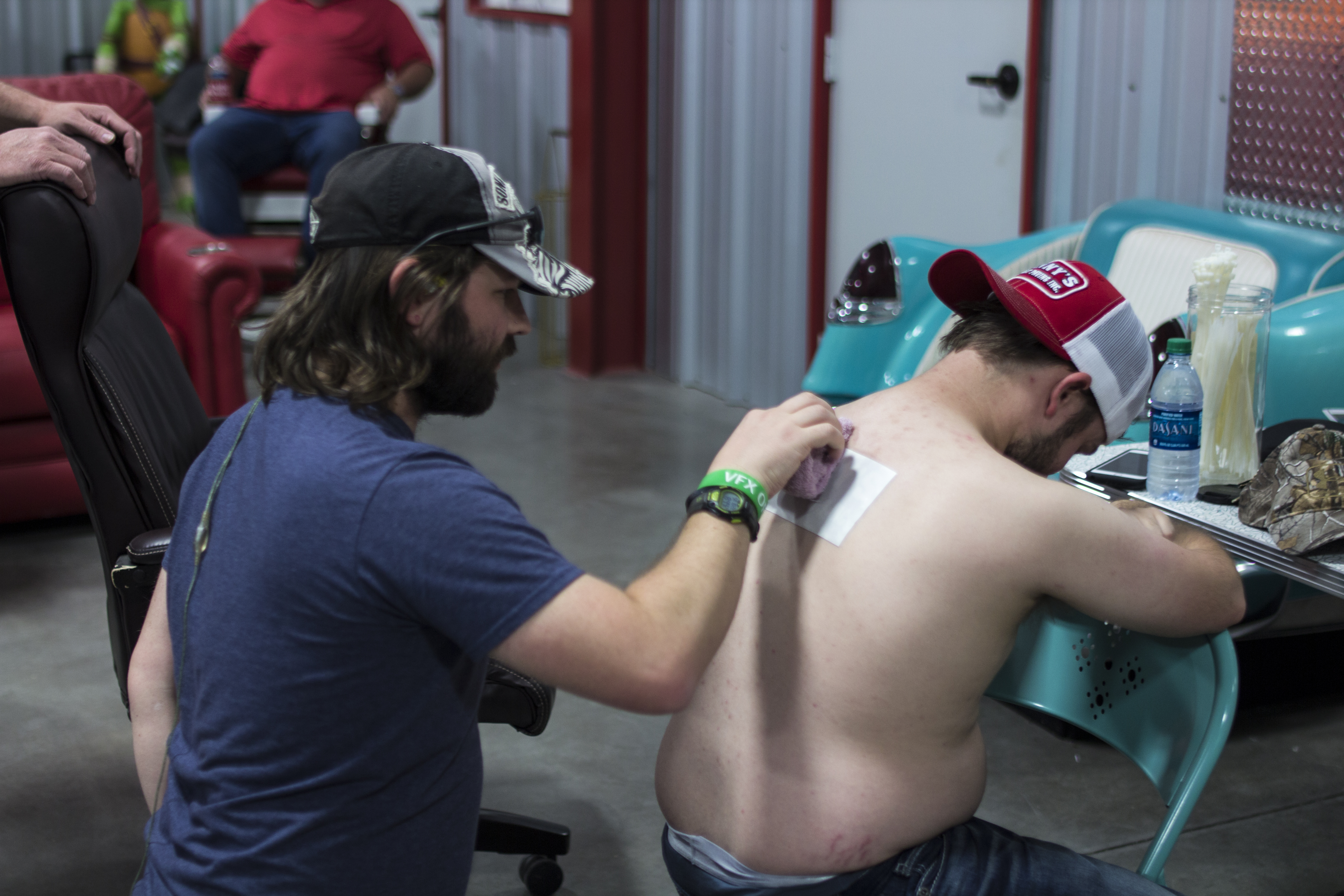 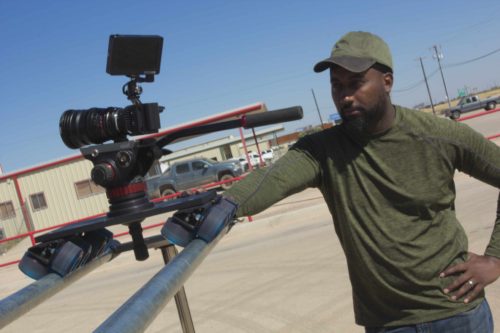 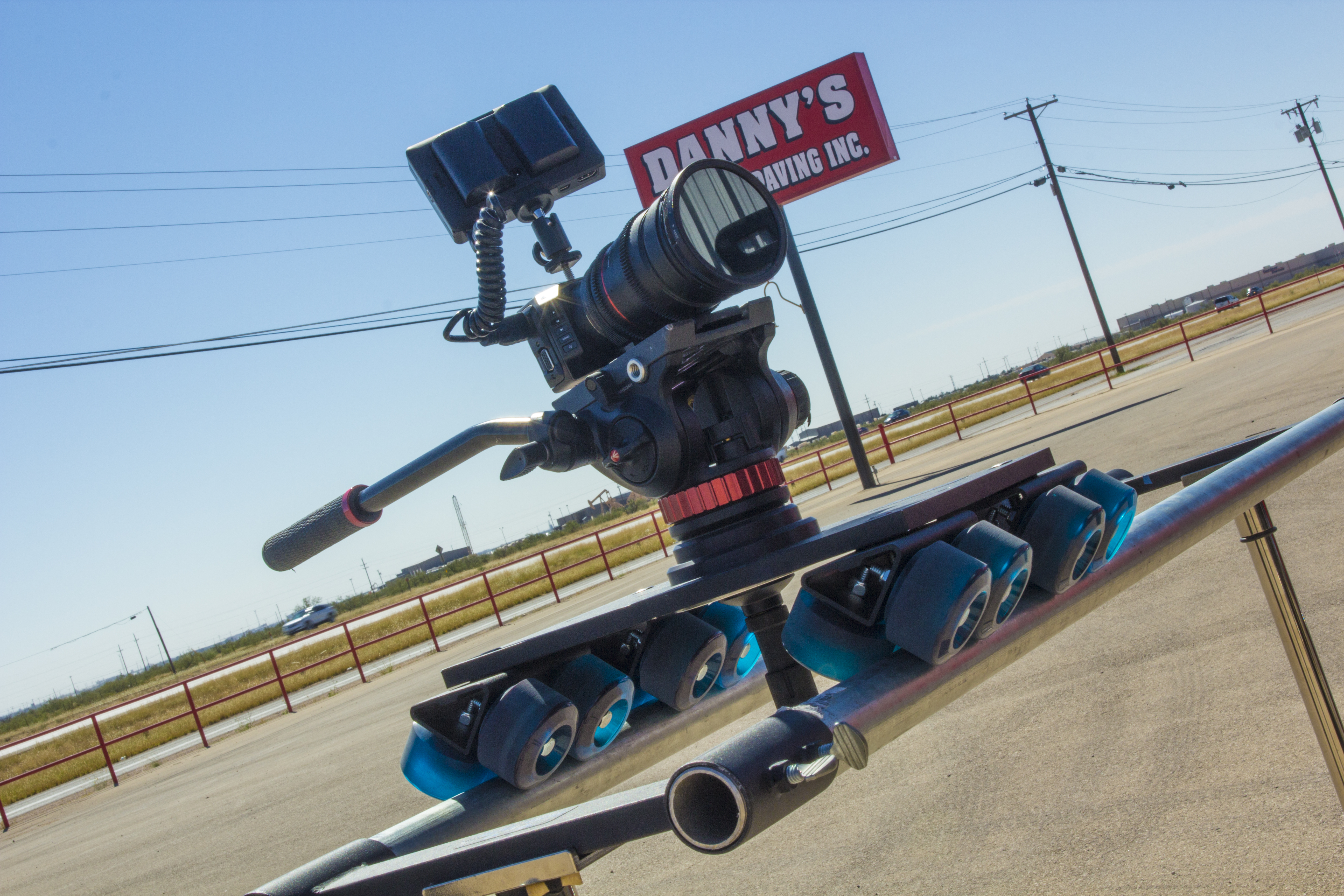 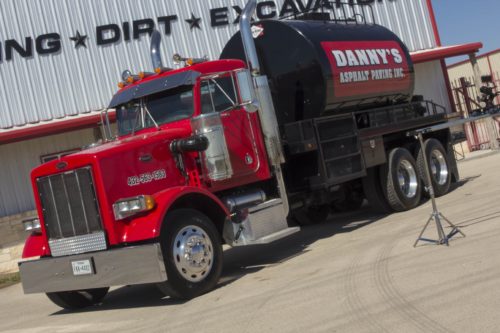 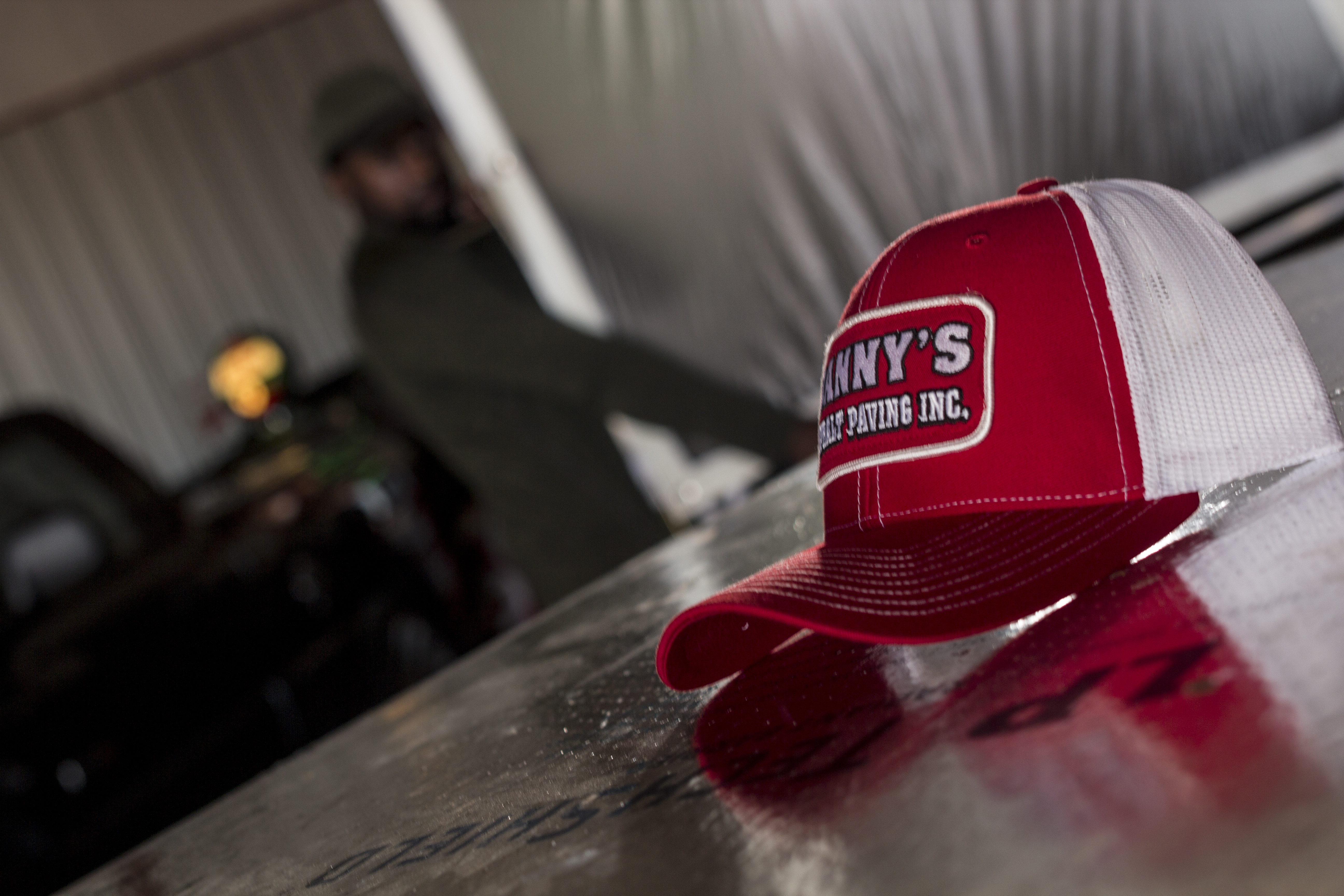 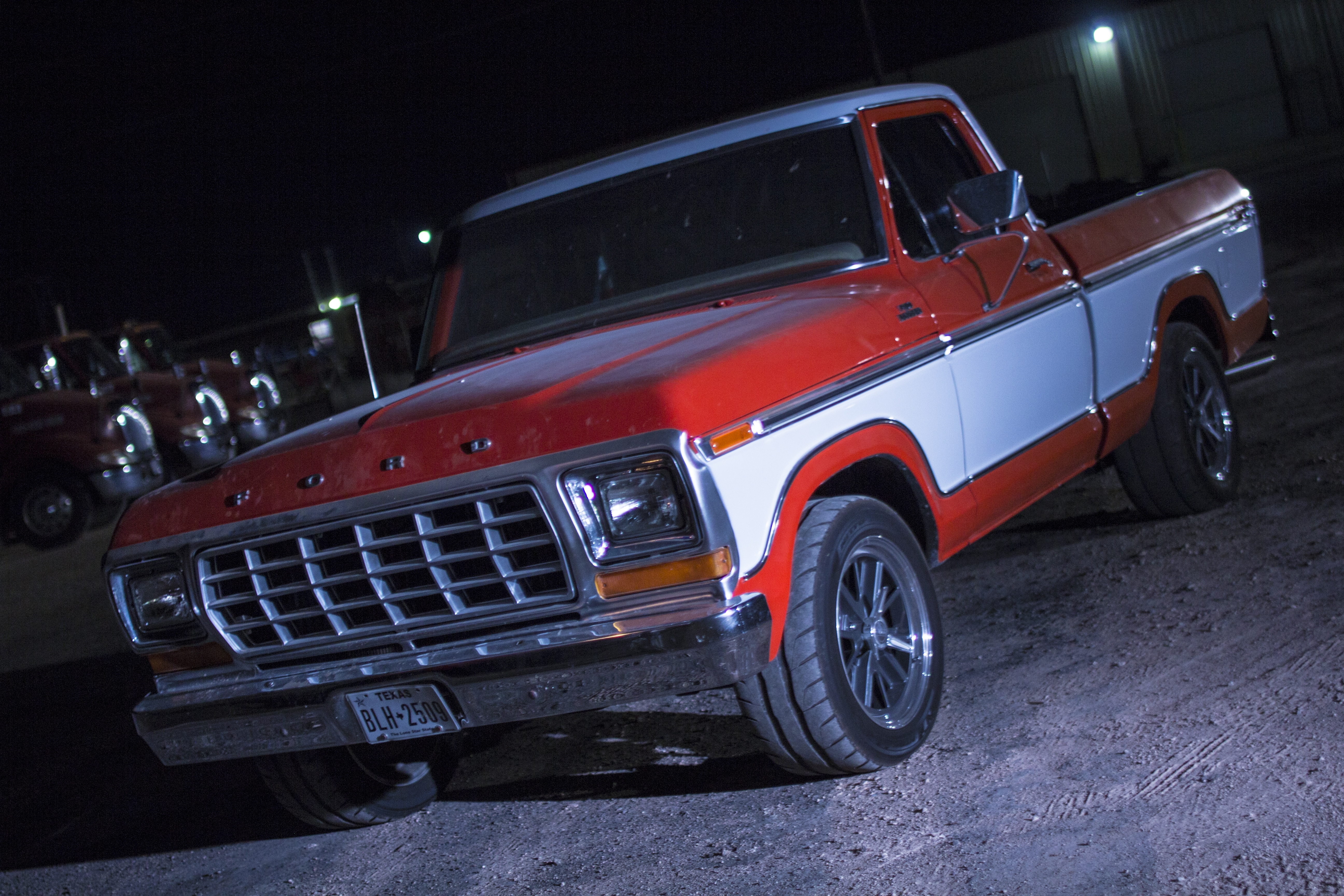 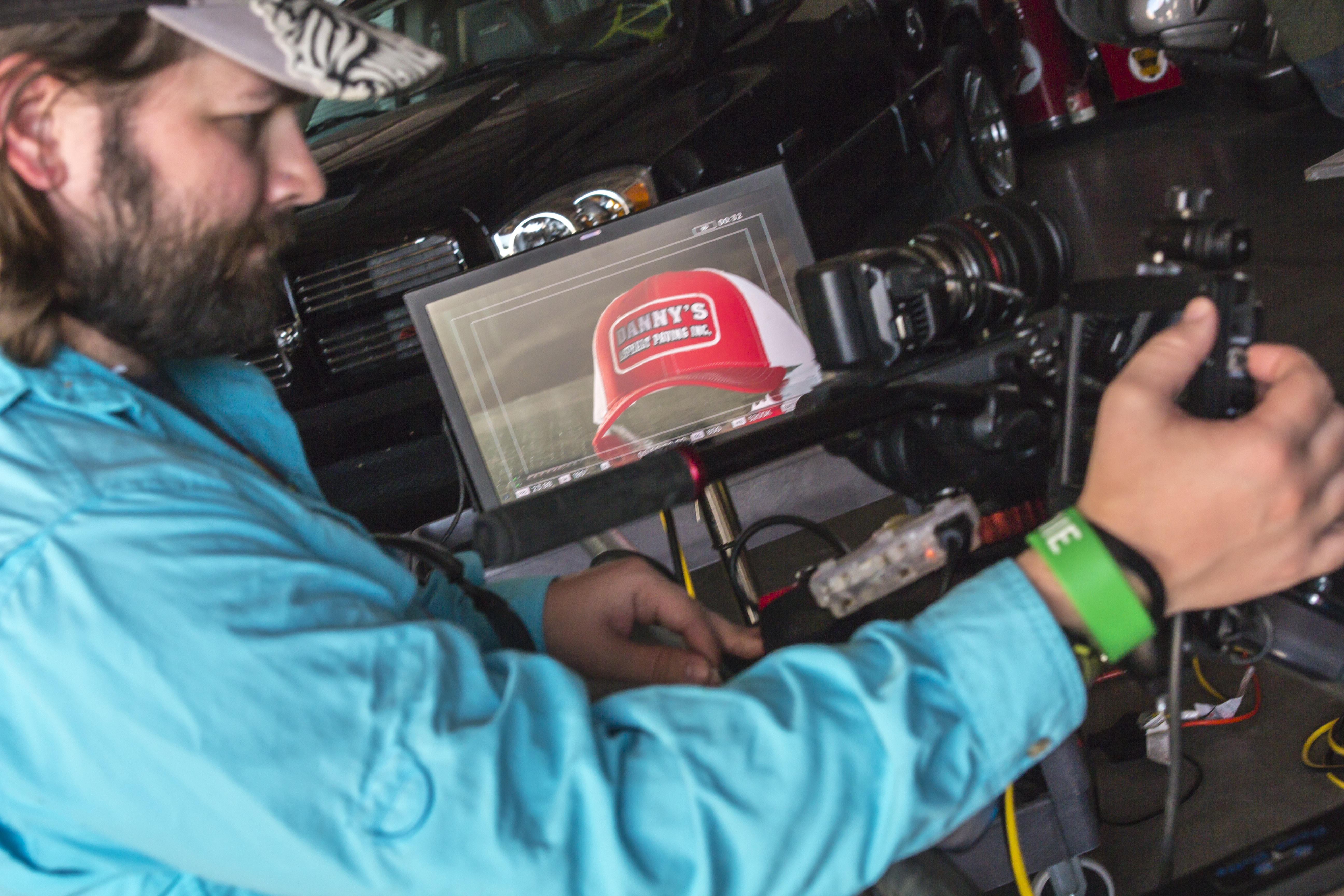 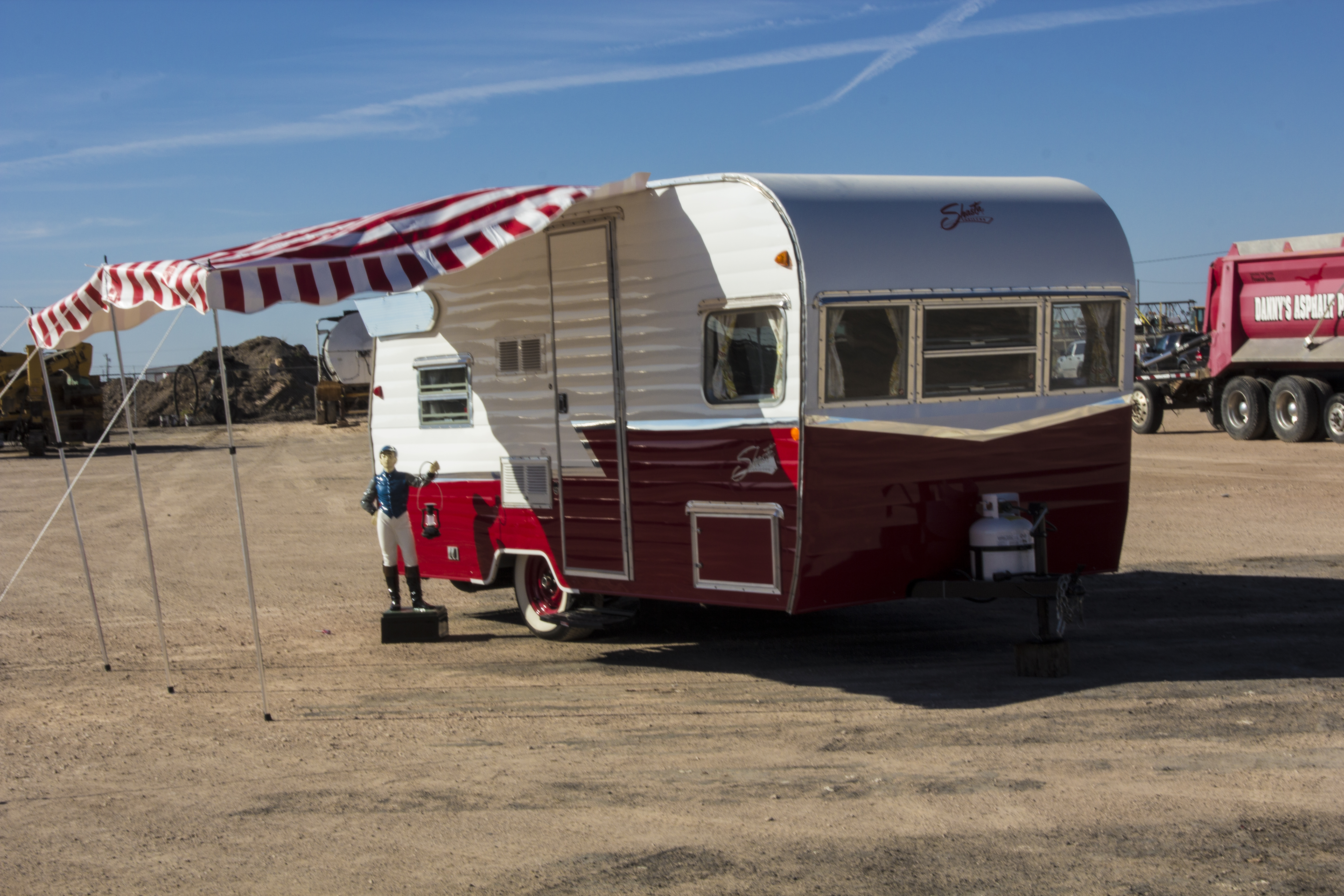 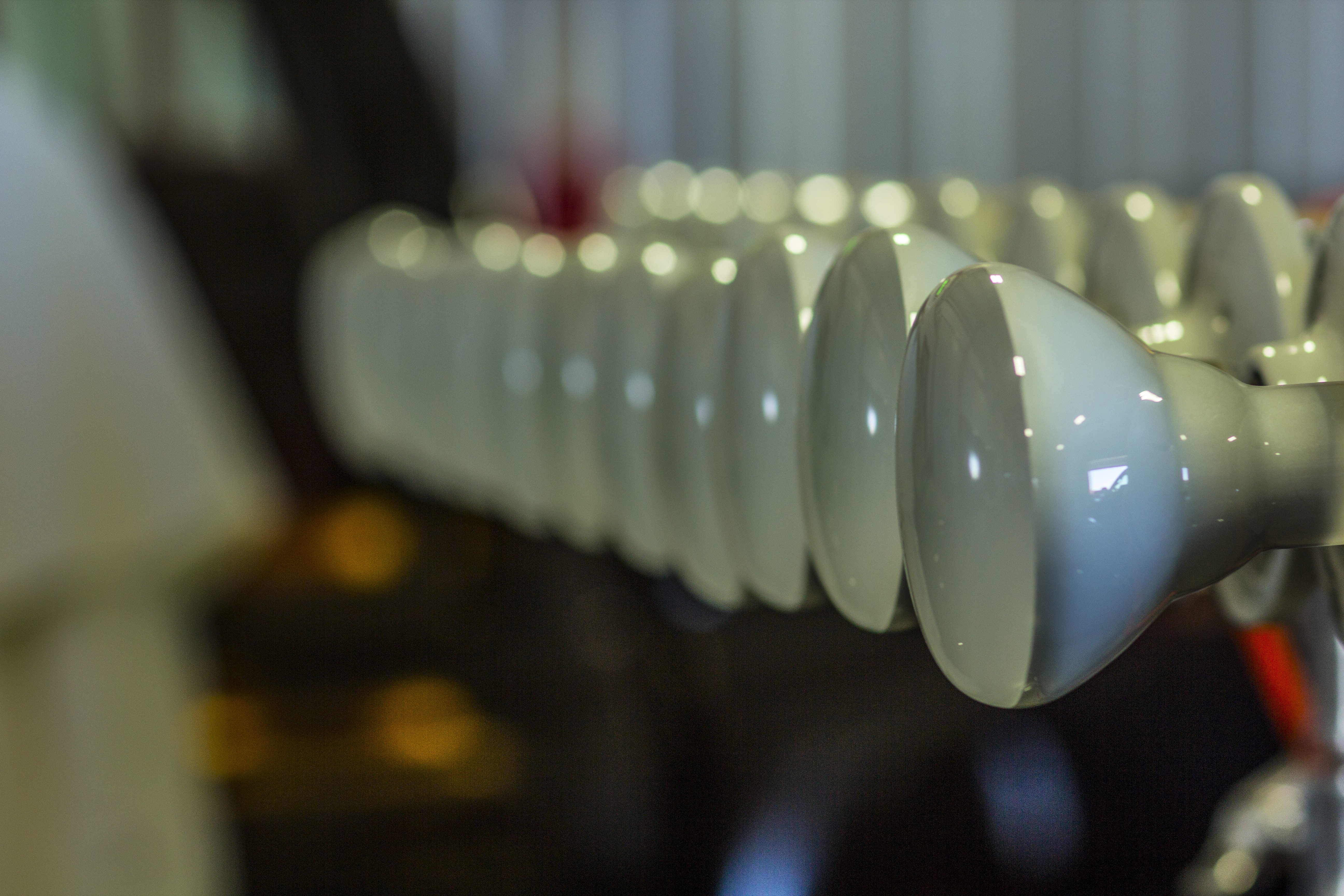 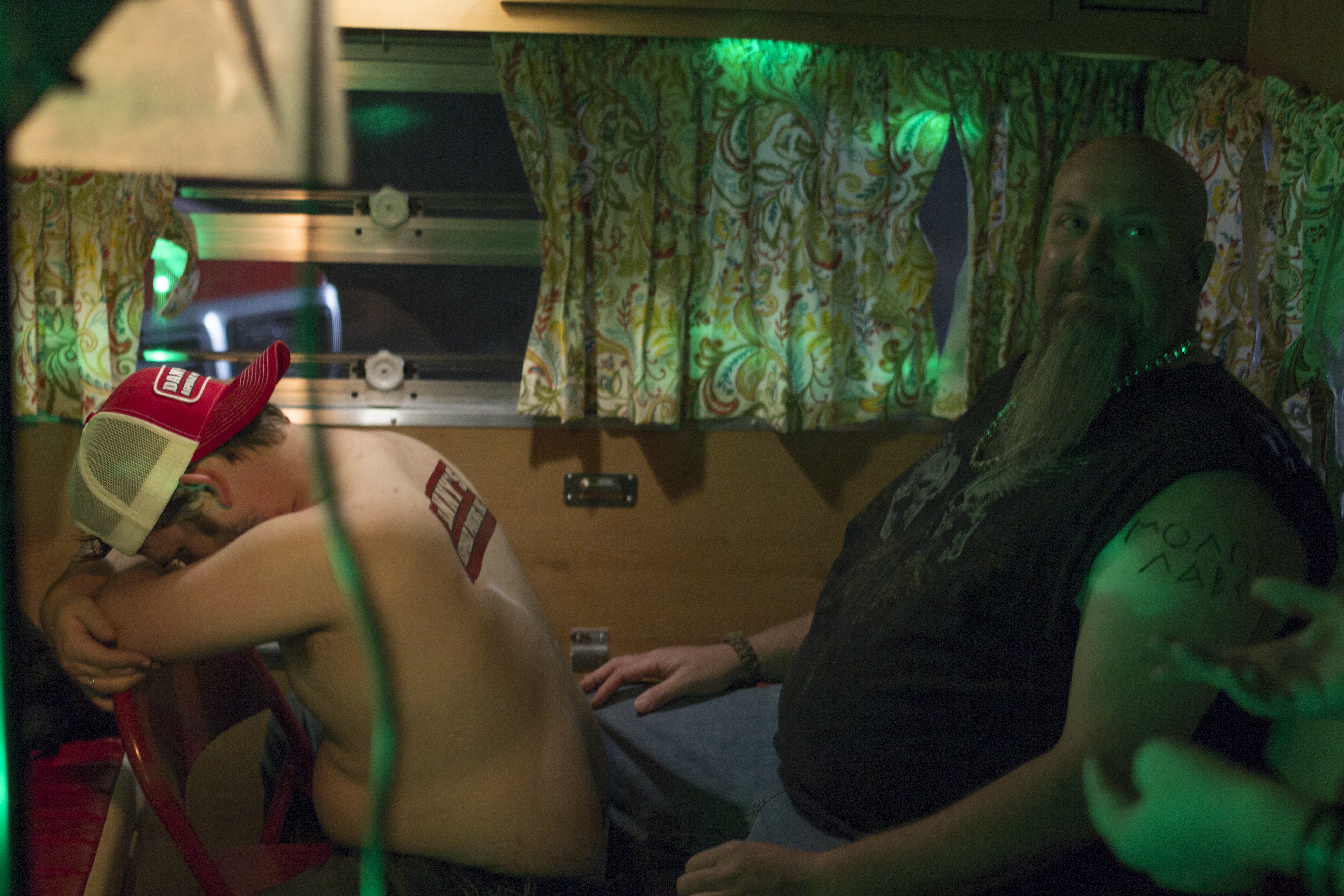 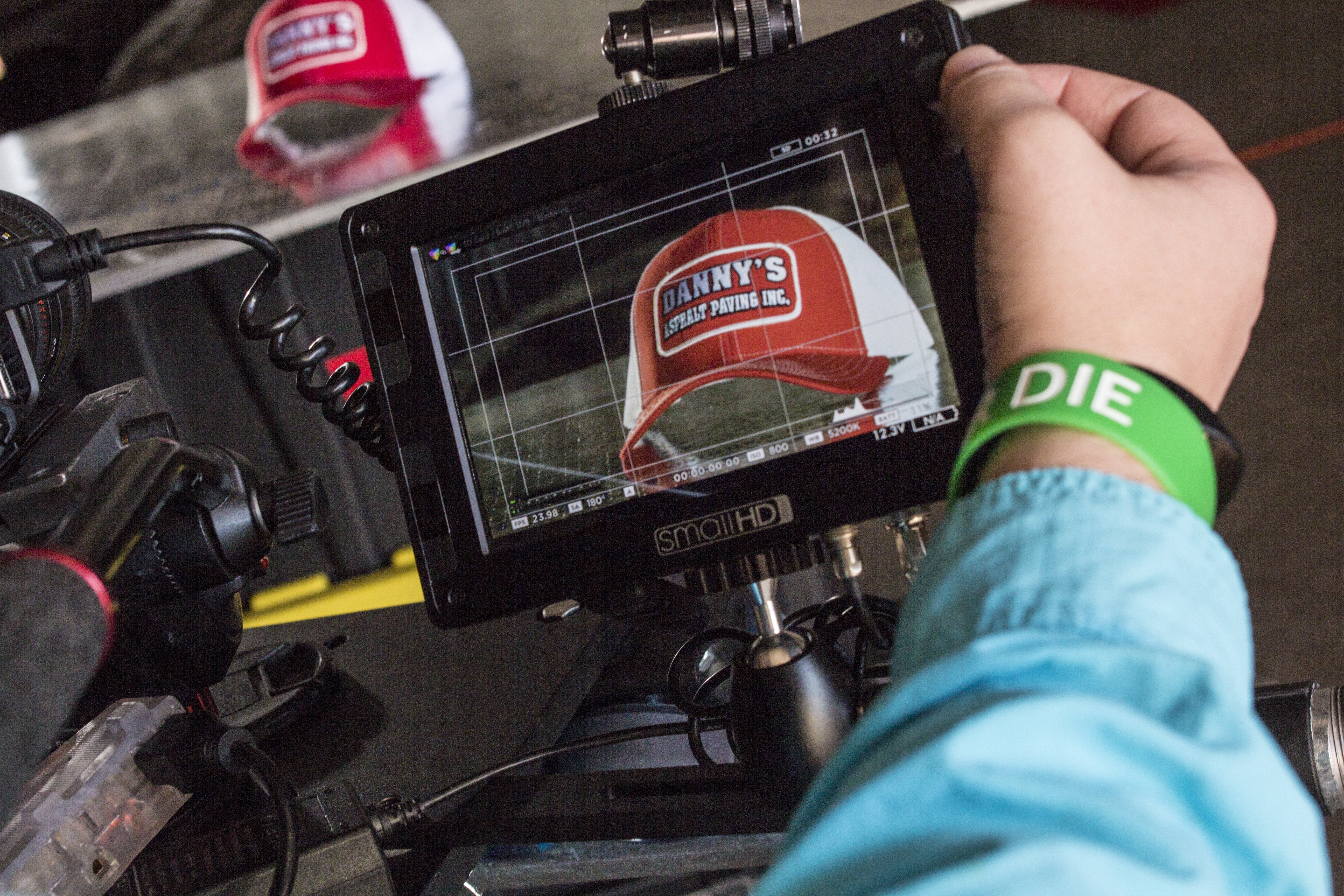 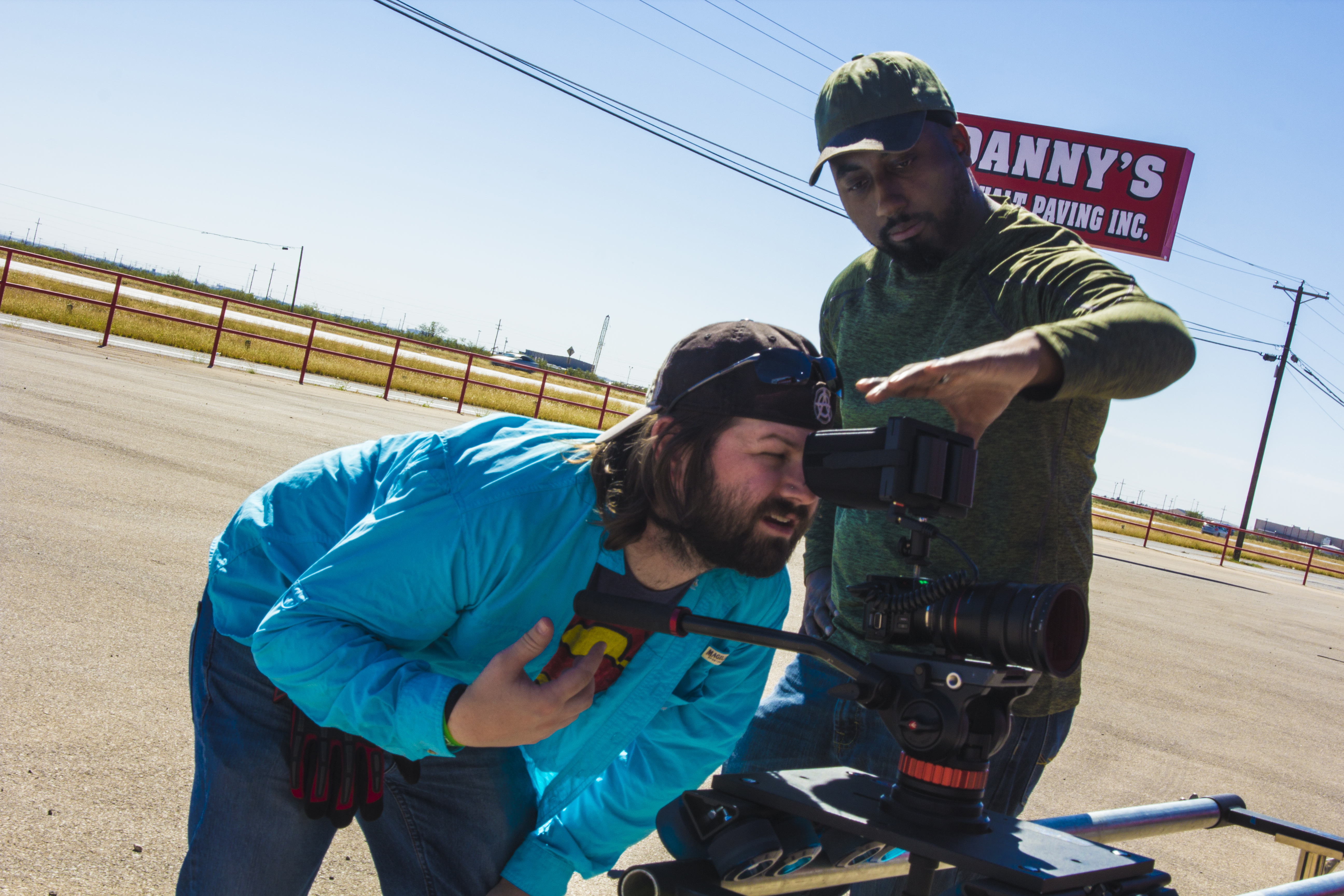 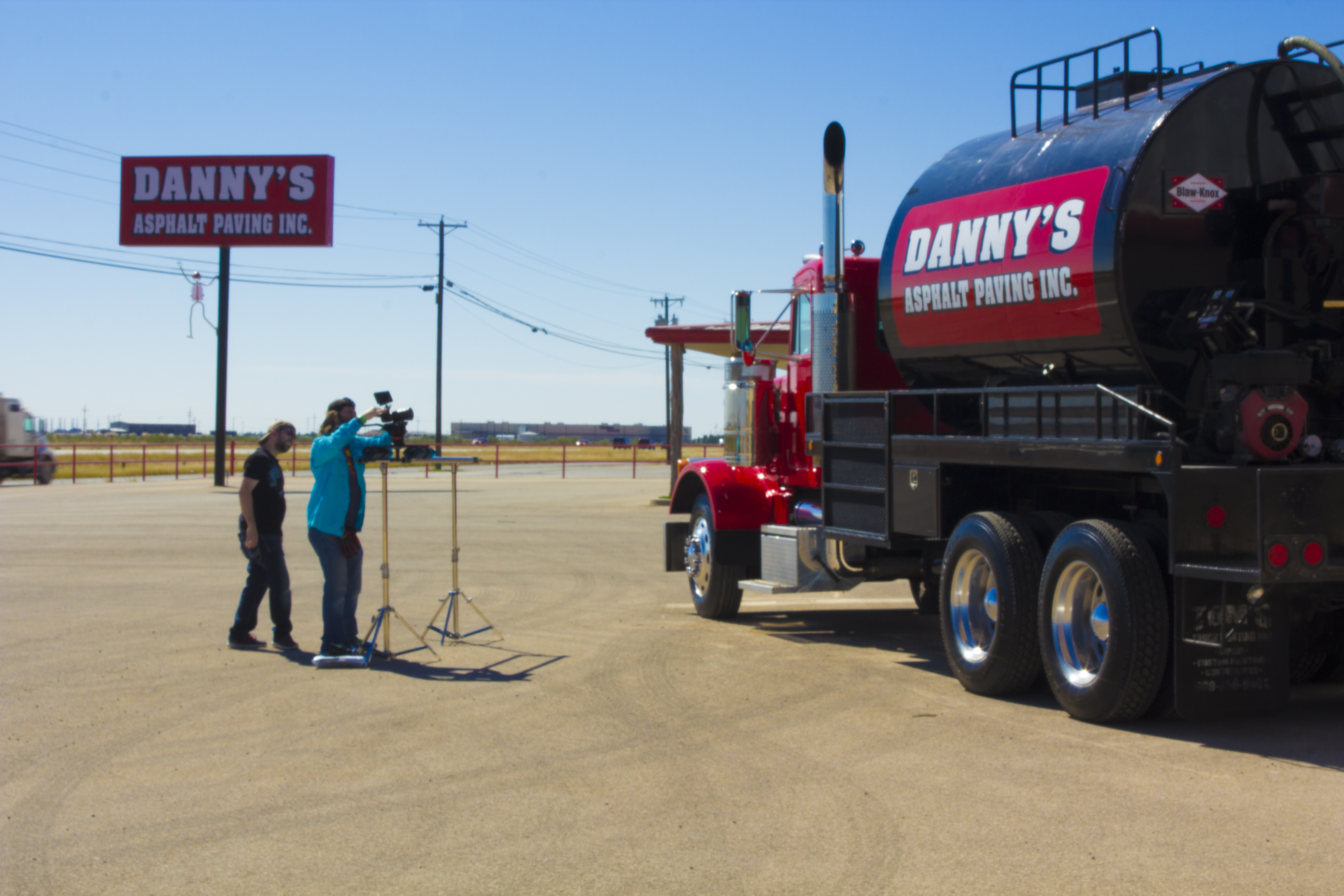 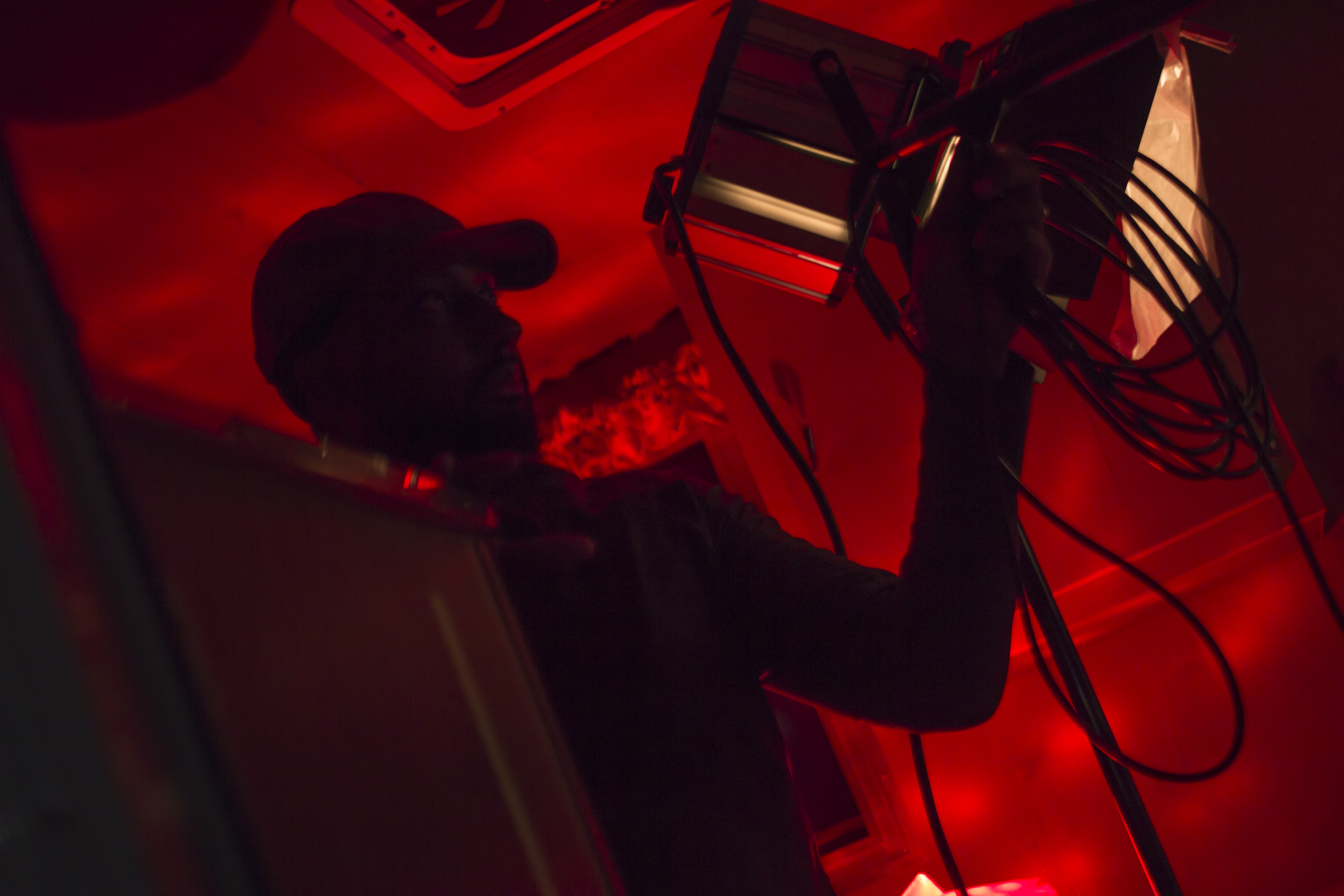 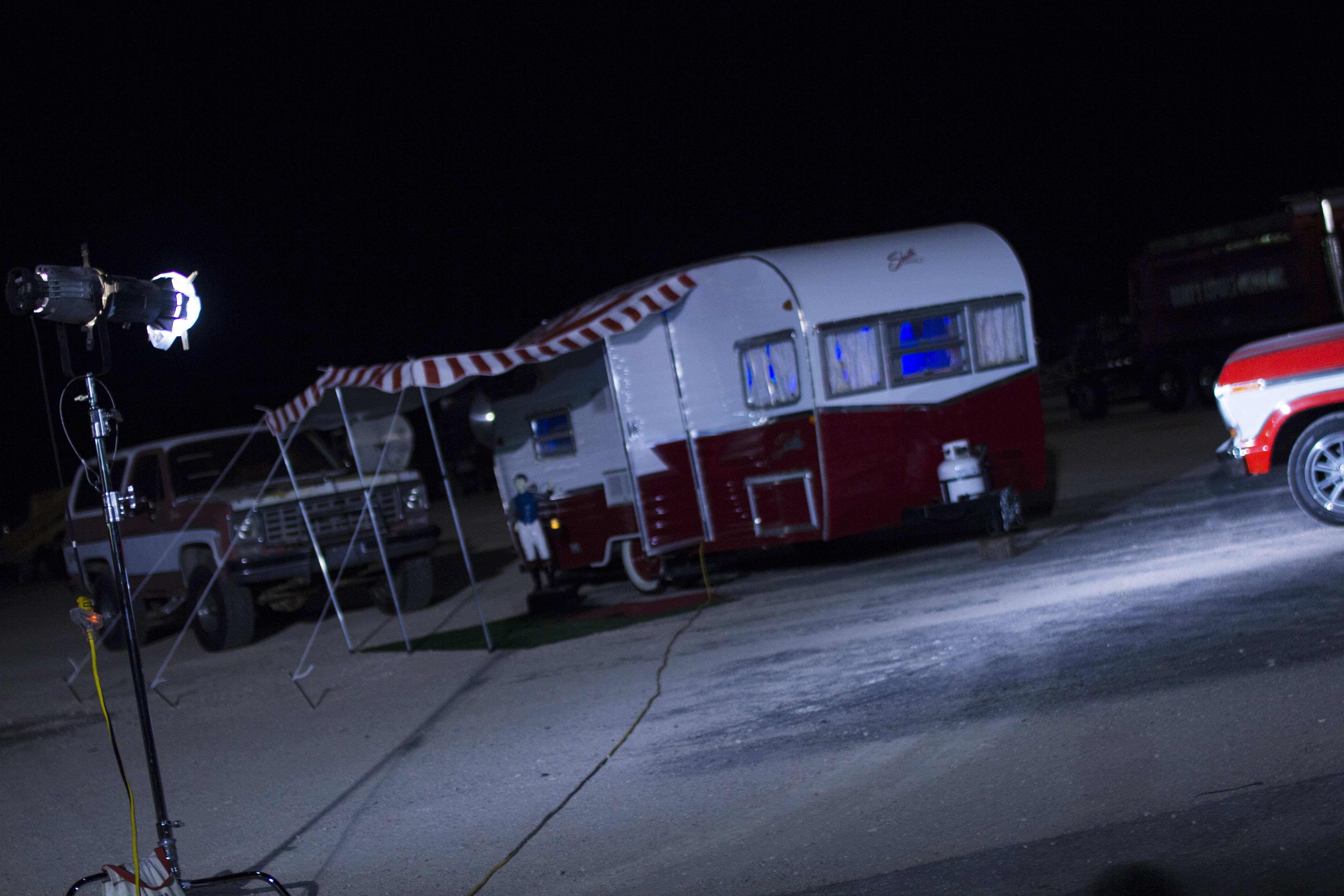 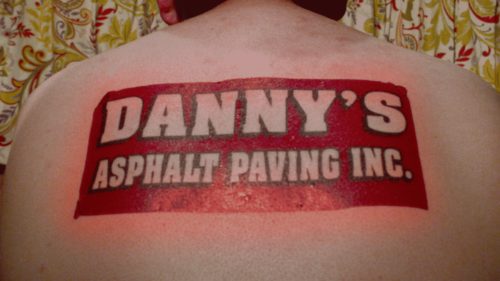