Out of three Super Bowl ads we produced this year, this one was the second. Last year, we did a commercial playing off of the difficulty of finding Affinity Steel and Pokemon Go. This year wasn’t much different. They, again, wanted to poke fun at how difficult their location is to find. I really love this about these guys because it shows that they have a sense of humor about themselves.

For certain, this ad felt difficult to come up with. Our client, Brandon, wanted us to pitch multiple ideas for each of his businesses that we were producing new ads for. For Affinity Steel, we had two ideas to pitch. The first one, came to me very quickly. I won’t go into details in case we end up using that idea at a later time, but, it was funny. When it came time to come up with a second idea, we were stumped.

How were we supposed to poke fun at finding this location without recycling the same joke as last year? The first idea was fresh and had no similarity to last year’s ad. I had to take a step back and think about it. Then, it hit me, what does it matter if it’s the same joke as last year as long as it has a new skin on it and it’s still funny? Tons of funny ad campaigns use the exact same joke with different characters in different situations, so, why can’t we?

Once I got my head around the feeling that I needed to reinvent the wheel, the idea hit me.

What if we have two guys who are on a kayaking adventure trying to find Affinity Steel? Originally, I had written the ad as a news story that would have a journalist telling the story and interviewing the two guys after it was all over.

I wasn’t feeling it though. So, I went back to the drawing board and asked myself what would be even more ridiculous regarding these guys’ story? The answer was quick in coming: a reality show.

Anymore, anything could pass for a reality show. Personally, reality tv is not my cup of tea, but, it would make for a great parody, in this case.

So, I rewrote the script and it all came together. The biggest caveat was that some of the shots I was planning were going to be quite the undertaking between visual effects, practical effects, and stunt work. But, if you know us, you know we like a challenge. 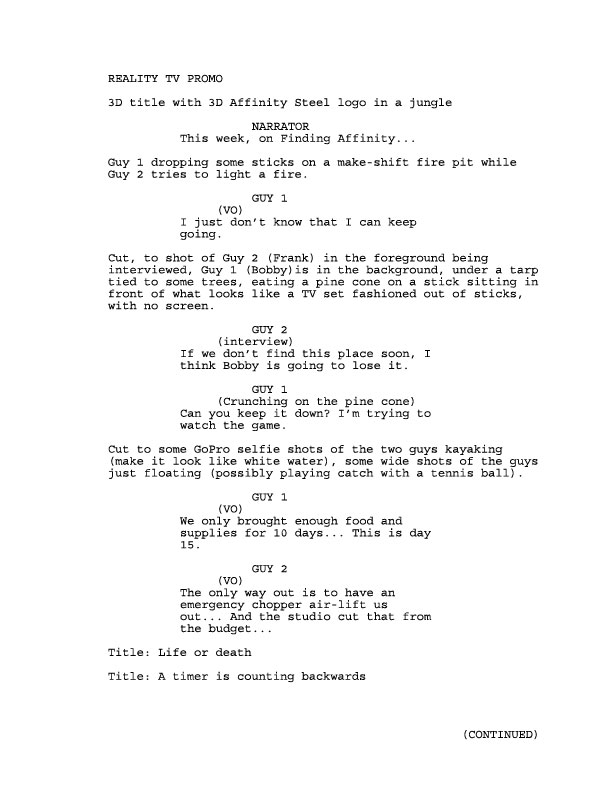 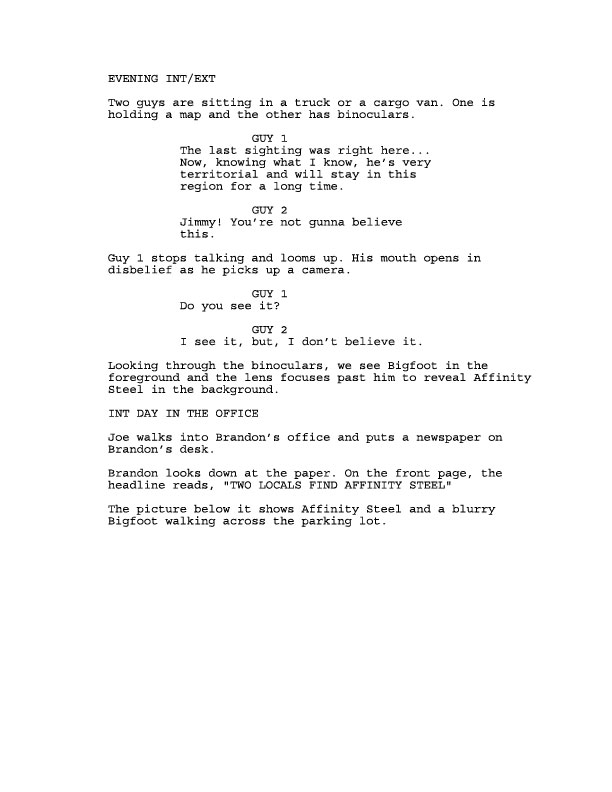 Once Brandon and his wife decided on this ad, we had plenty of details to iron out: casting, locations, logistics.

This was a particularly difficult area to cover. We had several elements working against us.

First, there is one talent agency in our region and the talent pool is not large. We didn’t want to have the same talent that every other local commercial has. Second, we had to shoot on weekdays, and when you’re working with talent who generally have day jobs, it makes scheduling difficult. Third, we’ve never had a successful casting call in our market.

As luck would have it, when I put out the casting call, Facebook decided to make it a job posting. This was helpful and unhelpful. The helpful part is that we got a ton of responses. The unhelpful part is that Facebook Job Posts are extremely limited and we couldn’t get the information we needed from those applying. So, we had to have everyone go to our website and fill out a form and we required an audition video from everyone. I think out of twenty-plus applicants, only three submitted videos.

The other thing that became quickly apparent was that almost nobody reads a job posting before applying. Our conditions and requirements were very clear and we still had people applying that wouldn’t qualify.

After a couple of weeks of lining up cast, we had our guys. Out of all of the auditions we received, Ian stuck out as being the best fit for what we wanted. Our other character was going to be filled by a friend of mine.

Our second big issue was that we had to find a location that looked like a river-side, had enough water to kayak in, be within a couple hours driving distance, and it couldn’t be dead. We also needed a location to set up a green screen for some of the big VFX shots. Ideally, we wanted the ad to look like it was in the heat of summer and we were shooting the second week of November. We knew it was a gamble, but, we also live in West Texas. We don’t have four seasons like everyone else. What we have is more of a lottery system. Every couple of hours, Mother Nature loads the seasonal weather types into a hat, shakes it up, and and draws. Knowing that, we knew that we would have a decent chance of shooting before Fall set in and the leaves all turned.

Given all of the criteria, we went to a couple of places around the Lubbock Playa Lakes and found a spot that would be perfect. We could shoot a campsite, and the kayaks in water all in one place. Plus, it was green and looked remote.

The only other location we had to deal with was the storefront at Affinity Steel. Since we had shot there before, we knew that it wouldn’t be a big deal to finish the ad there.

One of the main gags in the beginning of the ad was “Bobby” was starting to get delirious and was watching an imaginary game on a TV fashioned out of sticks, all while eating a pinecone.

I provided the TV and Jacob, along with our dad, Lonnie Hamil, started gutting the TV. Not long after, Jacob had transformed an older box TV into Bobby’s imaginary jungle-vision, boob tube.

The last issue we had to circumvent was logistics. We had to be able to transport 2 kayaks and all of our exterior camera gear in as few vehicles as possible, both to the Lubbock location and the Midland location.

The Lubbock location wouldn’t be as big a deal because we were still local and, although we would lose time, we could run and grab whatever we needed out of the trailer. In Midland, we wouldn’t be so fortunate.

For the Midland trip, we had a lot more to deal with. We were trying to keep things simple and things just weren’t lining up that way. We were trying to squeeze everyone into one pickup and haul production gear and kayaks, plus the stunt gear for the kayaks.

Problem number two is that the Kayaks that we were borrowing were coming from Odessa and we had to figure out how to get them to Lubbock.

Fortunately, our dad was going on a kayak fishing trip earlier in the week and the gentleman he was going with had a kayak trailer! As a bonus, Wade, the trailer owner lived in Odessa. So, as luck would have it, we had a means to get the kayaks to Lubbock and a trailer to take them back on. We would just have to figure out how to cram all of our production gear, and travel necessities in the back of a pickup truck.

With all of that ironed out, we were ready to hit the ground running when it came time for production.

In the next post, I’ll be diving into how we shot the ad and the challenges we faced.

In the meantime, be sure to post your questions or comments, and, if you’re interested in speaking to us about our services, be sure to head over to the contact page!