Once again, for your viewing pleasure, here is the Affinity Overhead Door, Co. Super Bowl 2018 Cavemen commercial. This post, I’m going to be talking about how we took the footage we had and tied it all together to make it all work like it was supposed to.

As with the shooting of this TV commercial, I had to form a plan of attack for the editing, effects, and sound on this ad.

I knew that the first thing I would have to do was assemble the edit. Firstly, it gives me a feeling for the pace of the ad. Secondly, it keeps me from spending too much time adding visual effects to footage that won’t be used.

Fortunately, we had planned the shoot well enough that the edit came together fairly easily. There were some places that were rough, but, the effects shots would determine what would happen. So, I got enough done that I could start on the heavy effects. 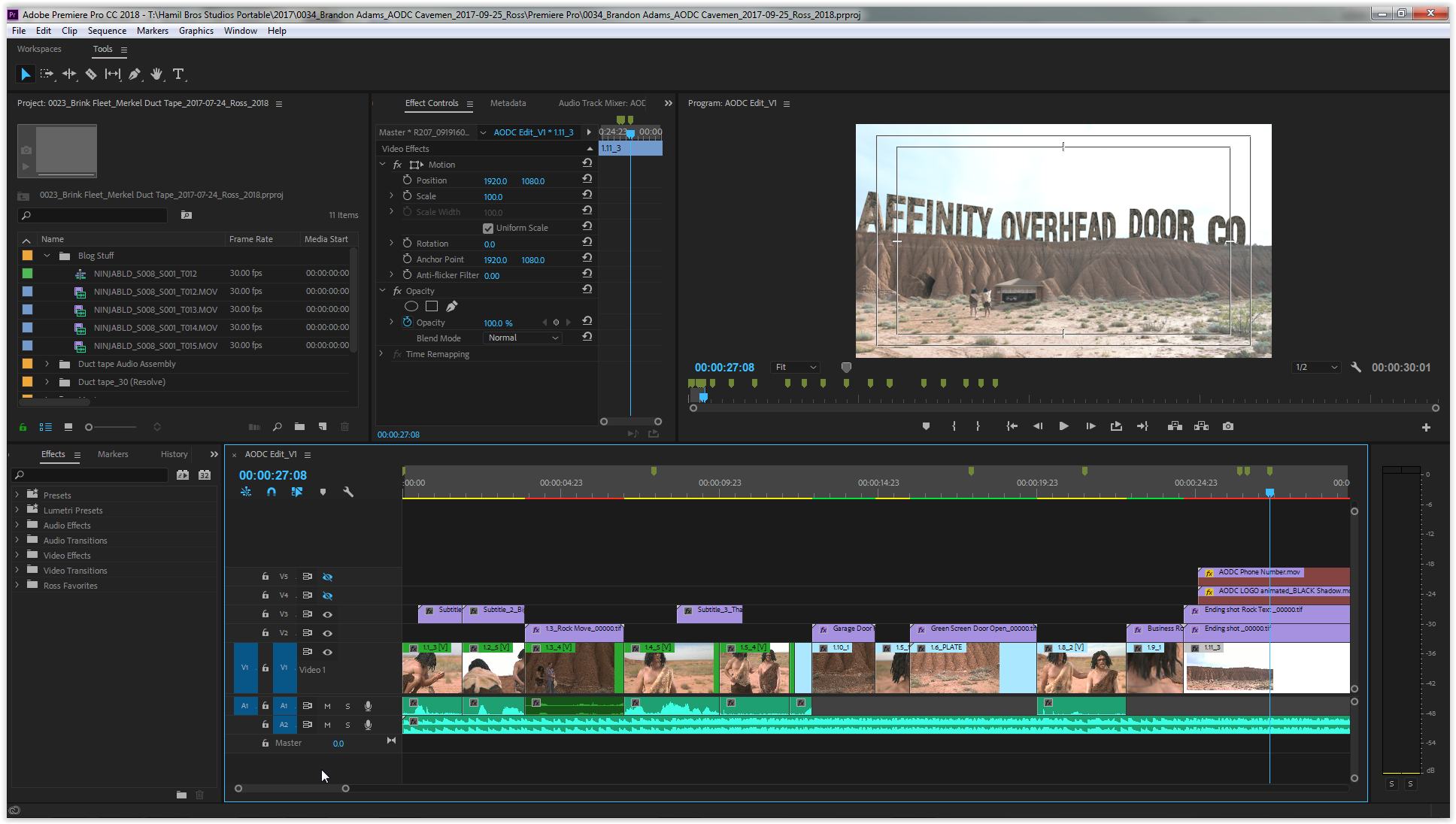 This was probably my favorite part of the process. I had some ideas on how I was going to tackle this, but, I sure was glad that we had that extra day.

[Beware: these breakdown videos are longer than normal, but, if you’re into behind-the-scenes kind of stuff, hopefully, you’ll really enjoy seeing how the magic happens]

The first shot I tackled was Ryker moving his new cave rock. In the video below, I will go over how I accomplished this shot.

The second major effects shot(s) were all of the shots with the garage door in them. Given how many shots we had with the door in it, I planned ahead and used a fairly simple approach.

Using a technique I picked up from Gareth Edwards (the Rogue One, and Godzilla director), I basically started on the close-up shots of the garage door and worked my way out because if the close-up looks good, the wide shots will be great!

Here’s how I did that.

*Something worth mentioning: about a week before the Super Bowl, we were asked to also remove the vehicle out of the garage. That was done after having recorded these explainer videos.

When I first wrote the script for this Super Bowl commercial, I knew that there would be subtitles to show what the cavemen were saying. The upon writing them, they were succinct and funny in their own right. However, when we finally added them in, they fell flat. They weren’t even kind of funny. They just flatly said what each respective caveman was saying.

Since this is how some of the punchlines were getting delivered, it simply wouldn’t do. We had to come up with something better.

Talk Dirty to Me

At this point, Jacob had already designed and inserted the original dialog titles, and it wasn’t funny. What do we do?

Luckily, since we weren’t making any actual dialog changes, nothing had to be reshot and the timing should have worked, no matter what. The problem, though, was, how is this supposed to be made funny. The original funny lines weren’t funny, so, what would be?

We decided that it would be good to make the conversation a bit less refined. I think we spitballed back and forth for a while and danced around some good ideas, but, we never really landed on them. I decided to keep working on whatever I was working on at the time and let my brain focus elsewhere to see if something would just hit me.

I was frustrated, if not a bit angry, because this one, tiny thing, could kill the entire idea.

Not long after, Jacob, from across the office, was like, “Dude….. Come watch this.”

I walked over to his desk and there they were. The perfect lines for our subtitles. They were funny. They said everything they needed to say. And, they elevated the comedy of the ad to something that we felt was gold.

If you can’t tell by now, sound is a huge part of what we do, and I could, literally, write an entire blog post on the sound design of each project we work on, however, I’ll spare you the grueling details. Suffice it to say, the only thing you hear that was captured on-set, was the cavemen grunting at each other.

I would also be remiss if I didn’t point out that we found the dumbest, most perfect music ever for this ad. It was so bad, that we couldn’t help but laugh every time we hear it. We also slap our foreheads, roll our eyes, and wonder in disbelief that we actually paid money for that music.

As with all of our projects, color grading is a huge part of the entire process. For this particular video, there was nothing absolutely crazy about the coloring beyond some basic things to make certain things pop out of the scene more.

Basically, we had a ton of fun shooting and producing this Super Bowl commercial for Affinity Overhead Door, Co.

Much to our pleasant surprise, when we sent the ad off for approval, it was immediately approved as-is on the first draft, which really made us feel even better about it!

We hope you enjoyed the ad!

We hope you have enjoyed this breakdown of all of the parts of the Affinity Overhead Door, Co. Super Bowl 2018 Cavemen commercial. If you would like to know more, please, jump over to our contact page and reach out!