Something A Little Different

It has been a while. It has become rather apparent that blogging isn’t a habit that has been easy for me to get into.

Lately, we have found a little break in the wedding video side of things and have ventured into making a short film.

A few months ago, Jacob and I made a faux-movie trailer for one of his media classes. After completing it, Tim Day (Day at the Movies) asked us to submit a film to the Lubbock Christian University Film Festival. It wasn’t a hard decision to make. 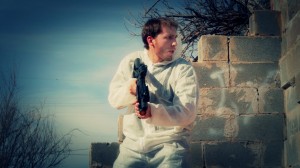 Our actor, James Wheeler, wreaking havoc on some unsuspecting individuals

Last month, or so, I wrote a script and last week we started production. So far, we have had 5 full production days and have at least one more.

This is going to be an action/suspense movie.  Having watched action movies for as long as I can remember, this is the project that I have been waiting for. I am anxious to share it with everyone after it makes its premiere at the Film Festival.

With the limited time we’ve had to work on this, it has been a process of coming home after shooting and immediately logging the footage and editing, compositing and coloring, since there wasn’t going to be time to do post production after shooting was completed. So, it’s all been happening at once.

It has been a wonderful experience and I owe it all to my amazing crew: Jacob Hamil, James Wheeler, and Abby Johnson.

It has been an all or nothing kind of project and everybody has had multiple jobs. Whether it’s acting, running a camera, holding the shot slate, a microphone, or a bounce card, everybody has done just about everything.

Once the movie is released, we will have a blooper reel. Jacob has been piecing it together as the dailies come in and has had a hard time editing because he can’t stop laughing. I hope everyone else enjoys seeing how we keep our sanity on these long shoots (or lose it depending on how you view it).

On another topic, we have recently been given presented with some great opportunities and one exceptionally unique opportunity. As more develops on this particular course, Jacob and I will be keeping everyone updated. I’m very excited to share what it is, but, you will just have to wait. But, believe me when I say that it is something that everyone will want to be a part of.