Your #1 Video Production Studio in Lubbock, Midland, and Odessa

Well, after months and months of work on the ground and on the web, things are starting progress rapidly.

Over the next month, Jacob and I have lined up over 10 different video shoots. We’ve managed to land an extremely large client (for us) and are very excited to share with you what that will entail in the following weeks.

We recently shot a commercial for The Diamond Company in Odessa, TX and have done some work for the Insane Inflatable 5k run. We hope to be sharing the 5k video with you very soon.

One thing that has been a challenge for us since the beginning has been our presence on the Web.

Well, after months of hard work, planning, and execution, we’ve finally ended up where we want to be. 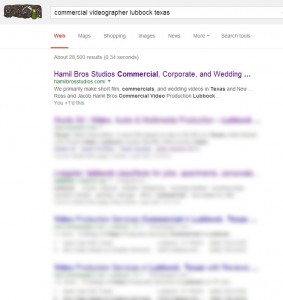 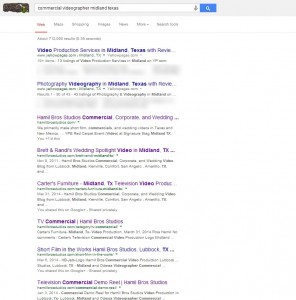 We are finally Number 1 on Google for commercial and wedding video production in Lubbock, Midland, and Odessa!

Now, the last thing we want to do is brag about this, but, anyone who has done web SEO, knows that this is a huge accomplishment and we are super proud to have achieved this.

We want to thank everyone who has encouraged us and pushed us beyond our comfort zones to help us reach a higher ground.

We also want to thank those who told us that we couldn’t do it, because you have given us incentive to prove you wrong.

We can’t wait to keep you all up to date with everything  as it comes our way and we cannot thank you all enough for the support.