It seems like only yesterday that we put out the first demo reel of our video production services. After watching it with several clients recently, it didn’t really seem to give off much of an idea of what we can really do. We do it all, from start to finish and we do our best to do it well.

When it comes to our video production, we take every step seriously.

Within reason, there is nothing we can’t do and not much we won’t do. We take your project and see it from beginning to end.

It all starts with the script. A solid script is the foundation on which any production is based on and that is where we start.

Next comes the pre-production process of storyboarding and shot-listing. In order to maximize the time “on set,” up-front organization is absolutely necessary. It’s the grease that keeps the production machine moving.

The actual video production is where the fun really begins. There is a ton of set-up and a lot of prep work. This includes staging, removing distractions from the background, lighting the subject, sometimes lighting the background, and determining the shot composition. The other thing is camera movement.

Camera movement alone is a huge deal breaker. No movement or boring movement looks cheap and amateurish. Good fluid movement like that from a crane or a dolly is where your video production goes from looking local to looking like the big guys.

Once the production is wrapped up, the post production begins. This starts with culling the footage (trashing the worst takes).

Once the edit is locked, the visual effects and motion graphics start. This goes from painting or Photoshopping things out of the scene (see the picture below) to adding 3d titles that look like they are in the room. 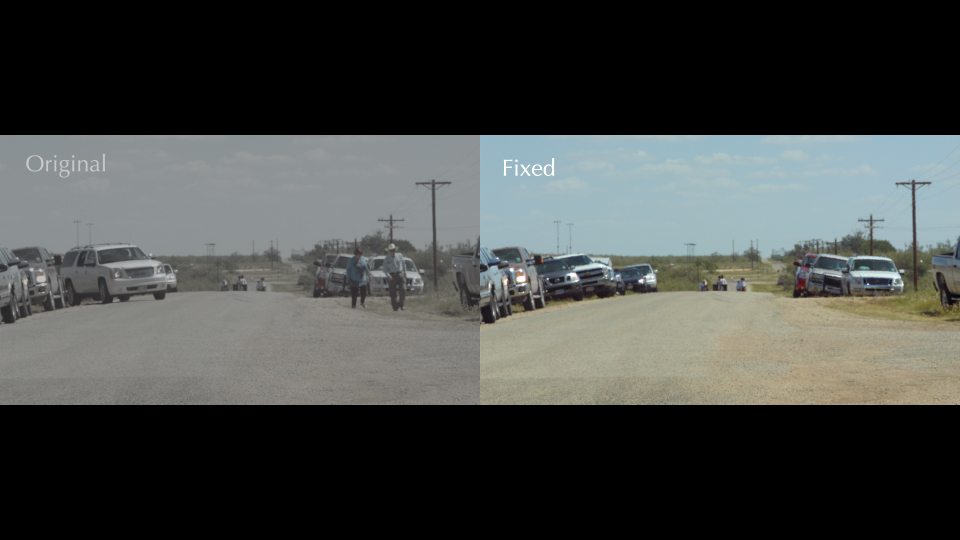 In this shot, there were some people walking down the road and a car that drove by and we had to take them out of the picture.

The VFX are then completed and it’s time for the color grade. This part is particularly fun, because this is where we take shots that already look good and really make them pop.

This is where the video production process comes to an end. The project is then rendered out to a master file and the youtube and broadcast versions are made from that where they are finally delivered to you.

The businesses that appear in the demo reel:
Carter’s Furniture (Midland)

The Sewell Family of Companies (Odessa)