Here is the most recent television commercial for The Diamond Company in Odessa, TX. 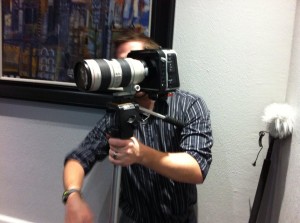 Ross Shooting with the Blackmagic Cinema Camera at The Diamond Company

One of the nicest things about our job as video producers, is that no two shoots are ever the same and that means that things rarely get monotonous. The Diamond Company was no different. We’ve been producing TV commercials in Midland and Odessa for over 3 years and this is the first time we’ve shot any jewelry.

We started around 1:30 and finished up close to 4:30. The shoot took longer than we anticipated, but, The Diamond Company’s owner, Craig Bommersbach, is so friendly and was so excited about the shoot, that it was hard not to chat while we were working.

Another nice thing about our job is that we often get to see and experience things we’ve never seen before. In the case of The Diamond Company, we got to see them melt a gold nugget and see some jewelry repair.

As we were tying up the shoot, a long-time friend of ours showed up to buy a set of earrings for his wife for mother’s day. It was great to see how Craig interacts with customers.

As a side note, I would like to point something out. I am going to try to get better at taking more behind-the-scenes shots. It would appear that I am either a camera-hog or the only one who does any work. I would like to point out, that Jacob does a ton and I never take any pictures of him doing any of it. I wouldn’t be able to do any of this without him and the value he has brought to this business far surpasses what words can explain.

Jacob and I visited Craig several times before we nailed down a shoot date. On many of those occasions, we got to see Craig working with customers. He is not only great with customers, he knows what he is talking about. He and his father are gemologists. That means they know a lot more about this stuff than I do, but, for his customers, it means that they will leave the store either knowing what they need to know about the jewelry they have purchased or what they need to know to make an educated decision on their purchase.