At Hamil Bros Studios, we are always trying to expand our versatility. Working with Robin Renfrew on her “Nations” film has really pushed us in a different direction that we had yet to explore and we are very pleased with how this film turned out.

Robin Renfrew (visit her sight here to learn more about her) is a talented poet, speaker, and encourager that approached several weeks ago with a little bit of a concept for a film in mind, but didn’t know how to execute it. She sent us an email explaining exactly that and something to the effect of it being alright if we thought she was crazy. We talked about about it and decided why not see what she wants to do and what she has to offer.About two weeks after that, we met with Robin at a Steak and Shake and had her explain to us what she wanted. As mentioned earlier, Robin is a fantastic poet and has really written some great pieces. For Robin, her sole purpose for these poems is to touch the lives of others. Whether it be charging those who read them to bigger and greater heights or simply letting someone out there know that the author has the same struggles, Robin has a knack for getting the point across very well.As we sat there, we went through 5 different poems, just to get an idea of what Robin writes and her “Nations” poem struck us to the heart the moment we saw it. Once she hooked us with the poem, it was only a matter of moments before the wheels started turning in our brains.

We had the vision and concept figured out for Robin’s “Nations” film, now it was a matter of getting it approved. We emailed Robin and asked her what she thought and she LOVED the idea. Her immediate response was “When can we start filming?” To which we replied, “We can start tomorrow!” We were really excited to see how this “Nations” film was going to turn out.

Our next mission for Robin’s film was to find a location. At the point we decided to shoot, we had less than 24 hours to find a location. We called our good friend Jimmy Henderson of Green Street Construction, because we really wanted an industrial set for the “Nations” film. Jimmy replied immediately saying he had a fellow in mind who would most likely have a warehouse available for us. Jimmy said he would contact his friend the next morning.

The following morning, Jimmy sent us the contact information of Barry Rose, the warehouse manager for Lov-Cot Warehouse . We called Barry and said we’d meet him within the hour to scout some warehouses for a location for “Nations”. We got to the location and were floored by just how perfect it was for Robin’s “Nations” film. The only problem is that the warehouse was rather old and was full of holes in the sheet metal. We decided to shoot after dark so we didn’t have to deal with the sun shining through the holes in the walls.

That afternoon, we met up with Robin to finalize that location and to prep for the “Nations” shoot. We got all the specifics like the location, shoot time, lighting schematic, camera moves, etc. locked down during our meeting and agreed to meet up later and head to the warehouse.

Once we arrived at the warehouse, the setup for “Nations” was pretty simple, but still interesting. Once we did the lighting, our next step was to set up our dolly track for our camera moves. Shooting went relatively well for “Nations” minus the fact that it was rather chilly after dark in an old cotton warehouse. We managed to keep warm and get everything shot like we wanted!

The idea was to set things up where it looked like images were being projected on the back wall. The problem lied in the fact that we didn’t have access to powerful enough projectors and the power in the warehouse probably wouldn’t have held up. So, we shaped the light to give it an interesting shape that would separate the two projections yet leave room for our faceless narrator.

The footage came out really well, but “Nations” wasn’t near finished.

From there, we had to record Robin reading the poem in a controlled environment. The warehouse was right next to the train tracks and we had train whistles blowing all evening. So, we set up a make-shift booth at our grandparents’ house and recorded a few good takes of the reading.

Robin did a fantastic job reading consistently so the syncing was easy.

After that, Ross assembled an edit and sent it out for approval. It was immediately a success. After that, every single shot had to be motion tracked in order to attach the projected images to the back wall. This took some time, but, it was very successful.

Once that was done, we hit up the internet for some stock footage to put on the back wall. The poem was, after all, entitled “Nations” with a call for Christians to reach out to the nations of the world and we needed something to show these foreign destinations.

That was it. We had it all finished. Just a few minor tweaks to finalize the film and it was done. Robin was very pleased and we couldn’t be happier.

As a side note, we mentioned that it was cold the night we filmed. Since we didn’t have a makeup artist on-site, our noses all turned pink; including Robin’s. It’s amazing what a little work in the computer can do to add a little bit of “makeup” afterward. 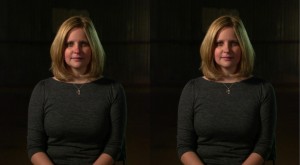 Per Robin’s Request, “Nations” is available for promotional use. If you or your organization would like to use this film to promote your upcoming missions, please contact us at [email protected] for more information on how to obtain a usage license.

As always, we appreciate your support in everything we do and we love to see your feedback either just below the post here on our website, or on either of our social medias (Facebook and Twitter).

In the meantime, enjoy our behind the scenes photos!