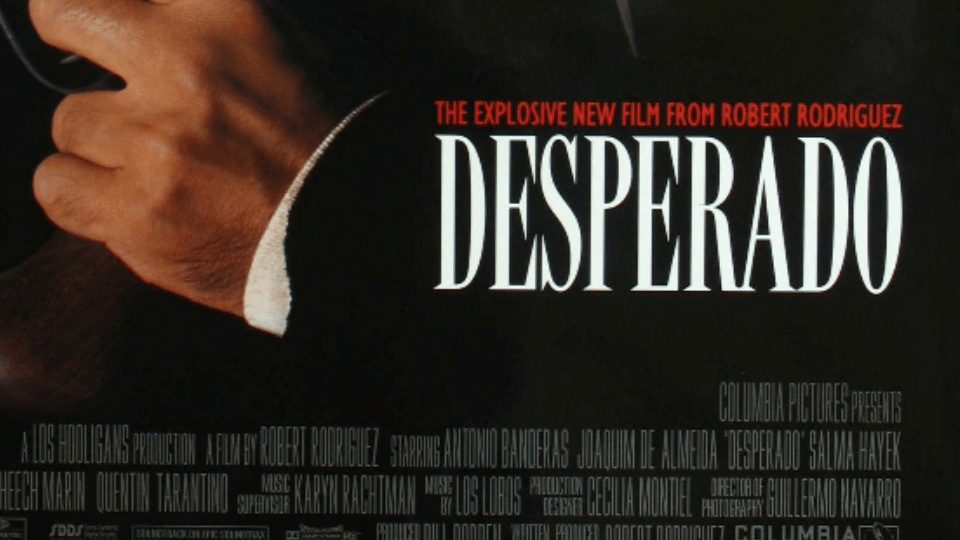 Guns!!! Explosions!!! Danny Trejo!!! What more could you want?

If you asked my why this movie is such a staple in my cinematic history, I honestly couldn’t tell you. I remember watching it with my dad years ago. Then when I was in high school, this movie was a huge part of many conversations between my friend, Cad Davis, and I, to the point that he gave me a copy of the sound track.

What does it all mean???? Nothing, really. I just really love this movie. It wasn’t until later that I learned how big of an influence that movie would be.

I have no idea how it happened, but, somehow, I stumbled upon the book “The DV Rebel’s Guide” which was a huge eye-opener on how to make action movies on the cheap. Within that book, Stu Maschwitz (more on him in a later post), referenced Robert Rodriguez, the writer, producer, and director of Desperado. He talks about Rodriguez’s first feature film, El Mariachi, the story of a mariachi who gets confused with a killer. Rodriguez made the entire film for $7,000, and it was a winner in the 1993 Sundance Film Festival, among many different accolades. The movie was so successful that he was asked to write two more, thus, Desperado and Once Upon a Time In Mexico.

Upon Stu’s referral, I picked up Robert Rodriguez’s book “Rebel Without a Crew.” It’s effectively Robert’s journal and memoir of making El Mariachi and leads into Desperado.

From there, I ate up every educational resource that Rodriguez had to offer, including his 10-minute Film Schools and watching the directors commentary on his movies.

So, let’s bring it back around to the movie at hand: Desperado. Not only had I loved this movie for a long time, I took a look at the behind-the-scenes and watched the movie with the commentary, and it gave me a new perspective and a new sense of hope for creating something of my own that could be done for little to nothing.

Directly from the influence of these movies (El Mariachi and Desperado), the vision for our first short film, The Hostage, came to fruition and ultimately became a festival winning film.

So, why even bring up El Mariachi? Well, there are more than a few references to that movie in Desperado. Can you watch one without the other? Sure. Should you? Eh… It’s up to you. If you want to be impressed by what kind of movie can be made for $7k, then watch El Mariachi.

Those movies are part of the foundation on which I built this production company. So, in a way, watching these movies is like watching a part of our history.

Watch it! Enjoy it! And for the love of movies, leave some comments below and start a dialog. We want to know what you think!