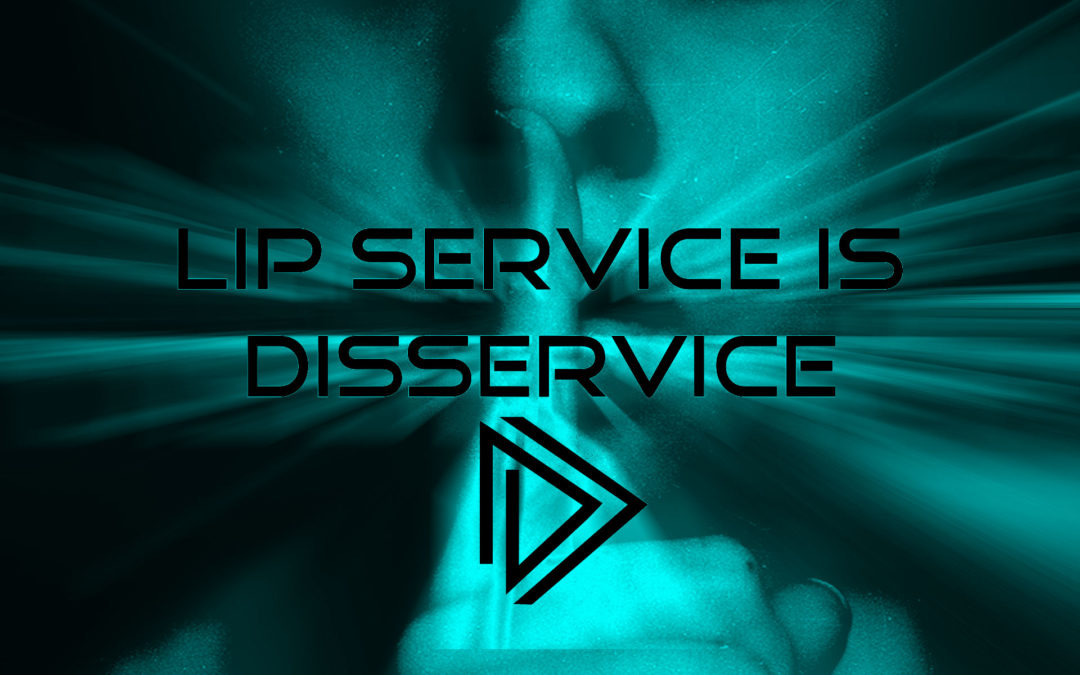 Probably sounds like a no-brainer, but, this has really hit hard as of late. If you’re delivering lip service you are doing your clients a disservice.

As business owners, especially starting out, we try desperately to say the right things to get customers and clients to hire us or buy into our services. We’re in business and (most business owners) want to acquire business ethically. You don’t want to cheat, but, you’re willing to take a few shortcuts, and there’s nothing wrong with that. As long as shortcuts are effective, and they don’t affect your integrity, that’s simply efficiency.

The problem is, some of these shortcuts are costing you better business. Lip service is one of those things. What’s worse, is it could be costing you relationships.

In the marketing world, we see more “digital marketers” who are nothing more than bandwagoners. One week Technique A is the most effective strategy ever and if you’re not doing it “it could be costing you business.”

The next week, Technique B is far superior and if you haven’t moved on from Technique A, then, you guessed it, “it could be costing you business.”

The issue is that it’s impossible to keep up. I get (at least) a dozen inbox messages on LinkedIn from new connections who can help us grow our social media presence using the latest and greatest whatever. The thing is, they don’t give a crap about helping anyone grow anything. All they want to do is take our money, give us some short-term results and leave us flat.

Now, if you’re reading this, I’m assuming this isn’t you. You’re a rockstar and on your way to becoming something great.

That doesn’t mean, though, that you’re not just saying what you think you need to say to get the job.

We’ve been very guilty of it, even up until recently. However, we’ve done a lot of reflecting. We’ve taken a hard look at the work we’ve been doing and who we’ve been doing it for. Some jobs, we get the offer and we just see dollar signs. We do work that we don’t enjoy and, frankly, we’re not good at. Sure, we can get the job done, but, in the end, we’re just taking work from someone who may charge less, but, they find purpose in it. That kind of fulfilment is worth way more than a large invoice and I don’t want to take that away from anyone.

While I can’t speak for Jacob, I do feel that I can speak on our behalf and say that we’ve taken a step back and have re-evaluated why we got into doing video in the first place.

For me, it started in high school. I had to deliver a video project and wanted people to enjoy it. I knew I didn’t enjoy the example projects that I was watching and I wanted to do better. It wasn’t from a place of wanting to one-up everyone. I knew that if my peers enjoyed the video, they would pay more attention, and, ultimately, they would learn more. I also wanted to have fun that I could share with others who watched the project.

What was my place? I wasn’t sure, but, I knew I wanted to make something better. Since then, I’ve figured it out. It took a while because I can be a bit dense sometimes, but, I got there.

I get to wake up and do what I love doing, and help others do what they love doing. Ideally, I help them earn enough money to keep doing it.

I do that by giving them a voice that will be heard by the people who need to hear it.

When we lose sight of that, we find ourselves regretting. No amount of money is worth getting lost.

We’ve actually been asked this year what is different about us. Hamil Bros Studios is taking on a different direction. Not externally, but, definitely internally.

I think this is because we have taken a hard look at why we got into this business to begin with: to do things we didn’t think were possible for people who needed the impossible. You add to that that we were told we should give up because we would never make it, and you have a cocktail recipe for drive, motivation, and stupid humor that defies logic.

What we’ve learned, is that when we’ve given lip service and land a job, we lose what is it that makes us what we are.

My recommendation, don’t do it. You’re doing a disservice to yourself and to your customers, and, in the process, you can break down relationships that you’ve worked really hard to build.

Leave a comment below about times that lip service has either cost you business or you ended up regretting work because of it. Then tell us how you plan to avoid that in the future!