Don’t Let Them Take Advantage of You: A Letter to Creatives 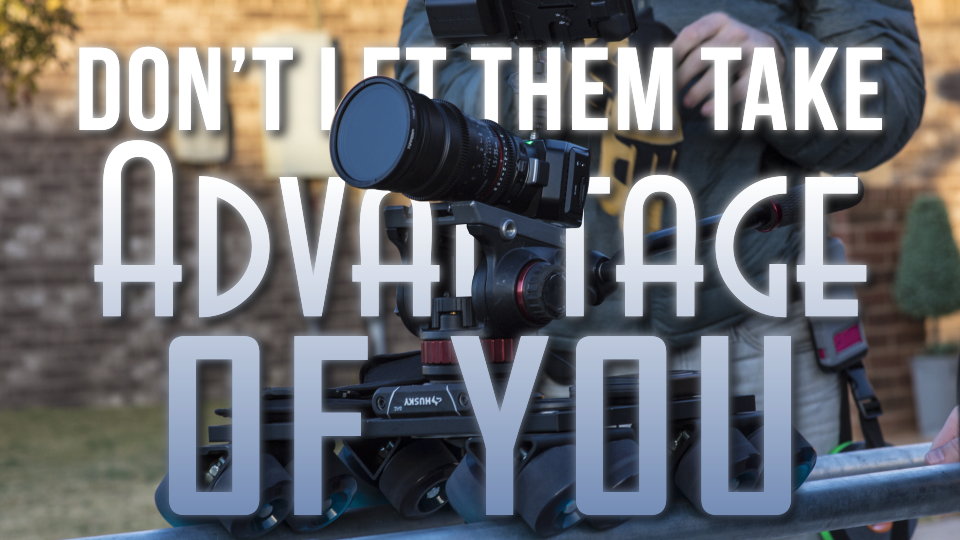 If there is a pet peeve of mine in the small-business, freelance, and creative world, it’s when people try to take advantage of us. When I say us, I mean those of us who work hard for our livelihood.

What, you may ask, has spawned this little soapbox rant? Easy, we received an email today that was not only insulting, but, it was a job designed by a company who takes advantage of freelancers.

How insulting can it be? I’ll share it below (names have been changed to protect the guilty).

I work for a company called Advantage Takers, LTD. We are a company that creates videos for communities and businesses across the country. Whenever needed, we like to hire freelance videographers in the various locations we work in.
We currently have a shoot in Midland, TX.
I am not sure how far you live from Midland, but we are looking for a videographer within 60 miles, but are willing to branch out farther if needed. If you’re interested, please let me know as soon as you can. We only require you to get the Footage, all editing is done in-house.

I’ve got to tell you, this really made my blood boil. Why? Because, their request is completely unreasonable. How is it unreasonable? Let’s break this down.

So, using the numbers from the above email, let’s take a look, shall we?

Let’s say that a freelancer hasn’t decided what their time, alone, is worth per hour. What we can put a tangible number to is the value of the equipment on set.

I’ll use the formula that we have often used based on input we get from other industry professionals. We either A) look at equipment rental prices, or B) we charge a percentage based on the replacement value of the gear (we’ve heard 10% is a good starting point).

So, a freelancer needs a few basic things in order to do a basic shoot. Let’s see what this turns into:

These are all retail purchase prices. The value of the gear on-set for one day at 10% is $1516.57. At 10%, that’s approximately $151.66 (rounded up) per day that the freelancer should make just to cover wear-and-tear on the equipment.

That’s already more than the proposed 2-hour shoot at $135.

Let’s look at the other flaws in the proposition. First, this company is only taking shooting time into account. This won’t include set-up or tear-down. With this basic setup, you could easily be looking at 1.5 more hours if the freelancer is setting up the camera lighting all by themselves. Meaning, they are putting in more work time than they are being paid for. The other issue is that they’re paying reduced rates on a curve as the time goes up. While this is not uncommon, it’s only appropriate if the rate is already fair.

If we break it down to $135 at 3.5 hours (including set up time which should be paid for), this comes out to roughly $38.57 an hour. I don’t know about you, but, that actually sounds pretty good. And that’s what they want you to think. But, you have to be smarter than this.

They already have to deduct for the equipment which puts them at negative, but, if they simply pocketed all of the money, they still have to take into account all of their business expenses.

Now the above email does state that they will pay mileage, but, let’s be honest, that number is a freaking joke. I looked it up, the IRS standard for mileage reimbursement for 2017 was $0.535 per mile. This company’s proposed number is $0.345 per mile. Fun fact, that was the mileage reimbursement in 2001 and it has not been that low since. So, they’re already cheating the freelancer out of travel expenses, if the freelancer is traveling.

Simple. How did this company reach out to the freelancer? In this case it was email. But the email was free right? Possibly, unless the freelancer has their own domain, then they are paying for the domain plus an email platform. For us, it runs to about $11 a month. Not bad, that’s definitely not enough to offset the $135/hour, but, how did that email get delivered? DING DING DING!!! The internet, which we all know isn’t free. So, that freelancer either got that email either via their home internet, which costs a monthly due, on a computer, which wasn’t free, or via their smartphone. Unless, this freelancer is in the minority, they probably have a payment plan on their phone and they have a monthly phone bill. That money is starting to eat up some of that hourly. But, not all of it, right? Right. However, it doesn’t stop there. Let’s assume that this freelancer gives a crap and puts time into educating themselves. Sure, with Youtube, there is a ton of free stuff out there, but, again, phone and/or internet bills (probably both because we are talking about a creative freelancer).

However, there are a ton of non-free educational resources that are far better than what you can get for free, and we have yet to meet any freelancers who haven’t paid for education in some form or fashion. What if the freelancer went to college and got a degree. Unless they are unusual, they are probably paying off student loans monthly. Yeah… That $135 isn’t going terribly far after that payment.

And still, it goes further. Did this freelancer finance their equipment? There’s a decent chance, so, at that point, you literally have an out-of-pocket, monthly expense for the equipment!

What else? Well, this freelancer has to market themselves somehow. With Facebook and such, it’s a little easier, but, if there’s a website involved, there’s a cost involved.

The last thing, is that freelance work isn’t terribly consistent. So, that $135 needs to offset the working time that is not bringing in money (maybe like time spent writing blog posts about the cost of doing business).

So, while I’ve done my fair share of hammering on this company, I want this to be an eye-opener for you creatives and freelancers to really look deep into the details and see what all you have to consider before you take the job that sounds like an easy $135 for two hours.

We preach this frequently: YOU DETERMINE WHAT YOU’RE WORTH.

I also don’t want anyone to mistake this for charity or passion work. There have been plenty of times that we, Jacob and I, have worked for well under our required rate for a project or movement that we are passionate about. It’s one thing if the client CAN’T afford it. It’s another if they WON’T afford it.

Ultimately, at the end of the day, it’s your decision, but, don’t get caught complaining that you just aren’t making any money if these are the types of jobs you’re taking on.

These companies aren’t there to help freelancers, they are there to take advantage. KNOW THE DIFFERENCE.